The Story of Abraham (part 1 of 7): Introduction

Description: An introduction to the person of Abraham and the lofty position he holds in Judaism, Christianity, and Islam alike. 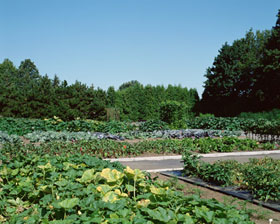 One of the prophets given the most attention in the Quran is the prophet Abraham.  The Quran tells of him and his unwavering belief in God, first calling him to reject his people and their idolatry, and later to prove true to various tests which God places before him.

In Islam, Abraham is seen as a strict monotheist who calls his people to the worship of God alone.  For this belief, he bears great hardships, even disassociating himself with his family and people through migration to various lands.  He is one who fulfills various commandments of God through which he is tested, proving true to each one.

Due to this strength of faith, the Quran attributes the one and only true religion to be the "Path of Abraham", even though prophets before him, such as Noah, called to the same faith.  Because of his tireless act of obedience to God, He gave him the special title of "Khaleel", or beloved servant, not given to any other Prophet before.  Due to the excellence of Abraham, God made prophets from his progeny, from them Ishmael Isaac, Jacob (Israel) and Moses, guiding people to the truth.

The lofty status of Abraham is one shared by Judaism, Christianity and Islam alike.  The Jews see him to be epitome of virtue as he fulfilled all the commandments although before they were revealed, and was the first to come to the realization of the One True God.  He is seen as the father of the chosen race, the father of prophets due to which God started his series of revelations.  In Christianity, he is seen as the father of all believers (Romans 4:11) and his trust in God and sacrifice is taken as a model for later saints (Hebrews 11).

As Abraham is given such importance, it is worthy that one study his life and investigate those aspects which raised him to the level which God gave him.

Although the Quran and the Sunnah do not given the details of the whole life of Abraham, they do mention certain facts worthy of note.  As with other Quranic and biblical figures, the Quran and Sunnah detail aspects of their lives as a clarification of some misguided beliefs of previous revealed religions, or those aspects which contain certain mottos and morals worthy of note and emphasis.

In the Quran, the only name given to Abraham is "Ibraheem" and "Ibrahaam", all sharing the original root, b-r-h-m.  Although in the Bible Abraham is known as Abram at first, and then God is said to change his name to Abraham, the Quran has kept silent on this subject, neither affirming nor negating it.  Modern Judeo-Christian scholars do doubt, however, in story of the changing of his names and their respective meanings, calling it "popular world play".  Assyriologists suggest that the Hebrew letter Hê (h) in the Minnean dialect is written in stead of a long ‘a’ (ā), and that the difference between Abraham and Abram is merely dialectical.[1] The same can be said for the names Sarai and Sarah, as their meanings are also identical.[2]

Abraham is estimated to have been born 2,166 years before Jesus in or around the Mesopotamian[3]  city of Ur[4], 200 miles southeast of present-day Baghdad[5].  His father was ‘Aazar’, ‘Terah’ or ‘Terakh’ in the Bible, an idol worshipper, who was from the descendants of Shem, the son of Noah.  Some scholars of exegesis suggest that he may have been called Azar after an idol he was devoted to.[6]  He is likely to have been Akkadian, a Semitic people from the Arabian Peninsula who settled in Mesopotamia sometime in the third millennium BCE.

It seems as if Azar migrated along with some of his relatives to the city of Haran in the early childhood of Abraham before the confrontation with his people, although some Judeo-Christian traditions[7]  tell it to be later in his life after he is rejected in his native city.  In the Bible, Haran, one of the brothers of Abraham is said to have died in Ur, "in the land of his nativity" (Genesis 11:28), but he was much older than Abraham, as his other brother Nahor takes Haran’s daughter as a wife (Genesis 11:29).  The bible also makes no mention of the migration of Abraham to Haran, rather the first command to migrate is that out of Haran, as if they had settled there before (Genesis 12:1-5).  If we take the first command to mean the emigration from Ur to Canaan, there seems to be no reason that Abraham would dwell with his family in Haran, leaving his father there and proceeding to Canaan thereafter, not to mention its geographical improbability [See map].

The Quran does mention the migration of Abraham, but it does so after Abraham disassociates himself from his father and tribesmen due to their disbelief.  If he had been in Ur at that time, it seems unlikely that his father would go with him to Haran after disbelieving and torturing him along with his townspeople.  As to why they chose to migrate, archaeological evidence suggests that Ur was a great city which saw its rise and fall within the lifetime of Abraham[8], so they may have been forced to leave due to environmental hardships.  They may have chosen Haran due to it sharing the same religion as Ur[9]. 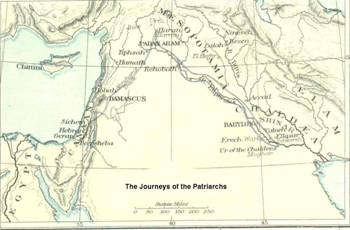 The Religion of Mesopotamia

Archeological discoveries from the time of Abraham paint a vivid picture of the religious life of Mesopotamia.  Its inhabitants were polytheists who believed in a pantheon, in which each god had a sphere of influence.  The large temple dedicated to the Akkadian[10]  moon god, Sin, was the main centre of Ur.  Haran also had the moon as the central godhead.  This temple was believed to be the physical home of God.  The chief god of the temple was a wooden idol with additional idols, or ‘gods’, to serve him. 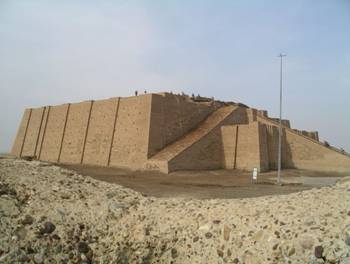 The Great Ziggurat of Ur, the temple of moon god Nanna, also known as Sin.  Shot in 2004, the photograph is courtesy of Lasse Jensen.

Although Judeo-Christian scholars have differed as to when Abraham came to know God, at the age of three, ten, or forty-eight[11], the Quran is silent in mentioning the exact age at which Abraham received his first revelation.  It seems it was, however, when he was young in age, as the Quran calls him a young man when his people try to execute him for rejecting their idols, and Abraham himself said to have knowledge not available to his father when he called him to worship God alone before his call spread to his people (19:43).  The Quran is clear, however, in saying that he was one of the prophets to whom a scripture was revealed:

[3] Mesopotamia: "(Mes·o·po·ta·mi·a) An ancient region of southwest Asia between the Tigris and Euphrates rivers in modern-day Iraq. Probably settled before 5000 B.C., the area was the home of numerous early civilizations, including Sumer, Akkad, Babylonia, and Assyria." (The American Heritage® Dictionary of the English Language, Fourth Edition
Copyright © 2000 by Houghton Mifflin Company.
)

[4] The ancestor of the Hebrew people, Abram, was, we are told, born at "Ur of the Chaldees." "Chaldees" is a mistranslation of the Hebrew Kasdim, Kasdim is the Old Testament name of the Babylonians, while the Chaldees were a tribe who lived on the shores of the Persian Gulf, and did not become a part of the Babylonian population till the time of Hezekiah. Ur was one of the oldest and most famous of the Babylonian cities. Its site is now called Mugheir, or Mugayyar, on the western bank of the Euphrates, in Southern Babylonia. (Easton’s 1897 Bible Dictionary). Some Judeo-Christian scholars say that the "Ur-Kasdim" mentioned in the Bible is nor Ur, but actually the city of Ur-Kesh, located in northern Mesopotamia and closer to Haran (From Abraham to Joseph - The historical reality of the Patriarchal age. Claus Fentz Krogh. (http://www.genesispatriarchs.dk/patriarchs/abraham/abraham_eng.htm).

[5] Ibn Asakir, a famous Muslim scholar and historian, also authenticated this opinion and said that he was born in Babylon. See "Qisas al-Anbiyaa" ibn Katheer.

[7] Since there is little detail about the life of Abraham in the bible, much of what is commonly believed about Abraham is formed through various Judeo-Christian traditions, collected in the Talmud and other rabbinical writings. Much of what is mentioned in the bible as well as other traditions is regarded amongst Judeo-Christian scholars as legends, much of which cannot be substantiated. (Abraham. The Catholic Encyclopedia, Volume I. Copyright © 1907 by Robert Appleton Company. Online Edition Copyright © 2003 by K. Knight Nihil Obstat, March 1, 1907. Remy Lafort, S.T.D., Censor. Imprimatur. +John Cardinal Farley, Archbishop of New York.) (Abraham. Charles J. Mendelsohn, Kaufmann Kohler, Richard Gottheil, Crawford Howell Toy. The Jewish Encyclopedia. (http://www.jewishencyclopedia.com/view.jsp?artid=360&letter=A#881)

Thank you for making these information available on the Internet.