The Ones Who Perished (part 1 of 2): The Fate of the People of Noah, Sheba, Iram and Salih

Description: Intriguing accounts of some of the past nations mentioned in the Quran and their prophets, along with various archaeological evidence supporting it.  Part 1.

“Each one of them We seized for their crime: against some We sent a violent tornado, some were caught by a mighty blast; some we caused the earth to swallow up, and some We drowned It was not God Who wronged them, but they who wronged themselves.” (Quran 29:40)

Noah and the Ark 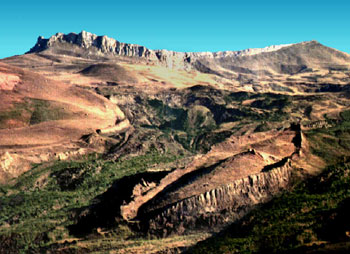 An archeological study found the above 500 foot-long boat-shaped formation atop Mount Judi[1], some 20 miles south of Mount Ararat (where the Bible places the Noah’s Ark).  It has horizontal deck-support timbers at consistent intervals and evenly-spaced indentations resembling decaying rib timbers.  Natural causes do not make such symmetrical formations!

All the wicked peoples of the earth were drowned while believer and beast were carried with Noah in his Ark.  The ship remained intact upon Judi right until the dawn of Islam.  What has remained today is still a thing to behold.

The Temple at Sheba

Another people whose sins were answered with a devastating flood were the People of Saba’ (Sheba).  They turned away from the Creator, God, to worship others.  Now, all that remains of their once prosperous civilization (at Marib, Yemen) are the broken sluices of their dam, some Sabaean inscriptions, and the ruins of their temple.[2]  (below).

“Indeed, there was a sign for Sheba in their dwelling place: two gardens on the right and on the left.  (It was said to them,) ‘Eat of the provision of your Lord, and be grateful to Him, a fair land and an Oft-Forgiving Lord.’  But they turned away (from God and became corrupted).  So We sent against them the unleashed dam waters, and converted their gardens into gardens bearing bitter fruit and tamarisks, and a meager few lote-trees.  That is how We rewarded them because they were ungrateful.  And never do We reward in such a way except those who are ungrateful.” (Quran 34:15-17)

The ‘Ad were a nation of giants.  ‘Who is mightier than us in strength?!’  (Quran 41:15), they would boast, tyrannizing people with their huge size while the Prophet Hud would command them to fear God and be righteous.  For most historians, the story of Iram[3]  was pure fable, a myth, an ‘Atlantis of the Sands.’ 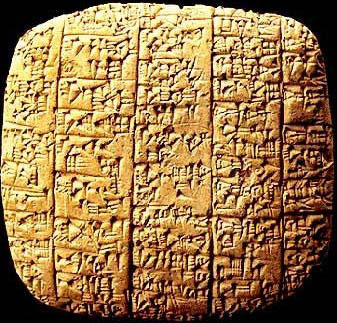 Until 1973, that is, when the 4,300 year-old city of Ebla was excavated in northern Syria.  Some 2,500 cuneiform clay tablets (above) were recovered from Ebla’s palace library, containing records of all the nations Ebla traded with, including one called ‘Iram’![4]

“(Hud said to ‘Ad,) ‘Do you build monuments on every high place for amusement, and take yourselves palaces as if you will live therein forever?” (Quran 26:128-129) 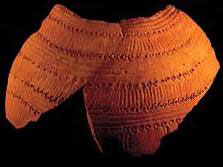 In 1992, using satellite images, the relics of a city correlating with the Quranic location and description of Iram were discovered deep beneath the desert on the edge of Oman.  The city’s wealth was evidenced by frankincense burners, Parthian pottery (above) and the 90cm-thick walls guarding them. 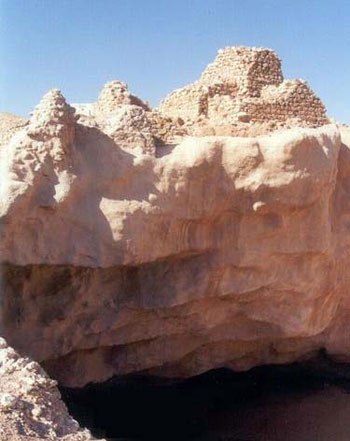 Excavations also showed that the city met with a catastrophic end when it half-collapsed into a giant sinkhole, above which the ruins of a fortress and eight once-towering pillars still stand (above).  The ‘Ad were destroyed by a force of nature even fiercer than themselves.[5]

“So We sent to them a ferocious wind in evil days; that We might give them a taste of disgracing punishment in this world.  And the punishment of the Hereafter is more disgracing, and they will not be helped.” (Quran 41:16) 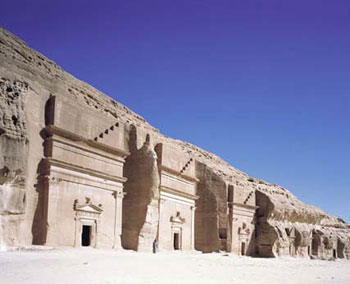 The People of Thamud

“(Salih said to Thamud,) ‘Will you remain secure in what you have here?  In gardens and springs, well-tilled fields and date- palms heavy with fruit; and while you hew dwellings out of mountains with such great skill?” (Quran 26:146-149)

“And to Thamud (We sent) their brother (Prophet) Salih.  He said: ‘O my people!  Worship God, you have no god (in truth) but Him.  He brought you forth from the earth and settled you therein.  So ask forgiveness of Him and turn to Him in repentance.  Certainly, my Lord is Near, Responsive.’  They said: ‘O Salih!  You had been among us as a figure of hope (as a future leader) till this (calling of yours to monotheism)!  Do you (now) forbid us the worship of what our fathers worshipped?  We are indeed in doubt as to that to which you invite us.” (Quran 11:61-2)

Prophet Muhammad passed by the ghost town of Madain Salih [ABOVE & BELOW], cut from mountain rock by Thamud, saying:

“Do not enter except that you are weeping, for this was a place of (divine) punishment.”

Kindred to the Nabateans of Petra some 300 miles to their north, Thamud violently rejected Prophet Salih.  So God struck them with a sonic blast that killed them, but spared their homes:  A truly eerie sign for later generations. 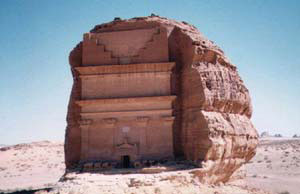 [5] Around A.D. 300, a city called Ubar—a bustling center along the frankincense trade routes of ancient Arabia - mysteriously disappeared.  According to legend, the people of Ubar became greedy and corrupt, refusing to change their ways.  To punish them, God destroyed the city and erased all roads leading to it.  Ubar was lost for thousands of years, but the legend lived on in Bedouin campfire stories, the Quran, and Arabian Nights.  Many archaeologists believed the legend of Ubar was more than a tale, but searches for the lost city came up empty.  That is, until the 1990s when NASA satellites and radar aided the hunt.  NASA’s help proved to be the key to locating Ubar.  Images from Landsat and SPOT (Satellite Pour l‘Observation de la Terre) remote sensing satellites showed tracks through the desert, identified as old caravan routes.  These tracks converged at the village Al Shisr in the southwestern corner of Oman.  An expedition followed the tracks to the virtual “X” in the sand and began digging.  Discoveries of ancient pottery shards from distant lands, frankincense burners, and remains of a fortress confirmed the archaeologists’ suspicions—Ubar was real and its demise could be explained.  Indeed, the legend was right: Ubar met a catastrophic end.  Excavation revealed a giant limestone cavern beneath the fortress.  The city most likely was destroyed when a large portion of it collapsed into the chamber below.  Today, excavations continue to discover more about life along the frankincense road over 4,000 years ago. (by Marisa Larson, National Geographic Magazine, http://magma.nationalgeographic.com/ngm/0304/feature2/index.html)

Next: The Ones Who Perished (part 2 of 2): The People of Moses and Lot

I found those 2 articles ''The One Who Perished'' very enlightening. Thank You Lilianne