Literacy in Islam (part 1 of 3): Books in Baghdad 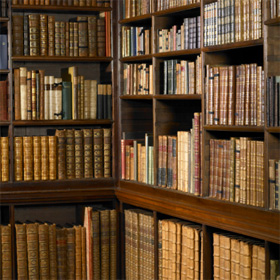 Baghdad was hit by a series of explosions.  The city raked by violence.  Baghdad equals chaos, death, and destruction.  Baghdad is a city screaming in pain and dying in the smokescreen.  As we watch the tangled mess on our television screens, it is hard to imagine that Baghdad was once a great seat of learning.  Baghdad and books have been synonymous for hundreds of years.  Bookshelves line family homes and booksellers line the streets of Baghdad.  Even now, amidst the rubble and pandemonium the residents of Baghdad shop for books.  “It is an old disease in Iraq – people spend their money on books, not on food,” jokes an Iraqi translator for NBC News[1].

In the period, that western history has come to call the Dark Ages, the love affair between Baghdad and books began.  In a time when churches across Europe felt themselves fortunate to have a library consisting of several books, there was a street in Baghdad lined with more then 100 shops, each selling books, stationary, or both.  Across the western world, literacy was restricted to the rich or religious authorities, but in Baghdad, the people had access to more then 30 libraries.

Within 200 years after the death of Prophet Muhammad, the small Islamic nation grew into an Empire that stretched from North Africa to Arabia, from Persia to Uzbekistan and pushed onwards to the frontiers of India and beyond.  Around 750CE Baghdad, the city built on the banks of the Tigris River was established as the capital of the Islamic empire.  Its location connected it to countries as far away as China, and Baghdad soon became not only the political and administrative centre but also the hub of culture and learning.

Men and women from all parts of the Empire flocked to Baghdad and brought with them knowledge from the far corners of the known world.

Muslims, Jews, Christians, Hindus, Zoroastrians, and even people from other more obscure faiths lived in Baghdad.  Books began to symbolise life of Baghdad.  The streets were alive with authors, translators, scribes, illuminators, librarians, binders, collectors, and sellers.  However, these people from such diverse backgrounds need to be connected.  Arabic developed as the language of scholarship and the connection was established.

The works of Plato, Aristotle, Ptolemy, and Plutarch among many others were translated into Arabic.  Jewish philosophers used Arabic translations of Greek philosophical works to write their own treatise and essays.  When Europe began to emerge from the Dark Ages into a period of enlightenment, they relied on books written in Arabic to redeem and reclaim the foundations of the Western empire.

Many of the original books translated in Baghdad were lost or destroyed in their home countries, and remained only in their Arabic translations.  The scholars of Baghdad were responsible for preserving classical works from the Greeks, Romans, and Egyptians and even translated classics from Persia, India and China.  These great works were then translated from Arabic back into languages such as Turkish, Persian, Hebrew, and Latin. Catholic theologian, Thomas Aquinas made his famous integration of faith and reason after reading Aristotle’s philosophy in a translation by Baghdad scholars.

The scholars of Baghdad not only collected and synthesised the great works, they added to the body of knowledge.  They opened up new fields of scholarship, such as celestial mechanics, and introduced the world to algebra and geometry.  A Baghdad scholar produced an ophthalmology textbook, believed the world’s first medical book containing anatomical drawings.  It was the definitive work in both the east and west, and was used for more than eight centuries.

As Baghdad transformed itself into a centre of learning Caliph, Harun Al Rashid, and his son, al-Mamoon, opened one of history’s most renowned think tanks, Bayt al Hikmah, or the House of Wisdom.  The scholars at the House of Wisdom, unlike their modern counterparts, did not "specialize.”  Al-Razi was a philosopher and a mathematician as well as a physician, and al-Kindi, wrote on logic, philosophy, geometry, calculation, arithmetic, music, and astronomy.  Among his works were such titles as The Reason Why Rain Rarely Falls in Certain Places, The Cause of Vertigo, and Crossbreeding the Dove.

The historian al-Maqrizi described the opening of the House of Wisdom in 1004 CE.  “The students took up their residence.  The books were brought from [many other] libraries ... and the public was admitted.  Whosoever wanted was at liberty to copy any book he wished to copy, or whoever required to read a certain book found in the library could do so.  Scholars studied the Quran, astronomy, grammar, lexicography and medicine.  The building was, moreover, adorned by carpets and all doors and corridors had curtains, and managers, servants, porters, and other menials were appointed to maintain the establishment.”[2]

Books have always played a role in the life of Baghdad.  In 11th century CE Baghdad ,  a manuscript “... was about the size of the modern book, containing good quality paper with writing on both sides, and bound in leather covers”.  An average bookshop contained several hundred titles including the Quran and commentaries on the Quran, languages and calligraphy, Christian and Jewish scriptures, histories, government works, court accounts, pre-Islamic and Islamic poetry, works by various schools of Muslim thought, biographies, astronomy, Greek and Islamic medicine, literature, popular fiction, and travel guides (to India, China, Indochina).[3]

Today, as the bombs explode around them and their world falls into an abyss, the people of Baghdad hold on to their literary heritage.  Amongst the rubble, the booksellers ply their trade and the citizens of Baghdad make choices between reading and eating.  This however is not surprising for Islam has a long tradition of literacy.  The first word of Quran revealed to Prophet Muhammad was iqra – read, learn, and understand  In part two we will go on a journey of discovery to see what the Quran and the authentic traditions of Prophet Muhammad say about literacy and seeking knowledge.

Next: Literacy in Islam (part 2 of 3): Seeking Knowledge