Chapter 112: One Third of the Quran

Description: An interpretation of chapter 112 which revolve around the concept of God in Islam. 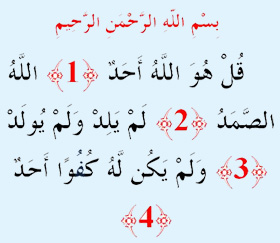 (1)  Say: “He is Allah, the Unique.” This verse represents Allah’s own affirmation of His unique Monotheism, His inimitable Oneness.  Thus, the first verse is a command to the Prophet, may the mercy and blessings of God be upon him, and whoever reads or recites this verse to affirm Allah’s Unique Oneness.  He is one like whom there is no other.  There are many unities in this world, but they all are not unique as each unity has others similar to them.  For example, there is one Mount Everest, but there are other tall mountains similar to it.  In the case of Allah, there is no other unity similar to Him.  All other unities can be divided into parts, while Allah is unique in His Oneness and is as such indivisible.

(2)  Allah, the Self-Sufficient.  Allah’s uniqueness is realized in His self-sufficiency.  On the other hand, all created beings have ne eds and are dependent on others to fulfill their needs.  Allah is not in need of any of His creation in any way, as nothing they can do can better or benefit His already perfect state.  This attribute of self-sufficiency invites the believers to reflect on the purpose and the goals of their worship.  Most people worship as if they are doing God a favor.  The purpose of human creation is to worship Allah because all human beings have a need to worship Him.  He has no need for or from them.  Human beings need to worship and glorify God because obedience to divine law is the key to their success in both this life and the next.

(3)  “He does not give birth, nor was He born.” This verse describes another aspect of Allah’s Unique Oneness.  False religions generally represent God in human terms by either giving Him human characteristics and or human form.  This verse deals primarily with two distinct characteristics of human beings and other living creatures in general: coming into existence by being born and procreating by giving birth.  “He (Allah) does not give birth,” because there is nothing similar to him.  A child is made from portions (sperm and ovum) of the bodies of its parents which is why it is similar to its parents in form and characteristics.  If God gave birth, there would be another god like Him, which His uniqueness has already negated.  The Almighty also rejected the concept of having a child from the perspective that bearing offspring usually requires a female partner similar in form to the male.  Allah also rejected offspring from the general perspective that it is not befitting, since to have a child would reduce him to the status of His creatures.  This answers the question of those who claim that since it is agreed that God can do anything, He should be able to have a son if He wished.  It is not befitting because it would make God like His creatures.  Furthermore people have children out of a need for help to survive in this material world or out of the need for continued existence through one’s progeny.[1]  By describing Himself as self-sufficient, Allah also negated this possibility.

“Nor was He born” subtly rejects the notion that Jesus was God, because he was born.  For God to be born, He must first have not existed, which contradicts the basic unique divine attribute of eternal existence.

(4)  “And there is nothing equal to Him.” Allah closes the chapter with a restatement of the opening verse.  If God is unique, nothing can be equal to Him.  If nothing is equal to Him, then He alone is unique.  If He alone is Self-Sufficient and all creation is in need of Him, nothing in creation can be equal to Him.  If He does not bear offspring, nor did anyone or anything give birth to Him, nothing or no one can be equal to Him as every created being came into existence after a period of non-existence.  Every created being has something similar to it, called its pair, or something resembling it, called its equal.  If the Creator were from one or other of these species He would have an equal and a similitude.

Thus, this chapter contains the genealogy and description of God, the Most Merciful.  It was revealed by Allah to refute beliefs attributed to Him by misguided people concerning His similitude, form, origin and offspring.  For example, those who paint pictures or make statues of Allah are claiming similitude, those who worship others besides Him claim similitude, and those who attribute some parts of His creation to others besides Him claim similitude.  However, nothing is similar to Him in His Attributes, His Dominion or His Divinity.  Therefore, only He alone deserves to be worshipped by His creatures.

“Allah-us-Samad [Allah (God) the Self-Sufficient Master, Whom all creatures need, (He neither eats nor drinks)].  (2)

“And there is none co-equal or comparable unto Him.” (4)

(1)  “Say” a decisive statement which you believe in and be aware of, “He is Allah (God), (the) One” which means, the oneness is confined to Him, He is the one who alone possesses perfection, Who has the most beautiful names and perfect supreme attributes,.  He is unparalleled and matchless.

(2)  “Allah-us-Samad” [Allah the Self-Sufficient Master] whom all creatures need. All the inhabitants of the upper and lower world are in utmost need of Him.  They ask Him for their needs, and seek Him for their concerns, because He is perfect in his attributes, He is the all-knowing whose knowledge is perfect, He is the most-forbearing whose forbearance is perfect, the most-merciful whose mercy is perfect.

(3)  And of his perfection that “He begets not, nor was He begotten” due to the perfection of his opulence [freedom of all needs]

(4)  “And there is none comparable to Him.” Neither in His names and attributes nor in His deeds.  Far removed is He from every imperfection.

So this Chapter establishes the oneness of God.

Mashallah, A significant and conclusive article. Dr Phillips has explained in clear terms the Oneness and Uniqueness of Allah.