The Ones Who Perished (part 2 of 2): The People of Moses and Lot

Description: Intriguing accounts of some of the past nations mentioned in the Quran and their prophets, along with various archaeological evidence supporting it.  Part 2.

For well over a thousand years, the only ‘Haman’ that was mentioned outside Islamic texts was a Babylonian courtier from the story of the Tower of Babel.  Academics derided his mention in the Quran, citing it as proof of Muhammad’s supposedly inaccurately borrowing from the bible; mixing up the Babylonian legend with the much earlier story of the Exodus. 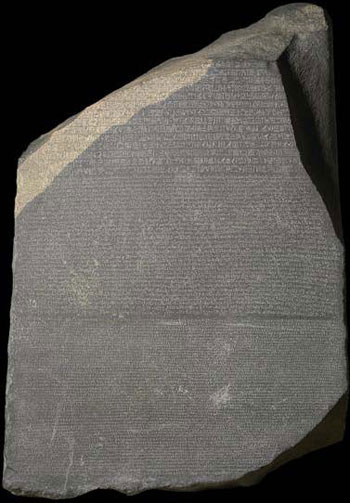 Then, in 1799, one of Napoleon’s captains in Egypt discovered a dark grey-pinkish granite stone (above) in the port city of Rosetta.  He showed it to General Abdullah Jacques de Menou, a convert to Islam, who sent it off to Cairo to be studied.  The Rosetta Stone, which dated back to 196 BC, was inscribed in three scripts: Hieroglyphic, Demotic and Greek.  Its discovery meant that scholars the world over were finally able to decipher Egyptian hieroglyphs.  One result was the decoding of an inscription on a Pharaonic stela from the Mosaic period in Vienna’s Hof-Museum.  Curiously, the name ‘Haman’ was inscribed on the stela[1], his given title: ‘chief of the stone quarry workers.’[2]  Precisely the man whom a Pharaoh would ask to build a high tower!

“And (We punished) Korah, Pharaoh and Haman.  And indeed Moses came to them with Clear Signs.  But they sought greatness in the land, while they could not outreach (the wrath from) Us.” (Quran 29:39) 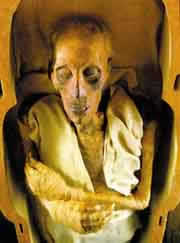 “So this day We shall deliver your body (from the sea) that you (Pharaoh) may be a sign to those who come after you!  And verily, many among mankind are heedless of Our Signs.” (Quran 10:92)[3]

“And We turned (the cities of Sodom) upside down and rained down upon them stones of baked clay.  Surely, in this are signs for those who perceive.  And, verily, they were right on the road (from Mecca to Syria, where the Dead Sea is now).  Surely, therein is indeed a sign for the believers.” (Quran 15:74-77) 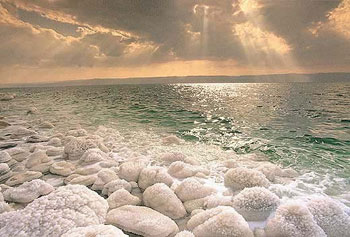 Prophet Lot was harmed by his people as he warned them against their homosexuality and oppression.  Until, finally, God rained missiles of baked clay upon the Sodomites; lifting their land up from underneath them and throwing it upside-down upon them.  The waters of the Dead Sea (above) filled the huge cavity that was left in the wake of the terrible destruction.  Today, only a few ruins (below) remain from the peoples who once thrived in the land.  A land that the sins of the Sodomites made into the lowest point on the face of the earth - in more ways than one! 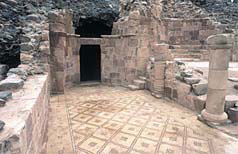 So read the Quran and take lesson from the stories of nations past; those who reached the pinnacle of civilization, amassing great wealth, power and prestige, only to be ungrateful and forget themselves and their Lord.  They became decadent and corrupt, arrogant and haughty, cruel and oppressive, as they turned to falsehoods and false gods.  God sent to them His Prophets, supported with miracles and revelation, to remind them of His Favors and to be dutiful to Him, and to be just and compassionate amongst themselves and creation at large.  But they disbelieved in spite of His Clear Signs.  They rejected their Prophets, mocked, scorned and abused them, even tried to kill them!

Finally, when they left neither hope nor excuse for themselves; when they hastened their own destruction by daring the One God to punish them; He did just that, and the earth was cleansed.  Not only do their relics serve as an admonition for us today, they also prove the divine origin of the Quran itself.  For none but a true Prophet of God, as Muhammad truly was, could have recited such details and with such certainty, except that he was inspired from above.

“For has the story not reached them of those before them?  The people of Noah, ‘Ad and Thamud… and the overthrown cities (of the Sodomites)?  Their Messengers came to them with clear proofs.  It was not God Who wronged them, but they who wronged themselves.” (Quran 9:70)

[3] The above pictures are those of an Egyptian mummy, supposed to be that of the Pharaoh drowned in the Red Sea. For further studies: Mummies of the Pharaohs: Modern Medical Investigations. By Maurice Bucaille. Translated by Alastair D. Pannell and the author. Illustrated. 236 pp. New York: St. Martin's Press.

Previous: The Ones Who Perished (part 1 of 2): The Fate of the People of Noah, Sheba, Iram and Salih