Description: The connections between angels and humankind. 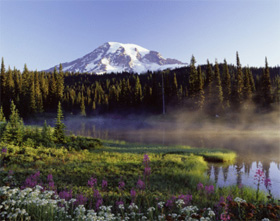 Muslims believe that angels play an active part in the lives of human beings.  This begins soon after conception and continues until the moment of death.  Angels and human beings even interact in the afterlife.  Angels usher people into Paradise and guard the gates of Hell.  Belief in the angels is one of the fundamental beliefs of Islam.

From the traditions of Prophet Muhammad, we understand that a few months after conception life is breathed into it by the permission of God.  An angel then writes the answer to four questions in this human being’s book of deeds.  Will it be male or female?  Will this person be happy or sad?  How long will his or her life span be, and will this person perform good or bad deeds?[1]

There are angels responsible for guarding people throughout their lives.

“For each (person), there are angels in succession, before and behind him.  They guard him by the Command of God.” (Quran 13:11)

Each person has been assigned two recording angels.  These angels have honourable scribes and their duty is to write down all the good and bad deeds.

“Or do they think that We hear not their secrets and their private counsel?  (Yes We do) and Our Messengers (appointed angels in charge of humankind) are by them, to record.” (Quran 43:80)

“(Remember!) that the two receivers (recording angels) receive (each human being after he or she has attained the age of puberty), one sitting on the right and one on the left (to note his or her actions).  Not a word does he (or she) utter, but there is a watcher by him ready (to record it).” (Quran 50:17-18)

“But verily, over you (are appointed angels in charge of humankind) to watch you,Kiraaman (honourable) kaatibeen - writing down (your deeds).” (Quran 82:10-11)

The renowned Islamic scholar Ibn Kathir commented on Quran 13:10-11  by saying, “Each person has angels who take turns in guarding him by night and day, who protect him from evil and from accidents, just as other angels take turns in recording his deeds, good and bad, by night and by day.”

“Two angels, on the right and the left, record his deeds.  The one on the right writes down good deeds and the one on his left writes down evil deeds.  Two other angels guard him and protect him, one from behind, and one from in front.  So there are four angels by day and four others by night.”

Apart from the four angels constantly with each human being, guarding, and recording, other angels continually visit human beings.  In his traditions, Prophet Muhammad reminds his followers that they are constantly being visited by angels.  He said, “Angels come to you in succession by night and day and all of them get together at the time of the Fajr (early morning) and Asr (afternoon) prayers.  Those who have passed the night with you (or stayed with you) ascend (to the Heaven) and God asks them, though He knows everything about you well, “In what state did you leave my slaves?”  The angels reply: “When we left them they were praying and when we reached them, they were praying.”[3]  They gather to witness the prayer and listen to the recited verses of Quran.

It can therefore be understood that angels are very much involved with the life of human beings and this interaction does not end when the angel of death removes the soul, nor does it end after the angels question the deceased person is his grave[4].  Angels are the gatekeepers of Paradise.

“And those who kept their duty to their Lord will be led to Paradise in groups, till, when they reach it, its gates will be opened and its keepers will say: Assalamu alaikum (May God’s peace be upon you!).  You have done well, so enter here, to abide therein.” (Quran 39:73)

“And angels shall enter unto them from every gate (saying), “Assalamu Alaikum (May God’s peace be upon you) for you persevered in patience!  Excellent indeed is the final home!” (Quran 13:23-24)

Angels are also the gatekeepers of Hell.

“And what will make you know exactly what Hell-fire is?  It spares not (any sinner), nor does it leave (anything unburnt)!  Burning the skins!  Over it are nineteen (angels as guardians and keepers of Hell).  And We have set none but angels as guardians of the Fire, and We have fixed their number only as a trial for the disbelievers - in order that the People of the Scripture may arrive at a certainty and the believers may increase in Faith.” (Quran74:27-31)

God created the angels from light.  They are unable to disobey God and follow His orders without flinching or hesitating.  Angels worship God.  It is their sustenance.  These noble creatures play a significant role in the life of human beings.  They guard and protect, record and report, and gather with human beings who remember God.

Previous: Angels (part 2 of 3): God bestowed might and power upon the angels