The Purpose of Life (part 1 of 3): Reason and Revelation

Description: Is “Reason” a sufficient source in the search for the purpose of life? 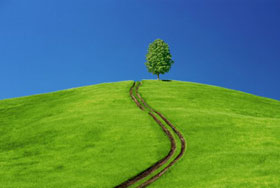 ‘What is the meaning and purpose of life?’  This is, perhaps, the most important question that has ever been asked.  Throughout the ages, philosophers have considered it to be the most fundamental question.  Scientists, historians, philosophers, writers, psychologists and the common man all wrestle with the question at some point in their lives.

Is Reason a Sufficient Guide?

‘Why do we eat?’  ‘Why do we sleep?’  ‘Why do we work?’  The answers we would get to these questions would be similar.  ‘I eat to live.’  ‘I sleep to rest.’  ‘I work to support myself and my family.’  But when it comes to what the purpose of life is, people are confused.  We see their confusion by the type of answers we receive.  Youths may say, "I live for booze and bikinis."  The middle aged professional might say, "I live to save enough for a comfortable retirement."  The old man would probably say, "I’ve been asking why I’m here most of my life.  If there’s a purpose, I don’t care anymore."  And perhaps the most common answer will be, "I really don’t know!"

How, then, do you discover the purpose of life?  We basically have two options.  The first is to let ‘human reason’ - the celebrated achievement of the Enlightenment - guide us.  After all, the Enlightenment gave us modern science based on careful observation of the natural world.  But have post-Enlightenment philosophers figured it out?  Camus described life as "absurd"; Sartre spoke of "anguish, abandonment and despair."  To these Existentialists, life has no meaning.  Darwinians thought the meaning of life was to reproduce.  Will Durant, capturing the predicament of postmodern man, wrote, "Faith and hope disappear; doubt and despair are the order of the day… it is not our homes and our treasuries that are empty, it is our ‘hearts’."  When it comes to meaning of life, even the wisest philosophers are just guessing.  Will Durant, the most noted philosopher of the last century, and Dr. Hugh Moorhead, a philosophy professor at Northeastern Illinois University, both wrote separate books titled ‘The Meaning of Life.’[1]  They wrote to the best-known philosophers, scientists, writers, politicians, and intellectuals of their time in the world, asking them, "What is the meaning of life?"  Then they published their responses.  Some offered their best guesses, some admitted that they just made up a purpose for life, and others were honest enough to say they were clueless.  In fact, a number of famous intellectuals asked the authors to write back and tell them if the purpose of life was discovered!

If the philosopher has no definitive answer, perhaps the answer can be found within the heart and mind that we ourselves possess.  Have you ever looked at the open sky on a clear night?  You will see an incalculable number of stars.  Look through a telescope and you will see gigantic spiral galaxies, beautiful nebula where new stars are being formed, the remnants of ancient supernova explosion created in a star’s final death throes, the magnificent rings of Saturn and the moons of Jupiter.  Is it possible not to be moved by the sight of these countless stars in the night sky shining like diamond dust on a bed of black velvet?  Multitudes of stars beyond stars, stretching back; becoming so dense that they appear to merge into delicate wisps of sparkling mist.  The grandeur humbles us, thrills us, inspires a craving for investigation, and calls for our contemplation.  How did it come into being?  How are we related to it, and what is our place in it?  Can we hear the heavens "speak" to us?

When we read a book, we accept that an author exists.  When we see a house, we accept that a builder exists.  Both of these things were made with a purpose by those who made them.  The design, order, and complexity of the universe as well as the world around us are evidence of the existence of a supreme intelligence, a perfect designer.  All the heavenly bodies are controlled by precise laws of physics.  Can there be laws without a lawmaker?  Rocket scientist Dr. von Braun said: "The natural laws of the universe are so precise that we have no difficulty building a spaceship to fly to the moon and can time the flight with the precision of a fraction of a second.  These laws must have been set by somebody."  Paul Davies, a professor of physics, concludes that man’s existence is not a mere quirk of fate.  He states: "We are truly meant to be here."  And he says regarding the universe: "Through my scientific work, I have come to believe more and more strongly that the physical universe is put together with an ingenuity so astonishing that I cannot accept it merely as a brute fact.  There must, it seems to me, be a deeper level of explanation."  The universe, the earth, and living things on the earth all give silent testimony to an intelligent, powerful Creator. 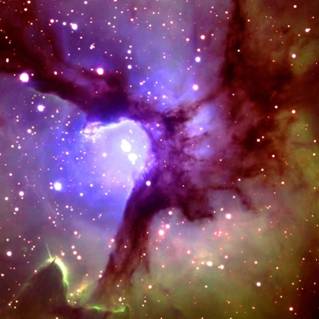 Figure 2 Central region of the Trifid Nebula taken by the Gemini Telescope on Mauna Kea on the Big Island of Hawaii, June 5, 2002.  Located in the constellation of Sagittarius, the beautiful nebula is a much-photographed, dynamic cloud of gas and dust where stars are being born.  One of the massive stars at the nebula’s center was born approximately 100,000 years ago.  The nebula’s distance from the Solar System is generally agreed to be somewhere between 2,200 to 9,000 light years away.

If we were made by a Creator, then surely that Creator must have had a reason, a purpose, in creating us.  Thus, it is important that we seek to know God’s purpose for our existence.  After coming to the realization of this purpose, we can choose whether we want to live in harmony with it.  But is it possible to know what is expected from us left to our own devices without any communication from the Creator?  It is natural that God Himself would inform us of this purpose, especially if we are expected to fulfill it.

Next: The Purpose of Life (part 2 of 3): The Islamic Viewpoint