Description: How and why Muslims pray. 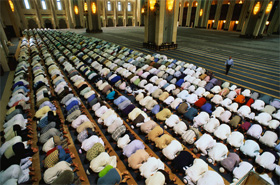 The religion of Islam and the Muslims feature prominently in the media nowadays; unfortunately, they are often depicted as fanatical or extreme for simply following the basic tenants of Islam. The information that is circulated is often incorrect or inadequately explained.  Basic practices and pillars of Islam begin to take on strange connotations when the reality is that they are acts of worship that denote piety and God consciousness.  Muslims testify with certainty that there is none worthy of worship except God alone.  They believe that Muhammad, may the mercy and blessings of God be upon him, is His messenger.  They fast, they give in charity, and they perform  pilgrimage once in a lifetime for those who can afford the journey.  Muslims also pray five times a day.

Five times!  When some hear this, they throw their hands up in horror and wonder about the amount of time this must take and how it can be slotted into one 24 hr period.  Others, who are used to communicating with God in their own form of prayer will often question the rules and regulations that are attached to prayer in Islam.  God, they say, is accessible at any time.  According to Muslim belief that is correct.  God is accessible at anytime and in any place.  Muslims call on God frequently throughout the day and night.  They raise their hands in supplication and ask for His help, mercy, and forgiveness.

This, however, is not the act that Muslims refer to as prayer.  This is called making dua (supplications) and it is similar to Christian prayer in that it is calling on God, asking for His help and  acknowledging His greatness.  For Muslims prayer denotes a set of ritual movements and words said throughout fixed times in a day and night.  God says in Quran, “Verily, the prayer is enjoined on the believers at fixed hours”.  (Quran 4:103)  Muslims pray in the early morning before sunrise, in the middle of the day, in the afternoon, at sunset and at night.  Muslims pray in obedience to God because they believe God created humankind for no other purpose except to worship Him.

Consequently, for a believer, worship is a way of life.  Prayer at fixed times  serves as a reminder of why we are here and helps to direct a person’s thoughts and actions away from sin and onto remembrance of God.  Prophet Muhammad emphasized the importance of prayer when he explained its ability to remove sin.  He said, “What would you think if there was a river by the door of any one of you and he bathed in it five times a day, would there be any trace of dirt left on him?”  They said, “No trace of dirt would be left on him.”  He said, “That is like the five daily prayers, by means of which God erases sin.”[1]

Prayer is just one act amongst many acts of worship however; it holds a very special status in Islam because of the way it was enjoined.  It was not brought down to earth by an Angel rather it was bestowed upon Prophet Muhammad during his unique ascension into the heavens.  Fifty prayers were first enjoined upon the believers but this was eventually reduced to five, while the reward for prayer remains as if it were still fifty.[2]  This reduction shows just how great God’s love for humanity is, a few minutes throughout the day is rewarded as if it were continuous worship.

Muslims pray five times per day.  If possible men should pray in a mosque or in a congregation of men.  Women have the option of praying at home. The believers stand alone, or surrounded by others, they stand in their homes and workplaces, the parks and the mosques.  They stand, bow, prostrate, and sit.  Their voices are sometimes raised and sometimes silent, but the words remain the same.  When a Muslim prays they address God in the Arabic language and use the same words and movements as every other Muslim across the globe.  Muslims unite in the ritual and language of prayer.

For prayer, Muslims stand facing the direction of Mecca in Saudi Arabia, where the Holy House of God, known as the Kaba is situated.  If a person is ill or injured it is possible to pray sitting, or even lying down. The leader of the prayer, known as an imam, is not an intermediary between the people and God; rather, he is usually the person able to memorize the most Quran.  Women may also pray with a congregation of women.  When Muslims pray together they stand shoulder to shoulder. Their proximity to each other demonstrates unity.  No one person is better than another except by his or her piety.

Kings stand next to the poor, white stands next to black, Arabs stand beside Europeans.  The believers then raise their hands to ear level and say ‘Allah Akbar’, which means ‘God is the Greatest’.  This indicates that the prayer has begun and that all matters related to this world are left far behind.  The connection is made and in the few minutes, it takes to pray each person stands before God in full submission.  Interestingly the Arabic word for prayer is Salat and it means to connect.  Next Muslims recite the opening chapter of the Quran and sometimes another chapter from Quran.  They then go through a set of ritual movements bowing and then prostrating, all the while proclaiming God’s greatness, glory and majesty.

In prostration, when the forehead touches the ground, the believer is closer to God than at any other time.  There is now an opportunity to make supplication, asking God for help, mercy or forgiveness (this can be in any language).  Towards the end of the prayer, Muslims sit to praise and ask God to bless Prophets Muhammad and Abraham.  The prayer concludes with the words Assalamu alaikum wa Rahmatullah (May God’s peace and blessings be upon you) spoken while turning the head towards the right and then the words are repeated while turning towards the left.

The prayer has now ended and the world comes rushing back.  However, for those few minutes the believer was alone with God.  Whether he or she was praying alone or within a congregation, the connection was between God and the individual.  It was a moment of bliss, peace, and tranquillity.  Prayer is a reminder and a comfort.  Every hour of every day somewhere in the world, a Muslim is praying.  The believer is seeking the comfort that comes from feeling close to God, the peace that comes from feeling God’s love and mercy and the serenity that comes from knowing that God is real.

[2] Full information about Prophet Muhammad’s night journey and ascension to heaven can be found here.  (http://www.islamreligion.com/articles/1511/)

masha Allah....ive been looking an article like this..., i have a lot of questions that was answered through ur website... im eager to know more about islam...JazakAllah khair....may i gain more understanding about islam...inshaAllah

To be a good and better Muslim and to really please Allah the Almighty, we should offer our prayers on time.

Thank you for the break down on our prayers!

Think you so much for this awesome overview as nowadays, things aren't often explained properly by this way. It helped me a lot !