The Descriptive Titles of Jesus in the Quran (part 1 of 2): “The Messiah” and “a Miracle” 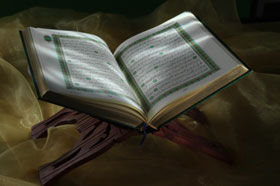 Islam, besides Christianity, is the only major world religion that recognizes Jesus.  A Muslim’s belief is incomplete without Jesus.  Prophet Muhammad said:

In other words, without sound belief in Jesus, one can never earn God’s Paradise.  As with other prophets of God, Muslims add to his name, alai his-salam, which means, ‘Peace be upon him.’[2]  Even though Jesus said, "Peace I leave with you; my peace I give you,"[3]  in the Gospel, Christians rarely use any honorific term but ‘Christ’, and this as part of his name.  Though this may be due to the idea that the Christian does not pray for him, but to him, it shows that Muslims have a great deal of respect for him despite not sharing such a viewpoint.

His Name in the Quran

In Arabic, Jesus is known as Eesa.  In sixteen of the 25 places in the Quran where Eesa is used, he is called "the son of Mary" (Ibn Maryam).  Since he had no father, he was named so after his mother.[4]

The Descriptive Titles of Jesus in the Quran:

Prior to the appearance of Jesus, belief in the coming of the Messiah has been a basic and fundamental part of traditional Judaism.  It is part of Maimonides’ Thirteen Articles of Faith which are considered the minimum requirements of Jewish belief.[5]  In the Shemoneh Esrei prayer[6], recited three times daily, modern Jewry prays for the Messiah who will be their king from the line of David to come and restore the glories of its golden age.  In Hebrew, ‘Messiah’ means the ‘anointed one.’  It is interesting to note that the Old Testament prophecy emphasizes the humanity of the Messiah by referring to him as the "son of man" (Daniel 7: 13)[7]  and not God.

The ideology of the Messiah has a central position in Christian theology.  According to the Bible, Jesus claimed to be the expected Messiah of the Jews (John 4:25-26)[8],  but they rejected him.  Therefore, Christians apply ‘Christ’ - the Greek word for ‘Messiah’ - to Jesus.  In addition, they also maintain the Messiah will be the son of God.

The Quran corrects Jews and Christians in their excesses.  It considers the Jews to be in the right in believing the Messiah to be human, but equates their rejection of Jesus to disbelief,

"And (We cursed them) for their disbelief… and their boastful claim: Indeed, we have killed the [so-called] Messiah, Jesus, the son of Mary, the messenger of God.  And they did not kill him, nor did they crucify him." (Quran 4:156-157)

On the other hand, the Quran agrees with the Christians who identify Jesus to be the Messiah, but considers their insistence that the Messiah is the son of God to be blasphemy:

The truth, according to the Quran, is that:

"The Messiah, son of Mary, was no other than a messenger; messengers before him had indeed passed away." (Quran 5:75)

Furthermore, the Quran states that the Messiah called to the worship of "the true God" like all the prophets before him:

The Quran refers to Jesus as the Messiah (al-Maseeh) at least nine times.[9]  One of the explanations given by Muslim lexicographers is that Jesus was the Messiah because he anointed the eyes of the blind to cure them (Quran 3:43; Mark 6:13; James 5:14), or because he used to lay hands on the sick.

The Quran describes Jesus to be a ‘Sign,’ an aayah in the Quran.  In the terminology of the Quran a miracle is a ‘sign’ of God to display divine might and unrestricted ability to do acts outside the chain of cause and effect.  In this sense, the virgin birth of Jesus is a miracle; a wonderful show of God’s mighty power to do as He pleases.  Therefore, Jesus is a ‘sign’ not only to the Israelites but to the entire world:

In addition, the Quran declares Jesus’ second coming to be a ‘sign,’ an announcement that the Judgment Day is coming close, "And indeed, Jesus will be a sign for the Hour (of Judgment), so have no doubt about it, and follow Me.  This is a straight path." (Quran 43:61)

[2] This is the ‘literal’ meaning.  The most knowledgeable scholars have interpreted it to mean, ‘may God keep him safe from all evil ’.

[5] "12. I firmly believe in the coming of the Messiah; and although He may tarry, I daily hope for His coming." The Jewish Encyclopedia (http://www.jewishencyclopedia.com)>

[6] "Give us understanding, O Eternal, our God, to know Thy ways, and circumcise our hearts to fear Thee; and do Thou pardon us that we may be redeemed. And remove from us bodily pain; and fatten us with the fertility of Thy land; and our dispersed ones from the four corners of the earth do Thou gather together; and they that go astray against the knowledge of Thee shall be judged; and upon the evil-doers do Thou lift up Thy hand: but may the righteous rejoice in the building of Thy city, and in the refounding of Thy Temple, and in the sprouting up of a horn unto David Thy servant, and in the preparing of a light for Jesse's son, Thy Messiah. Before we call Thou wilt answer. Blessed be Thou, O Eternal, who hearest prayer". The Jewish Encyclopedia (http://www.jewishencyclopedia.com).

[7] "I saw in the night visions, and, behold, one like the Son of man came with the clouds of heaven, and came to the Ancient of days, and they brought him near before him."

Next: The Descriptive Titles of Jesus in the Quran (part 2 of 2): A “Word” and “Spirit” from God