Worship in Islam (part 1 of 3): The Meaning of Worship

Description: The meaning and constituents of worship in Islam, along with a discussion of the inner forms of worship. 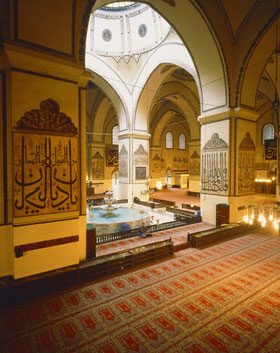 The concept and purpose of worship in Islam is unparallel to any other religion in existence.  It combines the mundane with the spiritual, the individual with the society, and the internal soul with the external body.  Worship has a unique role in Islam, and through worship, a person is regarded as a true Muslim who accords his entire life to the Will of God.

The importance of worship may be seen in the fact that it has been prescribed by God in all religions prior to Islam.  God said in the Quran:

"And assuredly We have sent among every people a messenger (with the command): worship God…" (Quran 16:36)

Worship in Islam has so many facets that it is difficult to describe them all in words.  The most general meaning of worship in Islam is inclusive of everything which is pleasing to God, whether they deal with issues of belief, or deeds of the body.  It may include everything a person perceives, thinks, intends, feels, says and does.  It also refers to everything that God requires, external, internal or interactive.  This includes rituals as well as beliefs, work, social activities, and personal behavior, as human being is a whole, such that every part affects every other.

Worship may be classified into two types:

1)   Specific Beliefs, feelings and visible acts of devotion paid in homage to God which He has commanded.

2)   All other acts of goodness generally encouraged in the life of a Muslim.

This facet of worship entails that one fulfill certain deeds which God has commanded in His religion, whether they deal with the inner self or the outer body, and whether they be obligatory or voluntary.  This facet of worship is not only limited to following His commandments, however, but it is also inclusive of leaving those things which He has forbidden.  Worship in this sense, maybe defined as anything believed, felt, or done as an act of obedience to God.

In this respect, worship may also be called servitude, as it is in essence living one’s life in complete servitude to God, doing what He commands, and avoiding what he forbids, as a slave lives within the will of his master.  In essence all creations are slaves of God, whether they like it or not, for they are all subject to the laws He has placed within His creation:

"There is none in the heavens and the earth but comes unto the Most Beneficent (God) as an obedient slave." (Quran 19:93)

"To Him submitted all creatures in the heavens and the earth, willingly or unwillingly." (Quran 3:83)

But worship differs from servitude in that it must be coupled with love, awe and reverence.  No act of obedience is regarded as worship unless it is coupled these feelings; one must love the action and love, hold in awe and have reverence for the One the action is being performed.

For this reason, in discussing this topic, it must be emphasized that worship is a right with is solely for God.  Islam adheres to the strictest form of monotheism and does not tolerate that any act of worship be directed towards other than God.  It is God alone who demands our obedience, and it is God alone who deserves our love.  Any veneration of other deities besides God, whether they be demigods, prophets, angels, saints or martyrs, or their relics, statues or pictures, is considered as a breach in this monotheism, and a person is rendered out of the fold of Islam if committed.  Even though one may justify that they venerate saints due to their service to God, or their relics as a remembrance of them, Islam does not differentiate between direct and indirect, or subordinate and superior worship.  All worship and acts of veneration, homage and obedience must be offered for God alone.

The Inner Forms of Worship

As mentioned earlier, acts of worship prescribed by God either deal with the inner self or the outer body.  Those which deal with the inner self do so with belief and feelings.  Humans are commanded to believe in certain ultimate truths, discussed in the articles of faith, and this is the most important aspect of worship.  Belief is the basis for what a person feels and does – actions and feelings are a reflection of belief.  If a person’s belief in incorrect or weak, it will never produce the desired results in regards to their feelings or actions.  For example, if a person incorrectly believes that God has forgiven them their sins due to their mere faith, their belief will not produce the desired feeling of fear which should be present in their heart, nor will this belief cause a person to cease sinning and perform deeds of righteousness.

God has also commanded us to maintain certain feelings in our hearts, both towards God as well as others of His creation.  Muslims must love God, fear him, have awe in Him, place their trust in Him, and revere Him.  Muslims have also been commanded to love their fellow Muslims, to have mercy and compassion towards them, to love righteousness and to hate sin.  These are all considered acts of worship of the inner self because they are in essence a fulfillment of the commandments of God; Muslims will be rewarded for fulfilling them.

Next: Worship in Islam (part 2 of 3): The Outer Forms of Worship