Uthman Ibn Affan (part 2 of 2): The Possessor of Two Lights

Description: The thought provoking life and works of the third Muslim leader. 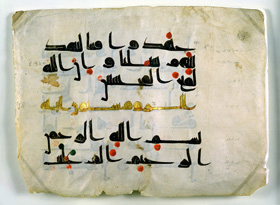 Uthman ibn Affan[1]  was a man so loved by Prophet Muhammad, may the mercy and blessings of God be upon him, that he was called the possessor of two lights.  Uthman was married to Prophet Muhammad’s daughter Ruqiayah and when she died, he married Muhammad’s other daughter, Umm Kulthum, thus possessing the two lights.

Uthman ibn Affan was appointed Caliph (leader of the Muslim nation) through a process of consultation and careful deliberation.  On his deathbed, Omar ibn Al Khattab appointed a council of six men to choose a new leader.  It was a time of confusion and chaos for the Muslims, small disagreements were becoming obstacles.  Some people wanted to appoint Ali ibn Abu Talib because he was from Prophet Muhammad’s family, others wanted to appoint Uthman because he was from one of the great tribes of Mecca.  Ibn Kathir, the respected Islamic scholar of the 14th century suggests that the leader of the council, Abdu Rahman ibn Awf questioned both men and then chose Uthman.

Abdurrahman asked Ali, “Do you swear to rule by the glorious book of God (Quran) and the Sunnah (traditions) of His messenger?”  To which he replied, “I hope to act according to my best knowledge and capacity”.  When Abdurrahman asked Uthman the same question, he replied simply, “I do”.  It would be too simplistic to suggest that the decision was made solely by the answer to this question but rather it was part of a process of reflection and deliberation.  Both men were amongst several who were eminently qualified to lead the Muslim nation.  Uthman was a man known to be pious, generous, and modest, perhaps his simple answer reflected his personality.  A shy man, who spoke few words but whose heart was filled with love for God and His messenger.

Immediately after being elected, Uthman ibn Affan addressed the people from the minbar previously used by Prophet Muhammad.  He looked at the Muslims and praised God, sent blessings upon Prophet Muhammad, and reminded the people that this world was full of deception.  He advised the people to shun living luxurious lives and to seek a place in the hereafter, full of happiness and peace.

“And put forward to them the example of the life of this world, it is like water (rain) which We send down from the sky, and the vegetation of the earth mingles with it, and becomes fresh and green.  But (later) it becomes dry and broken pieces, which the winds scatter.  And God is Able to do everything.  Wealth and children are the adornment of the life of this world.  But the good righteous deeds (five compulsory prayers, deeds of God’s obedience, good and nice talk, remembrance of God with glorification, praises and thanks, etc.), that last, are better with your Lord for rewards and better in respect of hope.”  (Quran 18: 45 - 46)

Uthman was a pious man who loved and trusted God completely, thus his first action as leader was to assure the people that he would guide them according to the way of the Prophet and Caliphs Abu Bakr and Omar ibn Al Khattab.  Uthman was turning 70 when he became leader of the Muslims and for many years, he had refrained from the pleasures of this life in order to seek nearness to God.  After setting a tone of piety and concern for Muslims that would be the hallmark of his reign, Uthman turned his attention to giving direction to the governors and the Muslim armies.

To the governors Uthman expressed his desire for them to serve the people, and never to exploit them.  He sent prominent companions of Prophet Muhammad, as his personal deputies to the provinces to scrutinize the conduct of officials and the condition of the people.  Uthman reminded the armies to follow the clear guidelines set down by Omar ibn Al Khattab and asked them never to forget that they were defending the believers.  Extensive conquests were made during the reign of Uthman, including parts of Spain, Morocco, and Afghanistan.  Uthman was also the first Caliph to organise a navy.  He reorganised the administrative divisions of the Muslim Caliphate, expanded, and initiated many public projects.  Perhaps Uthman’s most astounding contribution to the Muslims was his compilation of the Quran.

After the death of Prophet Muhammad and during the time of the Caliphs, hundreds of thousands of non-Arabs converted to Islam.  Consequently, the Quran began to be recited and written in various different dialects and scripts.  One of Prophet Mohammad’s companions, and Uthman’s friend Hudhaifah, whilst on a journey noticed that there were many different recitations of Quran throughout the Muslim Empire.  Hudhaifah suggested to Uthman that there be an official version   written in the style used in Medina.

Uthman knew the Quran by heart and had intimate knowledge of the context and circumstances relating to each verse.  The Quran had been gathered during the time of Abu Bakr and was in the safekeeping of Prophet Muhammad’s wife Hafsah.  Uthman took possession of the originals and ordered some of the most trusted companions to make careful copies.  He then ordered all other unofficial copies to be burned or otherwise destroyed.  Five official copies were sent to the greatest cities of the Muslim Caliphate.  Original copies exist to this day in Tashkent, Uzbekistan and the Topkapi Palace in Istanbul, Turkey.

The final six years of Uthman’s reign were marked by rebellion. Some of the governors that had been appointed during the reign of Uthman were heavy handed and to some extent unjust. In this way, the seeds of dissension spread and many of the people began to love the luxuries of life that Uthman had warned against.  Conspiracies arose and it was difficult for Uthman to discern friend from foe.  He was reluctant to shed the blood of any Muslim however rebellious they may be.  Uthman preferred to persuade with kindness and generosity for he always remembered the words of Prophet Muhammad.  “Once the sword is unsheathed among my followers, it will not be sheathed until the Last Day.”

The rebels called for Uthman to step down and indeed many of the companions advised him to do so.  Uthman, now an old man of more than 80 years, heard the words of his beloved prophet ringing in his ears and refused to stand down from his position.  “Perhaps God will clothe you with a shirt, Uthman and if the people want you to take it off, do not take it off for them.”  Uthman remained true to his covenant but after a long siege, the rebels broke into his house and murdered him.  As the assassin’s sword struck, Uthman was reciting the following verse.

Such was the tragic end of one of the most pious, kind and selfless men in Islam.

[1] Based on the work of Imam Ibn Kathir. The Rightly Guided Caliphs.

I like the article.and I learned a lot about othman bin Affan (may peach be upon him )from this article. That's great.