Description: How the third successor of the prophet Muhammad embraced Islam. 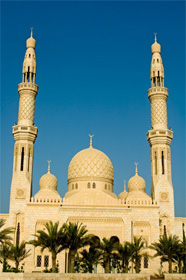 Uthman ibn Affan was the third of Prophet Muhammad’s successors.  He was known as the leader of the faithful and ruled for approximately 12 years.  The first six years were times of relative tranquillity and peace, however the last years of his reign were marred by internal conflict, and pockets of rebels trying to cause havoc throughout the Caliphate. Uthman is remembered as a pious, gentle, and kind man, known for his modesty and shyness, and admired for his generosity.  He ruled with impartial justice and mild and humane policies, based on his obedience to God and his love for Prophet Muhammad and the Muslim nation.

Uthman, may God be pleased with him, was born seven years after Prophet Muhammad, may the mercy and blessings of God be upon him, and belonged to the Umayyad branch of the Quraish tribe.  The Umayyads were the most influential clan of the Quraish, they were the strongest and wealthiest, and Uthman was their “golden child”, the most beloved, due to his good manners and shyness.  Like his predecessor Omar ibn Al Khattab, Uthman was able to read and write.  This was an unusual skill in pre Islamic Arabia and Uthman became a successful trader and cloth merchant.  Throughout his life he was known as a kind, generous man and even before his conversion to Islam he would freely give money to help those in need.

It was his close friend Abu Bakr who introduced Uthman to Islam and he embraced the new religion at the age of thirty-four.  This was during the very early days of Islam when the men of Mecca were systematically abusing and torturing any converts to Islam.  In spite of the abuse, Uthman would not give up his Islam and in time Uthman was married to Prophet Muhammad’s daughter, Ruqiayah, thus strengthening his relationship to the Prophet.

The abuse and torture continued and Uthman’s wealthy family and status in society as a merchant did not protect him.  He was abused and tortured even by members of his own family; his uncle shackled his hands and feet and shut him in a dark enclosed room.  The continual bad treatment by his close family led Uthman and his wife to participate in the first migration to Abyssinia.  Prophet Muhammad praised his forbearing character and said “After Lot, Uthman is the first man who, with his wife, has given up the comfort of his home for the sake of God”.  After some time Uthman and Ruqiayah returned to Mecca to be with the struggling Muslims and their beloved father and Prophet.

Uthman formed a very close relationship with Prophet Muhammad, and he gained intricate knowledge about the religion of Islam.  He narrated 146 traditions directly from the Prophet himself and was one of very few people who were able to write down Quran.  Uthman also became a reference point for those trying to learn the rituals of worship.  He understood and was able to instruct others in the rituals of ablution, prayer, and other Islamic obligations.  Uthman also participated in the migration to Medina and here he assisted Prophet Muhammad in establishing the Muslim nation.  Prophet Muhammad even referred to him as his assistant.

In Medina, water was scarce and control of the wells was tightly held by several men.  Because he was a skilful trader and negotiator, Uthman set about trying to procure a well for the use of the Muslims.  He negotiated a price for half a well; he would have control one day and the other owner the next day.  However, Uthman gave his water to the Muslims freely, so nobody wanted to pay for the water on the alternate days.  The original owner of the well had no choice but to sell his half of the well to Uthman who nevertheless paid a fair price for it.  Uthman continued to allow the water to be used freely by all and never reminded the people of his charity.  He was humble and modest.

Uthman gave freely from his wealth to please God and His messenger Muhammad.  Historical Islamic stories mention that every Friday Uthman would buy slaves for the purpose of setting them free and that although he was wealthy he was often without servants because of this habit.  When Prophet Muhammad and the Muslim armies were going to fight the Byzantines at Tabuk, he called on the wealthier people to give from their wealth and property to support and equip the soldiers.  Uthman presented 200 saddled camels and 200 ounces of gold.  He also gave 1,000 dinars.  Prophet Muhammad kept asking for donations hoping to inspire others to give as freely as Uthman.  However, it was Uthman who surpassed them all and gave a total of 900 equipped camels.[1]

The portrait we are able to build of Uthman is that of a generous, unassuming, and kind man.  He was known for his humbleness, modesty, and piety.  Uthman would often spend the nights in prayer and he was known to fast often, sometimes on alternative days.  In spite of his wealth, he lived simply and would often sleep, wrapped in a blanket, on the sand of the mosque.  Uthman was appointed as the third leader of the Muslims after Prophet Muhammad by a council of six men.  He continued the humane and just rule of Prophet Muhammad, Abu Bakr, and Omar.  He cared for the Muslims and expanded the Muslim Caliphate into Morocco, Afghanistan, and Azerbaijan.  For six years, his reign was one of peace and calmness, but the winds of change were blowing over the empire.

Uthman ibn Affan,  like his predecessors was a man of the people.  He was modest, shy, and humble but still his later reign was marred by infighting and rebellion.  God had chosen Uthman to be the third leader but the people of dissension plotted to remove him from this noble position.  Prophet Muhammad had prophesized that Uthman would be placed in a very difficult situation when he said, “Perhaps God will clothe you with a shirt, Uthman, and if the people want you to take it off, do not take it off for them.”  Uthman did not remove his shirt, his love for God and his Messenger kept him both strong and humble in the face of old age and extreme difficulties.

Next: Uthman Ibn Affan (part 2 of 2): The Possessor of Two Lights

Mashaallah it helped me soooo much

MASHALAH very nice may blessed you

I love is Islam, Islam is peace and solutions to all life issues...