Omar, The Criterion (part 3 of 3): The Commander of the Faithful

Description: Omar was a model of justice, generosity, and piety. 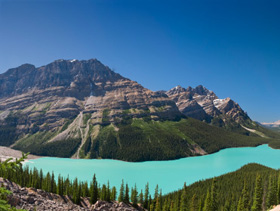 Omar Ibn Al Khattab was the second Caliph of the Muslim Ummah (Nation), and the first Muslim leader to be called the Commander of the Faithful.  After Prophet Muhammad’s death, his closest friend Abu Bakr became his successor and led the Muslims for around two years.  When Abu Bakr felt his own death approaching, he gathered his closest friends and advisors around him and informed them that their allegiance to him was over.  Abu Bakr hoped that these men would choose his successor from among themselves.  However, after much discussion Abu Bakr’s companions returned to him and asked him to choose for them for they trusted his choice beyond question.  Abu Bakr chose Omar.

Some of the men around Abu Bakr voiced their concern that Omar, known to be a very harsh and tough man would be too hard on the people.  Abu Bakr responded by saying that he considered Omar to be the best among them. Despite these initial reservations among some men of Medina, Omar was appointed as the second Caliph of the Muslims.  He began his reign by addressing the people and immediately explaining his expectations for himself.  Omar knew the people were wary of his reputation for toughness and he addressed this issue.

He said, “Oh people, know that I have been appointed to govern your affairs, so recognise that my roughness is now weakened, but I will continue to be rough and harsh on the people of oppression and transgression and will put their cheeks into the dirt[1].  Know also that I will put my own cheek into the dirt to defend the people of piety.”

The young Muslim nation that Prophet Muhammad, may the mercy and blessings of God be upon him, and his companions had worked so hard to establish was an Ummah unlike no other.  Benefits were paid to every member of the Ummah from the Muslim treasury; it was not necessary to be a government employee, the wealth of the ever-expanding nation was shared equally.  Omar did not institute this, he was merely following the already established way of his predecessors, but he did promise to increase the payments.

Omar also promised not to send the Muslim armies “into destruction”, meaning that he would not send the armies out unless the risks were evaluated and deemed acceptable. He promised not to keep the soldiers away from their families for an extended period and reassured the men that while they were away fighting for the Muslim Ummah, and if they did not return, he, the Caliph would be the father of their children and the caretaker of their wives. Omar believed the role of the leader was to protect the people.

This concept seems very unusual now days when we see Presidents and Prime Ministers surrounded by bodyguards and willing to trample over anyone to protect themselves and their power.  Omar Ibn al Khattab, although he was the leader of an Empire, never felt it necessary to have a bodyguard.  He walked the streets of Medina like any ordinary citizen, even at night.  In fact, it was during the nights that he roamed the streets checking up on those under his protection and anonymously distributing charity.

One of the years of Omar’s reign came to be known as the Year of Ashes. This year was a great test for the Muslim Ummah. It was a time of drought and famine, when the wind was so hot it burnt the skin as if with hot ashes. Meat, butter, and milk became unavailable, and the people existed on little more then dry bread sometimes dipped in oil. Omar took an oath that he would not eat or drink anything that was not available to the people. Even when foodstuffs became available in the markets again, Omar refused to buy them for inflated prices. He was heard to say, “How can I be concerned about and understand my own subjects if I am not going through the same trials that they go through?”

More then fourteen hundred years after his reign Omar, is still remembered as a man of justice.  Drawing on the principles of justice, mercy and compassion inherent in Islam, Omar treated all those under his care equally, whether they were rich or poor, black or white, powerful or weak.  He constantly feared that God would question him about his actions. He worried that there may be sick or poor people among the believers that he had not cared for correctly.  Omar ibn Al Khattab never appointed judges or governors who expressed a desire for such a job but chose wisely from the most pious members of the Ummah.

Omar considered himself an ordinary Muslim but history has recorded that he was anything but ordinary. Omar was strong, physically and spiritually, he was generous, noble and lived a life of humility. Omar followed in the footsteps of his beloved Prophet Muhammad, may the mercy and blessings of God be upon him, he followed his example and upheld his traditions. Omar’s whole being was focused on pleasing God; he feared God’s punishment but hoped for Paradise. Omar was able to distinguish between the truth and falsehood, he felt pain when the Ummah or any member of it was hurting, and he felt joy when those under his care were content and happy worshipping their Lord.  Omar was one of four rightly guided Caliphs.  Even today, he continues to be a role model for strength, justice, love, and mercy.

[1] This was an expression used by the Arabs of that time, to denote a harsh response, one that leaves no doubt that oppression of others and the transgression of their rights will not be tolerated.

Wow! What a great man. I love the sahaba