The Quran on the Origin of the Universe

Description: A Scientific and Quranic explanation about the creation of the universe. 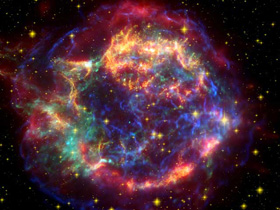 The science of modern cosmology, observational and theoretical, clearly indicates that, at one point in time, the whole universe was nothing but a cloud of ‘smoke’ (i.e. an opaque highly dense and hot gaseous composition).[1]  This is one of the undisputed principles of standard modern cosmology.  Scientists now can observe new stars forming out of the remnants of that ‘smoke’ (see figures 1 and 2).

Figure 1: A new star forming out of a cloud of gas and dust (nebula), which is one of the remnants of the ‘smoke’ that was the origin of the whole universe. (The Space Atlas, Heather and Henbest, p. 50.) 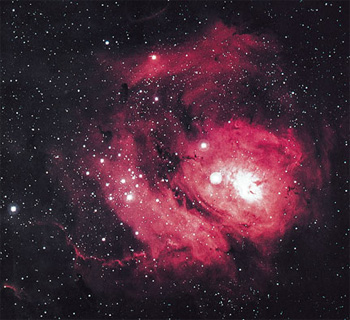 Figure 2: The Lagoon nebula is a cloud of gas and dust, about 60 light years in diameter.  It is excited by the ultraviolet radiation of the hot stars that have recently formed within its bulk. (Horizons, Exploring the Universe, Seeds, plate 9, from Association of Universities for Research in Astronomy, Inc.)

The illuminating stars we see at night were, just as was the whole universe, in that ‘smoke’ material.  God has said in the Quran:

“Have not those who disbelieved known that the heavens and the earth were one connected entity, then We separated them?...” (Quran 21:30)

Dr. Alfred Kroner is one of the world’s renowned geologists.  He is Professor of Geology and the Chairman of the Department of Geology at the Institute of Geosciences, Johannes Gutenberg University, Mainz, Germany.  He said: “Thinking where Muhammad came from . . . I think it is almost impossible that he could have known about things like the common origin of the universe, because scientists have only found out within the last few years, with very complicated and advanced technological methods, that this is the case.”[2]  (To view the RealPlayer video of this comment click here).  Also he said: “Somebody who did not know something about nuclear physics fourteen hundred years ago could not, I think, be in a position to find out from his own mind, for instance, that the earth and the heavens had the same origin.”[3] (View the RealPlayer video of this comment).

[2] The reference for this saying is This is the Truth (videotape).  For a copy of this videotape, please visit this page.

assalamualaikum to all muslim brothers and sister islam is really improving in the world especially in europe ,allahu waid.

We learn and understand Islam more and more with the development of modern science. This makes us proud to be moslims , the follower of true religion sent by ALMIGHTY through our beloved prophet, Mohammed ( peace be upon him). We should stick to basic tenets of Islam , the true religion, and demonstrate to the world by practice what Islam stands for. The whole world follow the 'TRUE PATH'.INSHA'ALLAH . F. R. M. A.

first i am muslim person and i believe that the universe was created in 6 by Allah as Allah told us in the holly quran if we are muslim Allah told us every that made our life very different from those who this religion the best religion in the world.

The general idea that people 1400 years ago could not know the details that science now tells us is short sighted. I have no problem thinking God has revealed as much or more than we now have in the world. Civilazation has it's ups and downs in knowledge and the 'dark ages' probably cost more in loss of knowledge than any thing else. Can anyone explain why so much knowledge has been 'found' since the early 1800? Has there not been another time of similar discovery? If a disaster took out 90% of our population at once how much of our technology would survive? Sherwin

it impressed me so much.holly quran is a true massage of God.

assalamo alaikum-I recently converted to Islam. I am a single bi-racial(white,african-american and indian) mother of four children. I made this decision over a 1.5 year study to conclude that without a doubt if I was on my death bed today I would tell my children and my family that the Quran is the Truth. I would tell them that no matter what people may say they are either uneducated or misguided just as I definalty was before MY OWN search. I now see a real seriousness in the huge misconceptions people easily may have reguarding Islam based on no real educational or theological study. I have a real passion to help others understand why I chose Islam including my own family. It was actually the scientific DATA and PROOF that flat out made me realize that after knowing this information I would never be able to turn my back on the MESSAGE that was sent through the Prophet Muhammad p.b.u.h. I thank God for answering my prayers when I continually asked him to guide me to see the Truth throughout my study for the sake of my children. Insha Allah I will be able to help others as well

ALHAMDULILLAH ths universe created by the Allah (Swt) Some may say everything by chance. Actully i think they have less mingle with scientific facts

The earth and heaven were not one connected entity. The earth formed billions of years after the big bang.

Alhamdulillah, am able to read and understand the miracles in the Qur'an.