Omar, The Criterion (part 1 of 3): “Strengthen Islam with Omar”

Description: How the second successor of the Prophet Muhammad embraced Islam. 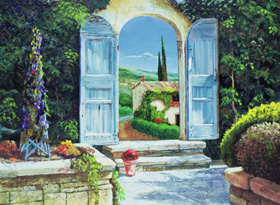 When the enemies of Islam heard the name of Omar, their knees would tremble.  When Satan saw Omar walking down the street, he would turn the other way.  Even Omar’s friends would sometimes find his presence intimidating, and they too feared his anger.  However, this man of strength and power, cried easily, and had a soft and compassionate heart.  Omar was humble without being weak.  Omar combined two opposing character traits and that made him unique amongst the men around Prophet Muhammad.  Omar’s path to the truth began with a vehement hatred of Muhammad and the religion of Islam but that hatred soon turned into a fierce love.  Omar ibn Al Khattab strengthened Islam.

Omar belonged to a middle class family, neither rich nor poor, of the Adi clan, part of the tribe of Quraish.  He had a tough upbringing, his father was known to be a harsh man who worked his son to exhaustion and beat him when he considered it necessary.  Despite this Omar is believed to have been literate, which was an uncommon skill in pre Islamic Arabia.  Born approximately 11 years after Prophet Muhammad, Omar was a relatively fair-skinned boy who grew into a tall, well-built, muscular man known for his fierce demeanour and wrestling skills.

Omar began his working life as a shepherd for his father and aunts, and he was paid a very small stipend, often only a handful of dates for a full days work.  He supplemented his income by engaging in wrestling competitions but as he grew into manhood, he became a successful trader and respected businessman.  Omar was known as a man of strength.  His posture and bearing denoted strength and his voice was loud and commanding.  When Mohammad’s teachings became a problem for the men of Mecca, Omar pronounced his hatred for Islam openly and took part in the abuse and torture of many of the weaker converts to Islam.

Although not known by his given name of Omar, there was another strong, determined man opposed to Islam.  This was the man originally known as Abu Hakim, (the father of wisdom), but history remembers him as Abu Jahl, (the father of ignorance), the avowed enemy of Islam.  Prophet Muhammad, may the mercy and blessings of God be upon him, gave him the name Abu Jahl to denote his total ignorance in not recognising the truth of Islam.  Traditional accounts reveal that Prophet Muhammad on one occasion raised his hands in supplication and begged God to strengthen Islam by whomever of the two Omar’s he loved most.  To the enemies of Islam and to the companions of Prophet Muhammad Omar ibn al Khattab embracing Islam was an unthinkable notion.

Omar’s hatred of Islam was so strong that he volunteered to kill Prophet Muhammad.  Without a second’s hesitation, he strode down the streets of Mecca intent on drawing his sword and ending the life of the Prophet of God.  One of the men of Mecca,  who was secretly a Muslim saw the look on Omar’s face and immediately knew that his beloved Prophet was in danger.  Without fear for himself, he approached Omar and asked him where he was going so quickly.  Omar replied that he was going, “to the man who has disunited our people, cursed our gods and made fools of us”, and he said, “I am going to kill him”.

The young Muslim man named Nu’aim felt terror rush into his heart and tried to engage Omar in a discussion to divert him, but Omar was intent on his mission and continued to stride along the street.  Nu’aim reluctantly spoke the words that lead Omar to Islam.  He said, “why don’t you take care of your own house first’.  Omar stopped short and asked him what he meant by those words.  Omar’s beloved sister and her husband had secretly embraced Islam and Nu’aim revealed their secret in order to save the life of Prophet Muhammad.

Omar turned around immediately and walked with determination towards his sister’s house.  As he approached, he could hear the sound of Quran being recited.  Omar knocked on the door.  Inside the inhabitants scrambled to hide their copies of Quran but Omar entered and demanded to know what the “humming” sound he had heard was.  Omar’s sister replied that it was nothing, just the sound of them talking, but Omar knew the sound of Quran and asked menacingly, “Have you become Muslim?”  Omar’s brother in law answered in the affirmative, whereupon Omar fell upon him, wrestling him to the ground.  Omar’s sister tried to defend her husband and in the scuffle, Omar hit her face, drawing blood.

Omar’s sister seemed to have the strength her brother was so famous for, she stood up and faced her angry brother saying, “You enemy of God!  You would hit me just because I believe in God.  Whether you like it or not, I testify that there is no god but Allah and that Muhammad is His slave and messenger.  Do whatever you will!”  Omar saw the blood running down his sister’s face, her words echoed in his ears, and he stood up.  Omar demanded that the words of Quran he had heard as he approached the house be recited for him.

“We have not sent down the Quran unto you (O Muhammad) to cause you distress, but only as a reminder to those who fear (God). A revelation from Him who has created the earth and high heavens.  The Most Beneficent rose over the (Mighty) Throne (in a manner that suits His Majesty). To Him belongs all that is in the heavens and all that is on the earth, and all that is between them, and all that is under the soil.  And if you (O Muhammad) speak aloud, then verily, He knows the secret and that which is yet more hidden.  No one has the right to be worshipped but He!  To Him belong the Best Names.” (Quran 20:2-8)

Omar’s eyes filled with hot tears.  “Is this what we were against”, he asked.  “The One who has spoken these words needs to be worshipped.” Omar left his sister’s house and rushed to Muhammad.  Those with Prophet Muhammad were afraid, but they admitted Omar and restrained him until he was in Muhammad’s presence.  Prophet Muhammad grabbed him and said, “Why did you come here, son of Khattab?”

Omar faced Prophet Muhammad with humility and joy and said, “O Messenger of God, I have come for no reason except to say I believe in God and his Messenger.”  Prophet Muhammad was overcome with joy and cried out that God was Great!  Within days, Omar lead a procession of Muslims to the house of God where they prayed openly.  It was on this occasion that Prophet Muhammad gave him the nickname Al Farooq – the criterion[1].  It denotes one who is able to distinguish truth from falsehood.  Islam was strengthened with Omar, his fierce hatred melted into a love that knew no bounds.  His life and his death were now for the sake of God and his Messenger.

[1] Taken from the historical works of At Tabari, & The Life and times of Omar Ibn Al Khattab by Sheikh Ali Muhammad Salladi.