The Tolerance of the Prophet towards Other Religions (part 1 of 2): To Each Their Own Religion

Description: Many mistakenly believe that Islam does not tolerate the existence of other religions present in the world.  This article discusses some of the foundations the Prophet Muhammad himself laid in dealing with people of other faiths, with practical examples from his lifetime.  Part 1: Examples of religious tolerance for people of other faiths found in the constitution which the Prophet laid in Medina. 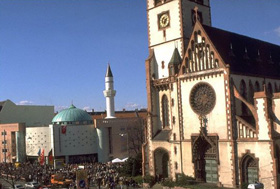 The dealings of the Prophet, may the mercy and blessings of God be upon him, with other religions can best be described in the verse of the Quran:

“To you be your religion, to me be mine.”

The Arabian Peninsula during the time of the Prophet was a region in which various faiths were present.  There were Christians, Jews, Zoroastrians, polytheists, and others not affiliated with any religion.  When one looks into the life of the Prophet, one may draw on many examples to portray the high level of tolerance shown to people of other faiths.

In order to understand and judge this tolerance, one must look into the period in which Islam was a formal state, with the specific laws laid down by the Prophet in accordance with the tenets of religion.  Even though one can observe many examples of tolerance shown by the Prophet in the thirteen years of his stay in Mecca, one may incorrectly think that it was only due to seeking to raise the profile of  the Muslims and the social status of Islam and in general.  For this reason, the discussion will be limited to the period which commenced with the migration of the Prophet to Medina, and specifically once the constitution was set.

The best example of the tolerance shown by the Prophet to other religions may be the constitution itself, called the ‘Saheefah’ by early historians.[1]  When the Prophet migrated to Medina, his role as a mere religious leader ended; he was now the political leader of a state, governed by the precepts of Islam, which demanded that clear laws of governance be laid out to ensure harmony and stability in a society which once had been distraught by decades of war, one which must ensure the peaceful coexistence of Muslims, Jews, Christians and polytheists.  Due to this, the Prophet laid down a ‘constitution’ which detailed the responsibilities of all parties which resided in Medina, their obligations towards each other, and certain restrictions which were placed on each.  All parties were to obey what was mentioned therein, and any breach of its articles was regarded as an act of treachery.

The first article of the constitution was that all the inhabitants of Medina, the Muslims as well as those who had entered the pact from the Jews, Christian, and idolaters, were “one nation to the exclusion of all others.”  All were considered members and citizens of Medina society regardless of religion, race, or ancestry.  People of other faiths were protected from harm as much as the Muslims, as is stated in another article, “To the Jews who follow us belong help and equity.  He shall not be harmed nor his enemies be aided.”  Previously, each tribe had their alliances and enemies within and without Medina.  The Prophet gathered these different tribes under one system of governance which upheld pacts of alliances previously in existence between those individual tribes.  All tribes had to act as a whole with disregard to individual alliances.  Any attack on other religion or tribe was considered an attack on the state and upon the Muslims as well.

The lives of the practitioners of other religions in the Muslim society was also given protective status.  The Prophet said:

“Whoever kills a person who has a truce with the Muslims will never smell the fragrance of Paradise.” (Saheeh Muslim)

Since the upper hand was with the Muslims, the Prophet strictly warned against any maltreatment of people of other faiths.  He said:

“Beware!  Whoever is cruel and hard on a non-Muslim minority, or curtails their rights, or burdens them with more than they can bear, or takes anything from them against their free will; I (Prophet Muhammad) will complain against the person on the Day of Judgment.” (Abu Dawud)

To Each Their Own Religion

In another article, it states, “the Jews have their religion and the Muslims have theirs.”  In this, it is clear that anything other than tolerance would not be tolerated, and that, although all were members of a society, each had their separate religion which could not be violated.  Each was allowed to practice their beliefs freely without any hindrances, and no acts of provocation would be tolerated.

There are many other articles of this constitution which may be discussed, but emphasis will be placed on an article which states, “If any dispute or controversy likely to cause trouble should arise, it must be referred to God and His Messenger.”  This clause maintained that all inhabitants of the state must recognize a higher level of authority, and in those matters which involved various tribes and religions, justice could not be meted out by individual leaders; rather it must be adjudicated by the leader of the state himself or his designated representatives.  It was allowed, however, for individual tribes who were not Muslims, to refer to their own religious scriptures and their learned men in regards to their own personal affairs.  They could though, if they opted, ask the Prophet to judge between them in their matters.  God says in the Quran:

Here we see that the Prophet allowed each religion to judge in their own matters according to their own scriptures, as long as it did not stand in opposition to articles of the constitution, a pact which took into account the greater benefit of the peaceful co-existence of the society.

Next: The Tolerance of the Prophet towards Other Religions (part 2 of 2): Religious Autonomy and Politics

This article gives clear evidence that Al-Islam is very tolerant towards the Christians, Jews and other people of the book. It also informs us, as Muslims, as to how we are to behave towards our non-Muslim relatives, neighbors and co-workers.

Alhamdulillah barakallahu fikum, with the story, and the tolerance of the prophet Muhammad s a w....