Description: The forgiveness of the Prophet towards non-Muslims, even those who sought to kill him and opposed his mission throughout his life.  Part 1. 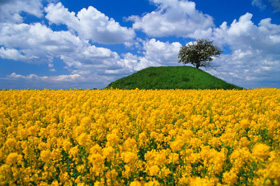 The Prophet Muhammad, may the mercy and blessings of God be upon him, was described as a “Mercy for all the Worlds”, as God said in the Quran:

The recipients of this quality were not limited to just the Muslim nation, but it also extended to non-Muslims, some of who spent all their effort trying to harm the Prophet and his mission.  This mercy and forgiveness is clearly demonstrated in the fact that the Prophet, may the mercy and blessings of God be upon him, never took revenge on anyone for personal reasons and always forgave even his staunch enemies.  Aisha said that the Prophet never took revenge on his own behalf on anyone.  She also said that he never returned evil for evil, but he would forgive and pardon.  This will, God willing, become clear after a deep analysis of the following accounts of his life.

In the earlier portion of his mission, the Prophet traveled to the city of Taif, a city located in the mountains nearby to Mecca, in order to invite them to accept Islam.  The leaders of Taif, however, were rude and discourteous in their treatment of the Prophet.  Not being content with their insolent attitude towards him, they even stirred up some gangs of the town to harass him.  This riff-raff followed the Prophet shouting at and abusing him, and throwing stones at him, until he was compelled to take refuge in an orchard.  Thus the Prophet had to endure even more obstacles in Taif than he had had to face in Mecca.  These ruffians, stationed either side of the path, threw stones at him until his feet were injured and smeared with blood.  These oppressions so grievously dejected the Prophet and plunged him into in such a state of depression that a prayer, citing his helplessness and pitiable condition and seeking the aid of God, spontaneously came from his lips:

“O God, to You I complain of my weakness, lack of resources and humiliation before these people.  You are the Most Merciful, the Lord of the weak and my Master.  To whom will You consign me?  To one estranged, bearing ill will, or an enemy given power over me?  If You do not assign me any worth, I care not, for Your favor is abundant upon me.  I seek refuge in the light of Your countenance by which all darkness is dispelled and every affair of this world and the next is set right, lest Thy anger should descend upon me or Your displeasure light upon me.  I need only Your pleasure and satisfaction for only You enable me to do good and evade the evil.  There is no power and no might but You.”

The Lord then sent the angel of mountains, seeking the permission of the Prophet to join together the two hills and crush the city of Taif, between which it was located.  Out of his great tolerance and mercy, the Messenger of God replied,

“No!  For, I hope that God will bring forth from their loins people who will worship God alone, associating nothing with Him.” (Saheeh Muslim)

His mercy and compassion was so great that on more than one occasion, God, Himself, reprimanded him for it.  One of the greatest opponents of Islam and a personal enemy, was Abdullah ibn Ubayy, the leader of the hypocrites of Medina.  Outwardly proclaiming Islam, he surreptitiously inflicted great harm to the Muslims and the mission of the Prophet.  Knowing his state of affairs, the Prophet Muhammad still offered the funeral prayer for him and prayed to God for his forgiveness.  The Quran mentions this incident in these words:

“And never (O Muhammad) pray for one of them who dies, nor stand by his grave.  Lo!  They disbelieve in God and His Messenger, and they died while they were evil doers.” (Quran 9:84)

Abdullah ibn Ubayy worked all his life against Muhammad and Islam and left no stone unturned so as to bring him into disrepute and try to defeat his mission.  He withdrew his three hundered supporters in the battle of Uhud and thus almost broke the backbone of the Muslims at one stroke.  He engaged in intrigues and acts of hostility against the Prophet of Islam and the Muslims.  It was he who tried to bring shame to the Prophet by inciting his allies to falsely accuse the Prophet’s wife, Aisha, of adultery in order to discredit him and his message.

Next: The Forgiveness of Muhammad Shown to Non-Muslims (part 2 of 2)

Mashaallah, I just admire on how our prophet (PBUH) was forgiving non-muslims on their cruel attitude, pray Allah SWT to grant us patience and the strength to forgive everyone, so that Allah SWT forgives our sins...