The Fifth Pillar of Islam: The Pilgrimage (Hajj)

Description: The merits and various rites performed in Hajj, the fifth of the five obligatory fundamental Muslim practices. 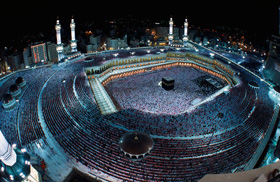 The Hajj (pilgrimage to Mecca) is the fifth of the fundamental Muslim practices and institutions known as the five pillars of Islam.  Pilgrimage is not undertaken in Islam to the shrines of saints, to monasteries for help from holy men, or to sights where miracles are supposed to have occurred, even though we may see many Muslims do this.  Pilgrimage is made to the Kaaba, found in the sacred city of Mecca in Saudi Arabia, the ‘House of God,’ whose sanctity rests in that the Prophet Abraham built it for the worship of God.  God rewarded him by attributing the House to himself, in essence honoring it, and by making it the devotional epicenter which all Muslims face when offering the prayers (salah).  The rites of pilgrimage are performed today exactly as did by Abraham, and after him by Prophet Muhammad, peace be upon them.

Pilgrimage is viewed as a particularly meritorious activity.  Pilgrimage serves as a penance - the ultimate forgiveness for sins, devotion, and intense spirituality.  The pilgrimage to Mecca, the most sacred city in Islam, is required of all physically and financially able Muslims once in their life.  The pilgrimage rite begins a few months after Ramadan, on the 8th day of the last month of the Islamic year of Dhul-Hijjah, and ends on the 13th day.  Mecca is the center towards which the Muslims converge once a year, meet and refresh in themselves the faith that all Muslims are equal and deserve the love and sympathy of others, irrespective of their race or ethnic origin.  The racial harmony fostered by Hajj is perhaps best captured by Malcolm X on his historic pilgrimage:

"Every one of the thousands at the airport, about to leave for Jeddah, was dressed this way.  You could be a king or a peasant and no one would know.  Some powerful personages, who were discreetly pointed out to me, had on the same thing I had on.  Once thus dressed, we all had begun intermittently calling out "Labbayka! (Allahumma) Labbayka!" (At your service, O Lord!) Packed in the plane were white, black, brown, red, and yellow people, blue eyes and blond hair, and my kinky red hair - all together, brothers!  All honoring the same God, all in turn giving equal honor to each other . . .

That is when I first began to reappraise the ‘white man’. It was when I first began to perceive that ‘white man’, as commonly used, means complexion only secondarily; primarily it described attitudes and actions.  In America, ‘white man’ meant specific attitudes and actions toward the black man, and toward all other non-white men.  But in the Muslim world, I had seen that men with white complexions were more genuinely brotherly than anyone else had ever been.  That morning was the start of a radical alteration in my whole outlook about ‘white’ men.

There were tens of thousands of pilgrims, from all over the world.  They were of all colors, from blue-eyed blonds to black-skinned Africans.  But we were all participating in the same ritual displaying a spirit of unity and brotherhood that my experiences in America had led me to believe never could exist between the white and the non-white...  America needs to understand Islam, because this is the one religion that erases from its society the race problem.  Throughout my travels in the Muslim world, I have met, talked to, and even eaten with people who in America would have been considered white - but the ‘white’ attitude was removed from their minds by the religion of Islam.  I have never before seen sincere and true brotherhood practiced by all colors together, irrespective of their color."

Thus the pilgrimage unites the Muslims of the world into one international fraternity.  More than two million persons perform the Hajj each year, and the rite serves as a unifying force in Islam by bringing followers of diverse backgrounds together in worship.  In some Muslim societies, once a believer has made the pilgrimage, he is often labeled with the title ‘hajji’ ; this, however, is a cultural, rather than religious custom.  Finally, the Hajj is a manifestation of the belief in the unity of God - all the pilgrims worship and obey the commands of the One God.

At certain stations on the caravan routes to Mecca, or when the pilgrim passes the point nearest to those stations, the pilgrim enters the state of purity known as ihram. In this state, the certain ‘normal’ actions of the day and night become impermissible for the pilgrims, such as covering the head, clipping the fingernails, and wearing normal clothing in regards to men. Males remove their clothing and don the garments specific to this state of ihram, two white seamless sheets that are wrapped around the body.  All this increases the reverence and sanctity of the pilgrimage, the city of Mecca, and month of Dhul-Hijjah. There are 5 stations, one on the coastal plains northwest of Mecca towards Egypt and one south towards Yemen, while three lie north or eastwards towards Medina, Iraq and Najd.  The simple garb signifies the equality of all humanity in God’s sight, and the removal of all worldly affections.  After entering the state of ihram, the pilgrim proceeds to Mecca and awaits the start of the Hajj.  On the 7th of Dhul-Hijjah the pilgrim is reminded of his duties, and the rituals commence on the 8th of the month. The pilgrim visits the holy places outside Mecca - Arafah, Muzdalifah, and Minaa - prays, sacrifices an animal in commemoration of Abraham’s sacrifice, throws pebbles at specific pillars at Minaa, and shortens or shaves his head. The rituals also involve walking seven times around the sacred sanctuary, or Kaaba, in Mecca, and ambulating, walking and running, seven times between the two small hills of Mt. Safaa and Mt. Marwah.  Discussing the historical or spiritual significance of each rite is beyond the scope of this introductory article.

Apart from Hajj, the "minor pilgrimage" or umrah is undertaken by Muslims during the rest of the year.  Performing the umrah does not fulfill the obligation of Hajj.  It is similar to the major and obligatory Islamic pilgrimage (hajj), and pilgrims have the choice of performing the umrah separately or in combination with the Hajj.  As in the Hajj, the pilgrim begins the umrah by assuming the state of ihram.  They enter Mecca and circle the sacred shrine of the Kaaba seven times.  He may then touch the Black Stone, if he can, pray behind the Maqam Ibrahim, drink the holy water of the Zamzam spring.  The ambulation between the hills of Safa and Marwah seven times and the shortening or shaving of the head complete the umrah.

Previous: The Fourth Pillar of Islam: The Fast of Ramadan

Islam is the only solution to worlds miseries(materialism and jealousy). Anyone who is good will definitely accept Islam. And the only prayer i pray from nowonwards to god is please convert the whole world to the divine and good Islam. From my side i will definitely do my best to worship Allah and seek his mercy under whom we are equal. Thank you

Wow. this has helped me alot. Thank you.

I especially liked the Malcolm X quotes. Puts a practical application to the Pilgrimage.

all that is here is good for a muslim.

Assalamualikum, This article increases the knowledge of every Muslim and reminds me of lectures given by Islamic scholars of cordoba hajj tours, United States, through which I performed the hajj

Now i know and understand the 5 pillars of Islam

Thank you for information, I would like to read further and understand.

Islam is a true Religion