The Story of Joseph (part 3 of 7): Sold into Slavery

Description: Joseph is rescued from the well, sold into slavery, and is established in one of the greatest houses of Egypt. 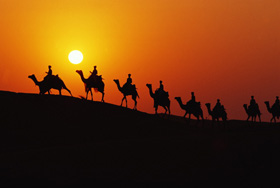 Lead astray by the whisperings of Satan and filled with jealousy and pride, the brothers deceived their father Jacob and betrayed their young brother.  Thrown deep into a well by his older brothers, Joseph the beloved son of Prophet Jacob, clung   throughout the long night to a ledge and tried to put his trust in God.  The time passed slowly and  the heat of the morning sun beat down heavily on the scorched earth.  Later that day a caravan travelling to Egypt approached the well.

When the caravan arrived. the travellers went about their business, some tethering camels, others tending to the horses, some unpacking, and others preparing food.  The water drawer went to the well and lowered his bucket, happy in anticipation of cool, clear water.  Joseph was startled as the bucket hurtled towards him. but before it hit the water, he reached out and clung to the rope.  Surprised by the weight of the bucket, the man peered over the edge of the well.  He was shocked and excited when he saw a child clinging to the rope.  The man called his companions to help him draw the child from the well and all were amazed at the sight of this beautiful child, not quite a youth, who stood before them.

Looking at the boy, the water bearer could not hide his excitement and cried aloud, “What good news!”  (Quran 12:19)  The man was overjoyed; he immediately decided to sell Joseph, knowing that he stood to make a lot of money in the slave market.  Just as the brothers had predicted, the men of the caravan took Joseph to Egypt expecting to sell him for a handsome price.  The slave markets of Egypt were teeming with people, some buying, and some selling, others just watching the proceedings.  The beautiful boy found in the well attracted many onlookers, and bidding for him was swift.  The price continued to rise beyond their expectations, and Joseph was eventually purchased by Azeez, the Chief Minister of Egypt.

However, God tells us in the Quran that they sold him for a low price.  (12:20) This does not seem to make sense since the men of the caravan were jubilant by the price they received.  God described the price as low because Joseph was actually worth more then they could ever have imagined.  The men did not realise just who this child would grow up to be.  They believed that although beautiful, Joseph was insignificant.  Nothing could have been further from the truth, if they had of sold him for his weight in gold, it would have been a cheap price for the man who would grow up to be Joseph, Prophet of God.

In the House of Azeez

The Chief Minister, Azeez, sensed immediately that this was no ordinary child.  He took him to his home, one of the great mansions of Egypt, and said to his wife,

“‘Make his stay comfortable, may be he will profit us or we shall adopt him as a son.’  Thus did We establish Joseph in the land, that We might teach him the interpretation of events.” (Quran12:21)

God placed Joseph into the home of the second most important person in Egypt.  Chief Minister Azeez was more then just a prime minister, he was also the treasurer of Egypt.  God established Joseph in the land in order to teach him wisdom and understanding.  The struggling and striving required by Joseph to overcome the separation from his father and family, the difficulty of being betrayed by your older presumably protective brothers, the ordeal in the well and the humiliation of being sold into slavery were all trials designed to mould Joseph’s character.  They were the first steps on the ladder to greatness.  God used the treachery of Joseph’s brothers to fulfil His plan for Joseph’s establishment as a Prophet of God.

The brothers of Joseph believed they had matters under control when they put their brother in the well, but in reality, the matter was out of their hands.  God is the one in control of all affairs.  God was decisive in His action, and His plan was carried out despite the treachery, jealousy  and pride of others.  Joseph found himself in the decision making centre of Egypt with a man who seemed kind and somehow aware of Joseph’s special qualities.  While longing for his father and brother Benjamin, Joseph  was well taken care, and lived in luxurious surroundings.  Joseph grew to manhood in the house of Azeez and God bestowed on him good judgement and knowledge.

“And when he (Joseph) attained his full manhood, We gave him wisdom and knowledge (the Prophethood), thus We reward the doers of good.” (Quran12:22)

God granted Joseph both knowledge and wisdom.  Not one just one, but both qualities.  He was given the ability to understand and the ability to use good judgement when applying his knowledge.  This is not always the case.  There are many people throughout the history of the world, up to and including the present day, who have knowledge but do not have the ability or judgement to apply that knowledge in an effective way.

One of the great scholars of Islam, Imam Abu Haneefa, held regular learning circles in which presented a topic for debate.  The topic would be discussed and opinions given, then Imam Abu Haneefa would give a final verdict.  This way of teaching was unique at that time.  There was amongst this circle of learning a scholar of the narrations of Prophet Muhammad; he recited one that Imam Hanifa  had never heard before.  Just at that time, a woman approached the circle and asked a question.  The scholar replied that he did not  know the answer, but  Imam Abu Hanifa  was able to answer her question.  He then turned to the members of the learning circle and said.  “I know the answer to this question from the hadeeth our brother had just mentioned”.  Thus, it is possible to have the knowledge but not know how to apply it.  Prophet Joseph, as with all the Prophets of God was given the knowledge and the wisdom to understand and apply it.