The Story of Joseph (part 1 of 7): The Tale Begins

Description: Joseph receives a prophecy, and jealousy takes the better of his brothers. 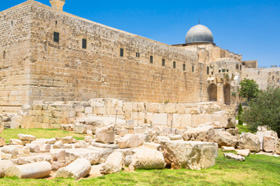 This is a tale of intrigue and deception, of jealousy, pride, and passion… and it is not The Bold and the Beautiful.  It is a saga of patience, loyalty, bravery and compassion… and it is not Dr Phil or Oprah.  It is the story of Prophet Joseph, may God shower him with His praises.  The same Joseph known from the Andrew Lloyd Webber production of Joseph and the Amazing Technicolor Dreamcoat, and the same Prophet Joseph known in Christian and Jewish traditions.  God revealed this story to Prophet Muhammad when an Israelite asked him to tell him what he knew about Joseph.[1]  Stories in Quran are usually told in small bit and made known over several chapters; the story of Joseph however, is unique.  It was revealed in one chapter, from the beginning to the end.  It is the complete story and experience of Prophet Joseph.  We learn about Joseph’s joys, troubles and sorrows, and move with him through the years of his life as he arms himself with piety and patience, and in the end emerges victorious.  The story of Joseph begins with a dream, and ends with the dream’s interpretation.

“We relate unto you (Muhammad) the best of stories through Our Revelations unto you, of this Quran.  And before this (i.e. before the coming of Divine Inspiration to you), you were among those who knew nothing about it.” (Quran 12:3)

Joseph was young boy, handsome, happy and very much loved by his father.  He awoke one morning excited about a dream and ran straight to his father happily explaining what he had seen in his dream.  Joseph’s father listened attentively to his beloved son and his face shone with joy, for Joseph related a dream that spoke of the fulfilment of a prophecy.  Joseph said,

“O my father!  Verily, I saw (in a dream) eleven stars and the sun and the moon; I saw them prostrating themselves to me.” (Quran 12:4)

Joseph was one of 12 brothers whose father was Prophet Jacob and whose great grandfather was Prophet Abraham.  This prophecy spoke of keeping Abraham’s message to worship One True God alive.  Prophet Abraham’s grandson Jacob interpreted the dream to mean that Joseph would be the one to carry the ‘Light of God’s house”[2]  However as quickly as the joy had sprung into Jacob’s face, it vanished, and he implored his son not to relate his dream to his brothers.  Jacob said,

“O my son!  Relate not your vision to your brothers, lest they arrange a plot against you.  Verily!  Satan is to man an open enemy!  Thus will your Lord choose you, teach you the interpretation of dreams (and other things), and perfect His Favour on you and on the offspring of Jacob, as He perfected it on your fathers, Abraham, and Isaac aforetime!  Verily!  Your Lord is All-Knowing, All-Wise.” (Quran 12:5-6)

Jacob knew that his sons (Joseph’s brothers) would not accept the interpretation of this dream or the advancement of Joseph over themselves.  Jacob was filled with fear.  The ten older brothers were already jealous of their younger brother.  They recognised their father’s particular affection for him.  Jacob was a prophet, a man dedicated to submission to One True God and he treated his family and his community with fairness, respect and equitable love; however his heart was drawn to the gentle qualities evident in his son Joseph.  Joseph also had a younger brother named Benjamin, who, at this stage of the story, was too young to be involved in any of the trickery and deception brewing.

While Prophets and righteous men are eager to spread the message of submission to God, Satan is waiting to entice and incite mankind.  He loves trickery and deception and was now sewing the seeds of discord between Jacob and his elder sons.  The jealousy the brothers felt toward Joseph blinded their hearts, disoriented their thinking and made small things seem insurmountable, large things seeming insignificant.  Joseph heeded his father’s warning and did not speak of his dream to his brothers; but even so, they became obsessed and overwhelmed by their jealousy.  Without knowing about Joseph’s dream, they hatched a plan to kill him.

Joseph and Benjamin were the sons of Jacob’s second wife.  The older boys considered themselves men.  They were older, they were stronger and saw in themselves many good qualities.  Blinded by jealousy, they perceived Joseph and Benjamin as too young and without consequence in the life of the family.  They refused to understand why their father doted on them.  The older boy’s crooked thinking made them accuse their father of being misguided which, in reality, was far from the truth.  Satan made their thoughts fair seeming to them and their utter misguidance was shown clearly, when they spoke of killing Joseph and immediately repenting to God for this despicable act.

“They said, "Truly, Joseph and his brother are loved more by our father than we, but we are a strong group.  Really, our father is in a plain error.  Kill Joseph or cast him out to some (other) land, so that the favour of your father may be given to you alone, and after that you will be righteous folk (by intending to repent).” (Quran 12:8-9)

One amongst them felt the error of their ways and suggested that rather than killing Joseph, they should drop him into a well.  When found by some passing traveller he would be sold into slavery, thus rendering him as good as dead to the family.  They believed, in their blindness, that the absence of Joseph would remove him from their father’s thoughts.  The brothers continued to hatch their evil plan.  Satan was toying with them, casting thoughts into their minds and whispering misguidance into their ears.  The brothers finished their discussion pleased with themselves and believing they had drafted a clever plan.  They approached Jacob with   a plan to take Joseph into the desert with them, on the pretext of letting him play and enjoy himself.  Fear leapt into Jacob’s heart.

[1] Ibn Katheer.  Stories of the Prophets.

Next: The Story of Joseph (part 2 of 7): Treachery and Deception