Description: An analytical look into the basis and proofs for themysterious crucifixion of Jesus Christ. 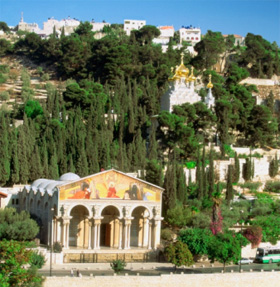 Of all the Christian mysteries, none rank as highly as the concept of Christ’s crucifixion and atoning sacrifice.  In fact, Christians base their salvation on this one tenet of faith.  And if it really happened, shouldn’t we all?

If it really happened, that is.

Now, I don’t know about you, but the concept of Jesus Christ having atoned for the sins of mankind sounds pretty good to me.  And shouldn’t it?  I mean, if we can trust that someone else atoned for all of our sins, and we can go to heaven on that concept alone, shouldn’t we instantly close on that deal?

If it really happened, that is.

So let’s check this out.  We’re told Jesus Christ was crucified.  But then again, we’re told a lot of things that later prove to be doubtful or even untrue, so it would be reassuring if we could verify the fact.

Umm, one problem.  We don’t know who the authors were.  This is a less popular Christian mystery (i.e., waaay less popular) – the fact that all four gospels of the New Testament are anonymous.[1]  Nobody knows who wrote them.  Graham Stanton tells us, “The gospels, unlike most Graeco-Roman writings, are anonymous.  The familiar headings which give the name of an author (‘The Gospel according to . . .’) were not part of the original manuscripts, for they were added only early in the second century.”[2]

Added in the second century?  By whom?  Believe it or not, that is anonymous as well.

But let’s forget all that.  After all, the four gospels are part of the Bible, so we must respect them as scripture, right?

Well, maybe not.  After all, The Interpreter’s Dictionary of the Bible states, “It is safe to say that there is not one sentence in the NT in which the MS [manuscript] tradition is wholly uniform.”[3]  Add to that Bart D. Ehrman’s now famous words, “Possibly it is easiest to put the matter in comparative terms: there are more differences in our manuscripts than there are words in the New Testament.”[4]

Now, wait a minute.  Jesus’ righteous followers would have hung on his every word.  On the other hand, Mark 14:50 tells us that all the disciples deserted Jesus in the garden of Gethsemane.  But okay, some people – not disciples, I guess, but some people (anonymous, of course) – hung on his every word, hoping for some parting words of wisdom, and they heard . . . different things?

Believe it or not, after this point, the gospel records become even more inconsistent.

Following the alleged resurrection, we hardly find a single issue the four gospels (Matthew 28, Mark 16, Luke 24, and John 20) agree upon.  For example:

Who went to the tomb?

Matthew: “Mary Magdalene and the other Mary”

Mark: “Mary Magdalene, Mary the mother of James, and Salome”

Luke: “The women who had come with him from Galilee” and “certain other women”

Why did they go to the tomb?

Matthew: “To see the tomb”

Mark: They “brought spices, that they might come and anoint him”

John: no reason given

Was there an earthquake (something nobody in the vicinity would be likely to either miss or forget)?

Did an angel descend?  (I mean, come on, guys – an angel?  Are we to believe that three of you somehow missed this part?)

Who rolled back the stone?

Matthew: The angel (the one the other three anonymouses – now, let’s see, would that be “anonymouses” or “anonymice”?  – didn’t see)

Who was at the tomb?

Matthew: The angel was sitting on the stone, outside the tomb.

Mark: The young man was in the tomb, “sitting on the right side.”

Luke: The two men were inside the tomb, standing beside them.

John: The two angels were “sitting, one at the head and the other at the feet, where the body of Jesus had lain.”

By whom and where was Jesus first seen?

Matthew: Mary Magdalene and the “other Mary,” on the road to tell the disciples.

Mark: Mary Magdalene only, no mention where.

Luke: Two of the disciples, en route to “a village called Emmaus, which was about seven miles from Jerusalem.”

John: Mary Magdalene, outside the tomb.

So where does this leave us, if not wondering whose idea of scripture this is?

But, hey, Christians tell us Jesus had to die for our sins.  A typical conversation might go something like this:

Trinitarian: No, no, perish the thought.  Only the man died.

Monotheist: In that case, the sacrifice didn’t need to be divine, if only the man-part died.

Trinitarian: No, no, no.  The man-part died, but Jesus/God had to suffer on the cross to atone for our sins.

Monotheist: What do you mean “had to”?  God doesn’t “have to” anything.

Monotheist: Then we have a different concept of God.  The God I believe in doesn’t have needs.  My God never wants to do something but can’t because He needs something to make it possible.  My God never says, “Gee, I want to do this, but I can’t.  First I need this certain something.  Let’s see, where can I find it?” In that scenario God would be dependent upon whatever entity could satisfy His needs.  In other words, God would have to have a higher god.  For a strict monotheist that’s just not possible, for God is One, supreme, self-sufficient, the source of all creation.  Humankind has needs, God doesn’t.  We need His guidance, mercy and forgiveness, but He doesn’t need anything in exchange.  He may desire servitude and worship, but he doesn’t need it.

Trinitarian: But that’s the point; God tells us to worship Him, and we do that through prayer.  But God is pure and holy, and humankind are sinners.  We can’t approach God directly because of the impurity of our sins.  Hence, we need an intercessor to pray through.

Trinitarian: Nope, he was sinless.

Monotheist: How pure was he?

Monotheist: But then we can’t approach Jesus any more than we can God, by your criterion.  Your premise is that humankind can’t pray directly to God because of the incompatibility of sinful man and the purity of anything 100% holy.  If Jesus was 100% holy, then he’s no more approachable than God.  On the other hand, if Jesus wasn’t 100% holy, then he was himself tainted and couldn’t approach God directly, much less be God, the Son of God, or partner with God.

A fair analogy might be that of going to meet a supremely righteous man—the holiest person alive, holiness radiating from his being, oozing from his pores.  So we go to see him, but are told the “saint” won’t agree to the meeting.  In fact, he can’t stand to be in the same room with a sin-tainted mortal.  We can talk with his receptionist, but the saint himself?  Fat chance! He’s much too holy to sit with us lesser beings.  So what do we think now?  Does he sound holy, or crazy?

Common sense tells us holy people are approachable—the holier, the more approachable.  So why should humankind need an intermediary between us and God?  And why would God demand the sacrifice of what Christians propose to be “His only begotten son” when, according to Hosea 6:6, “I desire mercy, and not sacrifice.” This lesson was worthy of two New Testament mentions, the first in Matthew 9:13, the second in Matthew 12:7.  Why, then, are clergy teaching that Jesus had to be sacrificed?  And if he was sent for this purpose, why did he pray to be saved?

Perhaps Jesus’ prayer is explained by Hebrews 5:7, which states that because Jesus was a righteous man, God answered his prayer to be saved from death: “In the days of his flesh, Jesus offered up prayers and supplications, with loud cries and tears, to the one who was able to save him from death, and he was heard because of his reverent submission” (Hebrews 5:7, NRSV).  Now, what does “God heard his prayer” mean—that God heard it loud and clear and ignored it?  No, it means God answered his prayer.  It certainly can’t mean that God heard and refused the prayer, for then the phrase “because of his reverent submission” would be nonsensical, along the lines of, “God heard his prayer and refused it because he was a righteous man.”

Hm.  So wouldn’t that suggest that Jesus might not have been crucified in the first place?

But let’s back up and ask ourselves, why do we have to believe to be saved?  On one hand, original sin is held to be binding, whether we believe in it or not.  On the other hand, salvation is held to be conditional upon acceptance (i.e., belief) of the crucifixion and atonement of Jesus.  In the first case, belief is held to be irrelevant; in the second, it’s required.  The question arises, “Did Jesus pay the price or not?” If he paid the price, then our sins are forgiven, whether we believe or not.  If he didn’t pay the price, it doesn’t matter either way.  Lastly, forgiveness doesn’t have a price.  A person can’t forgive another’s debt and still demand repayment.  The argument that God forgives, but only if given a sacrifice He says He doesn’t want in the first place (see Hosea 6:6, Matthew 9:13 and 12:7) drags a wing and cartwheels down the runway of rational analysis.  From where, then, does the formula come?  According to scripture (the aforementioned anonymous scripture lacking manuscript uniformity), it’s not from Jesus.  Furthermore, the Christian formula for salvation hinges off the concept of original sin, and we have to ask ourselves why we should believe that concept if we can’t substantiate the rest of the Christian formula.

But that is a different discussion.

Copyright © 2008 Laurence B. Brown—used by permission.

The author’s website is www.leveltruth.com.  He is the author of two books of comparative religion entitled MisGod’ed and God’ed, as well as the Islamic primer, Bearing True Witness.  All of his books are available through Amazon.com.

[4] Ibid., The New Testament: A Historical Introduction to the Early Christian Writings. p. 12.

very comprehensive.. :) wish that people from outside Islam religion would give their souls a short time in searching for truth. They will be enlightened, just a few minutes of reading, use of common sense & prayers in Allah (our Only One True God).. & they will be directed to the right path before death comes.