Description: Having Respect for God means obeying Him. 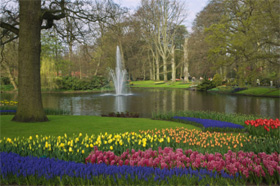 The condition of being honoured esteemed or well regarded.  This is the most commonly understood definition of respect.  In fact, the thesaurus goes on the describe respect as a courteous regard for peoples feelings and links respect to honour, kindness, obedience and tolerance.  So what is the role of respect in Islam?  Islam states that it is the responsibility of each individual to treat all of creation with respect, honour and dignity.  The most deserving of respect is the Creator Himself.  Respect begins with loving and obeying the commandments of God and from this respect flow all the manners and high standards of morality that are inherent in Islam.

“And whosoever obeys God and His Messenger, fears God, and keeps his duty (to Him), such are the successful ones.” (Quran 24:52)

To be one of those who are successful, Islam requires that each individual learn to obey the Creator and thus treat humankind, our environment, the believers and ourselves with respect.  Bearing in mind that the believers are one nation, and if one part of the nation is in peril so too are all its parts, respect for each other is essential.  Islam teaches us that we are held accountable not only for our thoughts and actions but for the influence, we have over others and the creation.  Islam asks us to enjoin the good and forbid the evil.  Islam binds respect to peace, love and compassion, all attributes of the One God, therefore to fulfil our obligation to honour and obey God one must respect the honour, reputation and privacy of others.  Respect involves staying completely away from the major sins of backbiting, lying, slander, and gossip.

Respect for humanity means staying away from sins that will sow discord among the people and lead to destruction.  Respect includes loving for our brothers and sisters what we love for ourselves.  Respect involves treating others the way we expect to be treated and the way we hope God will treat us –with compassion, love and mercy.  Major sins put a barrier between humanity and God’s Mercy and cause all the torment, misery and evil in this world and the hereafter.  God commands us to stay away from sin and to strive against our own destructive character flaws.  He also singles out suspicion, backbiting and gossip as bringing about nothing but shame and disgrace.

“O you who believe!  Avoid much suspicion, indeed some suspicions are sins.  And spy not, neither backbite one another.  Would one of you like to eat the flesh of his dead brother?  You would hate it (so hate backbiting).  And fear God.  Verily, God is the One Who accepts repentance, Most Merciful.” (Quran 49:12)

Ibn Abbass, a companion of Prophet Muhammad and Quran commentator said God forbade backbiting just as He forbade the eating of dead flesh.  Eating dead flesh is something that people naturally have abhorrence to and they should have the same natural abhorrence to backbiting one another.  Respect involves caring for one another not shredding characters the way carrion would shred a dead animal.

Some people might say that backbiting is merely words and ask what harm it can do.  Words are indeed powerful and have far-reaching effects.  In addition to the obvious lack of respect involved in back biting, mere words cause pain to the one maligned and consign the backbiter to the fires of Hell.  Prophet Muhammad, may the mercy and blessings of God be upon him,  warned us of the fate awaiting those who utter disrespect.  He said, “A man might speak a word without thinking about its implications, but because of it, he will plunge into the Hellfire further than the distance between the east and west.”[1]

Having established that backbiting is anything but mere words how can we define exactly what it is.  Backbiting is talking about somebody in a derogatory way or in a way that would not be pleasing to the one being spoken about.  It is called back biting because it is usually done when the person being maligned is absent or “behind his back”.  Prophet Muhammad defined backbiting as “to mention about your brother something that he would dislike having mentioned about him”.[3]  Imam An Nawawi commented that backbiting included “what concerns his body, his religious practice, his worldly station, his physical appearance, his moral character, his wealth, his parents, his children, his spouse, his servant, his clothing, his activities, his smiles and frowns and anything else that pertains to him.  It does not matter if you mention it explicitly by word or implicitly by indication or a gesture…”

In the same saying mentioned above, the Prophet Muhammad was asked about backbiting in relation to truthful comments.  He explained the severity of backbiting, and explained the difference between it and slander, by saying, “If what you said about your brother is true, then you have backbitten him.  If what you said about him is false, then you have slandered him”.[4]  Slander is making a false statement; it is a major sin and deserves a severe punishment.  God says in the Quran:

“And those who malign believing men and women undeservedly bear upon themselves the guilt of slander and a manifest sin.” (33:58)

In another narration of Prophet Muhammad, his beloved wife Aisha made a comment about one of her co-wives by describing her as short, or small in stature.  Prophet Muhammad responded in a way that made clear the severity of her words.  He said, “You have said a word that if it was to be mixed with the water of the sea, it would contaminate it.”[5]

Backbiting has become so widespread nowadays that people use it as a way of expressing anger and jealousy.  Those who engage in it are disrespecting God by disobeying Him and harming others.  Magazines and television shows are devoted to gossiping and prying into the private lives of others.  There is no respect for privacy, and contrary to popular belief, the lives of others are not source material for gossip sessions.  The person who habitually engages in backbiting and gossip and who does not struggle against his desires and begs for God’s forgiveness has lost all respect for himself for he no longer fears the fires of Hell.  The sin is grave, the punishment severe, but God is Merciful and always accepts sincere repentance.

“...if any of you does evil in ignorance, and thereafter repents and does righteous good deeds (by obeying God), then surely, He is Oft ­Forgiving, Most Merciful.” (Quran 6:54)