Muhammad’s Claim to Prophethood (part 1 of 3): Proofs of His Prophethood

Description: Evidence for the claim that Muhammad was a true prophet and not an imposter.  Part 1: Some proofs that led various companions to believe in his prophethood. 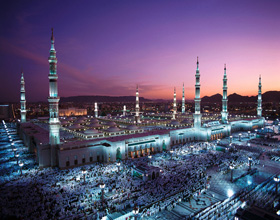 Divine facilitation is proportionate to human need.  God makes acquisition easier as the need of humans increase.  Air, water, and sunlight are necessary for human survival, and thus God has granted their acquisition to all without hardship.  The greatest human need is to know the Creator, and thus, God has made it easy to know Him.  The evidence for God, however, differs in its nature.  In its own way, everything in creation is evidence of its Creator.  Some evidence is so obvious that any lay person can immediately ‘see’ the Creator, for instance, the cycle of life and death.  Others ‘see’ the handiwork of the Creator in the elegance of mathematical theorems, universal constants of physics, and the development of the embryo:

"Behold!  in the creation of the heavens and the earth, and the alternation of night and day, there are indeed signs for men of understanding." (Quran 3:190)

Like the existence of God, human beings need evidence to establish the truth of prophets who spoke in His name.  Muhammad, like the prophets before him, claimed to be God’s final prophet to humanity.  Naturally, the evidence for his veracity is diverse and numerous.  Some are obvious, while others are apparent only after deep reflection.

Divine witness by itself is sufficient without any other evidence.  God’s witness for Muhammad lies in:

(a)  God’s past revelations to earlier prophets which prophesize Muhammad’s appearance.

(b)  God’s Acts: the miracles and ‘signs’ He gave to support Muhammad’s claim.

How did it all begin in the early days of Islam?  How were the first believers convinced he was God’s prophet?

The first person to believe in the prophethood of Muhammad was his own wife, Khadija.  When he returned home trembling out of fear after receiving divine revelation, she was his solace:

"Never!  By God, God will never disgrace you.  You keep good relations with your relatives, help the poor, serve your guests generously, and assist those hit with calamities." (Saheeh Al-Bukhari)

She saw in her husband a man God would not humiliate, because of his virtues of honesty, justice, and helping the poor.

His closest friend, Abu Bakr who had known him all his life and was almost the same age, believed the moment he heard the words, ‘I am God’s Messenger’ without any additional confirmation other than the open book of his friend’s life.

Another person who accepted his call on merely listening to it, was ‘Amr’[1]  He says:

"I used to think before Islam that people were in error and they were on nothing.  They worshipped idols.  In the meantime, I heard of a man preaching in Mecca; so I went to him…I asked him: ‘Who are you?’  He said: ‘I am a Prophet.’  I again said: ‘Who is a Prophet?’  He said: ‘God sent me.’  I said: ‘What did He send you with?’  He said: ‘I have been sent to join ties of relationship, to break the idols, and to proclaim the unity of God so nothing is associated with Him (in worship).’  I said: ‘Who is with you in this?’  He said: ‘A free man and a slave (referring to Abu Bakr and Bilal, a slave, who had embraced Islam by that time).’  I said: ‘I intend to follow you.’" (Saheeh Muslim)

Dimad was a desert healer who specialized in mental illnesses.  On his visit to Mecca he heard the Meccans say that Muhammad (may the mercy and blessings of God be upon him) was insane!  Confident of his skills, he said to himself, ‘If I were to come across this man, God might cure him at my hand.’  Dimad met the Prophet and said: ‘Muhammad, I can protect (one) who suffers from mental illness or under sorcery, and God cures one whom He so desires at my hand.  Do you desire to be cured?’  The Prophet of God responded, starting with his usual introduction to his sermons:

"Indeed, praise and gratitude is for God.  We praise Him and ask for His help.  He who God guides, none can lead astray, and he who is led astray cannot be guided.  I bear witness no one deserves worship but God, He is One, has no partners, and Muhammad is His Servant and Messenger."

Dimad, stuck by the beauty of the words, asked him to repeat them, and said, ‘I have heard the words of diviners, sorcerers, and poets, but I have never heard such words, they reach the depth of the oceans.  Give me your hand so I may pledge my allegiance to you on Islam.’[2]

After Gabriel brought the first revelation to Prophet Muhammad, Khadija, his wife, took him to visit her old cousin, Waraqa ibn Nawfal, a biblical scholar, to discuss the event.  Waraqa recognized Muhammad from the prophecies of the Bible and confirmed:

"This is the Keeper of Secrets (Angel Gabriel) who came to Moses." (Saheeh Al-Bukhari)

The face can be a window to the soul.  Abdullah ibn Salam, the chief rabbi of Medina at the time, looked at the face of the Prophet when he arrived in Medina, and exclaimed:

"The moment I looked at his face, I knew it was not the face of a liar!" (Saheeh Al-Bukhari)

Many of those around the Prophet who did not accept Islam did not doubt in his veracity, but refused to do so for other reasons.  His uncle, Abu Talib, aided him throughout his life, confessed to the truthfulness of Muhammad, but refused to break off from the religion of his ancestors out of shame and social status.

Next: Muhammad’s Claim to Prophethood (part 2 of 3): Was He a Liar?