The Victory of the Romans and the Lowest Point on Earth

Description: The Quran lays light on the lowest place of earth. 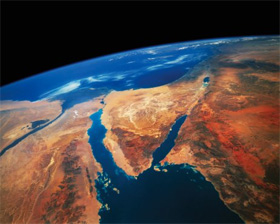 In the early 7th century, the two most powerful empires at the time were the Byzantine[1]  and Persian Empires.  In the years 613 - 614 C.E the two Empires went to war, with the Byzantines suffering a severe defeat at the hands of the Persians.  Damascus and Jerusalem both fell to the Persian Empire.  In the chapter, The Romans, in the Holy Quran, it is stated that the Byzantines had met with a great defeat but would soon gain victory:

“The Romans have been defeated in the lowest land, but after their defeat they will soon be victorious.  Within three to nine years.  The decision of the matter, before and after, is with God.” (Quran 30:2-4)

These verses, above,  were revealed around 620 C.E, almost 7 years after the severe defeat of the Christian Byzantines at the hands of the idolater Persians in 613 – 614 C.E.  Yet it was related in the verses that the Byzantines would shortly be victorious.  In-fact, Byzantine had been so heavily defeated that it seemed impossible for the Empire to even maintain its very existence, let alone be victorious again.

Not only the Persians, but also the Avars, Slavs and Lombards (located to the North and West of the Byzantine Empire) posed serious threats to the Byzantine Empire’s sovereignty.  The Avars had come as far as the walls of Constantinople and  had nearly captured the Emperor, himself.  Many governors had revolted against Emperor Heraclius, and the Empire was on the point of collapse.  Mesopotamia, Syria, Palestine, Egypt and Armenia, which had earlier  belonged to the Byzantine Empire, were invaded by the Persians.  In short, everyone was expecting the Byzantine Empire to be destroyed, but right at that moment the first verses of the chapter, The Romans, were revealed announcing that the Byzantines would regain triumph in a few years time. Shortly after this revelation, the Byzantine Emperor proceeded to order the gold and silver in churches to be melted and turned into money in order both to meet the demanding expenses of the army, and finance his drive to regain the lost territories.

Around 7 years after the revelation of the first verses of The Romans, in December, 627 C.E, a decisive battle between The Byzantine Empire and the Persian Empire was fought in the area around the Dead Sea,[2] and this time it was the Byzantine army which surprisingly defeated the Persians.  A few months later, the Persians had to make an agreement with the Byzantines which obliged them to return the territories they had taken from them.  So, in the end, the victory of the Romans proclaimed by God in the Quran miraculously came through.

Another miracle revealed in the mentioned verses is the announcement of a geographical fact that  no-one would have been able to discover in that period.  In the third verse of  The Romans, it was mentioned that the Romans were defeated “in the lowest land” (Quran 30:3).  Significantly, the places where the main battles took place (in Damascus and Jerusalem) lie in a vast area of low-lying land called the Great Rift Valley.  The Great Rift Valley is a huge 5,000 km fault line in the earth’s crust that runs from northern Syria in the Middle-East of Asia to central Mozambique in East Africa.  The northernmost extension runs through Syria, Lebanon, Palestine and Jordon.  The rift then extends south to the Gulf of Aden, makes its way through East Africa, then finally ends at the lower Zambezi River valley in Mozambique. 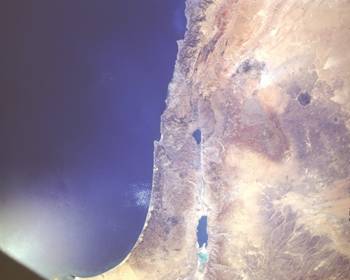 Therefore it becomes clear that the country or prefecture which occupies the rift valley in the vicinity of the Dead Sea is what is meant in the Quran by “the lowest land.”  This is a true miracle of the Quran because no-one could have known or foreseen such a fact in the 7th century due to the fact that satellites and modern day technology were not available at the time.  Once again, the only possible explanation is that Prophet Muhammad had truly received divine revelation from God, The Creator and Originator of the universe.

[1] The Arabs also refer to the Byzantines as the Romans.

[2] The History of Persia Part I: Ancient Persia by Scott Peoples

Man! you are doing a great job spreading the truth of holy quran. Your articles are the best of all in over the web, escpecially views about non-muslims over the quran. May ALLAH(J.J.A) give you more energy and strength to produce conviencing answers to nonmuslims brothers and sisters. We need people like you. May ALLAH give you Jannat-ul-firdous for this. Ameen

I looked at seven translations and NONE of them says anything about "the lowest land" or "the lowest place". They ALL do some variation of "nearest place".

The lowest point on land is Dead Sea, which sits on the top of Dead Sea Rift, a tectonic fault line between the Arabian & African plates. The movement of these plates causes the Dead Sea to sink about 1 meter per year. Dead Sea used to be part of Mediterranean, but over a geologic time scale it became cut off & evaporation concentrated salt in the water. Dead Sea is more than 25% mineral salts having highest level of salinity.

Really no one to worship but Allah

May Allah bless u bcos u are doing a great job and that will help as to no the truet about Muslim and teach others no how sweet Muslim is .Amen........

Some of you would be confused because many translation uses the word 'nearest' instead of lowest. The original word used in Quran is "Adnaa". Anyone can search dictionary and know that the word means lowest. It is also superlative verb like akbar = biggest, ahsan = best etc. If the meaning was nearest, it does not make sense. because Jordan border or dead sea area where the the war took place is not at all the nearest place to Madeena or Makkah. So the translators were wrong. Qur'an never becomes wrong. Here the meaning is lowest, not nearest.