Description: Some of the most common questions asked about Islam. Part 1: What is Islam?  What are Muslims?  Who is Allah?  Who is Muhammad? 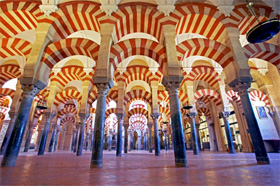 Islam is the name of the religion, or more properly the ‘way of life’, which God (Allah) has revealed and which was practiced by all of the Prophets and Messengers of God that He sent to mankind.  Even the name stands out unique among other religions in that it means a state of being; it does not refer to any particular person, such as Christianity, Buddhism or Zoroastrianism; a tribe like Judaism; or a nation like Hinduism.  The root Arabic word from which Islam is derived implies peace, safety, salutation, protection, blamelessness, wholesomeness, submission, acceptance, surrender, and salvation.  Islam specifically means being in the state of submission to God, worshipping Him Alone, and reverently accepting and obeying His Law.  Through this submission, the peace, security, and wholesome well-being implied in its literal meaning is achieved.  Hence, a Muslim or Muslimah is a person (male or female) in that state of submission.  A person’s Islam weakens through sins, ignorance, and wrong-doing, and becomes nullified in totality by associating partners with God or disbelieving in Him.

The Arabic word “Muslim” literally means “someone who is in a state of Islam (submission to the will and law of God)”.  The message of Islam is meant for the entire world, and anyone who accepts this message becomes a Muslim.  Some people mistakenly believe that Islam is just a religion for Arabs, but nothing could be further from the truth.  In actuality, over 80% of the world's Muslims are not Arabs! Even though most Arabs are Muslims, there are Arabs who are Christians, Jews and atheists.  If one just takes a look at the various peoples who live in the Muslim World - from Nigeria to Bosnia and from Morocco to Indonesia - it is easy enough to see that Muslims come from all different races, ethnic groups, cultures and nationalities.  Islam has always been a universal message for all people.  This can be seen in the fact that some of the early companions of the Prophet Muhammad were not only Arabs, but also Persians, Africans and Byzantine Romans.  Being a Muslim entails complete acceptance and active obedience to the revealed teachings and laws of God the Exalted.  A Muslim is a person who freely accepts basing his beliefs, values and faith on the will of Almighty God.  In the past, even though you do not see it as much today, the word “Mohammedans” was often used as a label for Muslims.  This label is a misnomer, and is the result of either willful distortion or sheer ignorance.  One of the reasons for the misconception is that Europeans were taught for centuries that Muslims worshipped the Prophet Muhammad in the same way that Christians worship Jesus.  This is absolutely not true, since one is not considered a Muslim if he worships anyone or anything besides God the Exalted.

Often one hears the Arabic word “Allah” being used in discussions regarding Islam.  The word “Allah” is simply the Arabic word for Almighty God, and is the same word used by Arabic speaking Christians and Jews.  As a matter of fact, the word Allah was in use far before the word God ever came into existence, since English is a relatively new language.  If one were to pick up an Arabic translation of the Bible, one would see the word “Allah” being use where the word “God” is used in English.  For instance, Arabic speaking Christians say that Jesus is, according to their canon belief, the Son of Allah.  In addition, the Arabic word for Almighty God, “Allah”, is quite similar to the word for God in other Semitic languages.  For example, the Hebrew word for God is “Elah”.  For various reasons, some non-Muslims mistakenly believe that Muslims worship a different God than the God of Moses and Abraham and Jesus.  This is certainly not the case, since the Pure Monotheism of Islam calls all people to the worship of the God of Noah, Abraham, Moses, Jesus and all the other prophets, peace be upon them.

The last and final prophet whom God sent to humanity was the Prophet Muhammad, may the mercy and blessings of God be upon him.  At the age of forty, he received the revelation from God.  He then spent the remaining portion of his life explaining, and living the teachings of Islam, the religion that God revealed to him.  The Prophet Muhammad is the greatest of all prophets for many reasons, but primarily because he was chosen by God to be the last prophet - whose mission to guide humanity would continue until the Last Day - and because he has been sent as a mercy to all of mankind.  The result of his mission has brought more people into the pure belief in One God than any other prophet.  Since the beginning of time, God sent prophets to the earth, each one to his own specific nation.  The Prophet Muhammad, however, was sent as the final Messenger to all of humanity.

Even though other religious communities have claimed to believe in One God, over time, some corrupted ideas entered into their beliefs and practices leading them away from the pure sincere monotheism of the prophets.  Some took their prophets and saints as intercessors with Almighty God.  Some even believed that their prophets were the manifestations of God, or “God Incarnate” or the “Son of God”.  All of these misconceptions lead to the worship of created beings instead of the Creator, and contributed to the idolatrous practice of believing that Almighty God may be approached through intermediaries.  In order to guard against these falsehoods, the Prophet Muhammad always emphasized that he was only a human-being with the mission of preaching and obeying God's message.  He taught Muslims to refer to him as “the Messenger of God and His Slave”.  Through his life and teachings, God made Muhammad the perfect example for all people - he was the exemplary prophet, statesman, military leader, ruler, teacher, neighbor, husband, father and friend.  Unlike other prophets and messengers, the Prophet Muhammad lived in the full light of history, and all his sayings and acts were meticulously recorded and collected.  Muslims don't need to have mere ‘faith’ that he existed, or that his teachings are preserved - they know it to be a fact.  God took it upon Himself to protect the message revealed to Muhammad from distortion or from being forgotten or lost.  This was necessary because God promised that Muhammad was to be the final Messenger to mankind.  All of God's Messengers preached the message of Islam - i.e.  submission to the law of God and the worship of God alone – but Muhammad is the last prophet of Islam who brought the final and complete message which was never to be changed until the Last Day.

Next: Seven Common Questions about Islam (part 2 of 2)