Description: The setting of the start of the journey, and some details about the Prophet Muhammad’s early life, may the mercy and blessings of God be upon him. 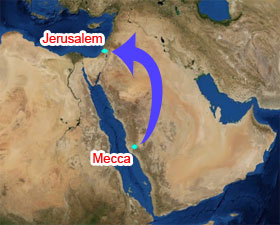 The journey of the Prophet and Messenger, Muhammad, may the mercy and blessings of God be upon him, by night from the Holy Mosque in Mecca to the farthest mosque in Jerusalem was a miracle granted to Him by God.  It is the first part of a night of wonder and amazement, culminating in Prophet Muhammad’s ascension through the heavens and into the presence of God.

“Glorified be He Who took His slave on a journey by night from Al-Masjid-al-Haram[1]  to the Masjid-al-Aqsa[2], the neighborhood whereof We have blessed, in order that We might show him of Our signs[3].  Verily, He is the All-Hearer, the All-Seer.” (Quran 17:1)

It was a physical journey  and all the events about to be described took place in one night.

This series of articles will use the word masjid instead of its English translation, mosque.  The reason for this is that the word masjid implies much more than the recognisable building where Muslims pray.  The word masjid comes from the root “sa-ja-da” meaning to prostrate, therefore a masjid is any place of prostration.  The Prophet Muhammad told us “this earth was made a Masjid for me.”[4]  This gift from God was given only to the nation of Muhammad.

A Muslim can pray in any place that is not impure (with a few exceptions).  There are buildings specifically for prayer, but any place a Muslim prays is a masjid, in the literal sense – a place of prostration.  The act of prostration is the most honourable part of the prayer.  When a Muslim’s forehead touches the ground, he or she is very close to God.  Prayer establishes the connection between the believer and his Lord, and it was on this miraculous night that the five daily prayers were instated.

In the story to follow you will learn some more about this man called Muhammad and come to understand a little about why Muslims love him.  You will also discover why Masjid al-Aqsa in Jerusalem is one of the three Holy Masjids in Islam.  God refers to Jerusalem in the Quran as “the neighbourhood we have blessed”.  The Dome of the Rock, part of the precinct of Masjid al-Aqsa, is the most recognizable symbol of Jerusalem and holds a special place in the hearts of every Muslim.  On this journey we are about to undertake you will learn why.  So let us travel back through time, to 7th century Arabia, to the city of Mecca and accompany Prophet Muhammad on his night journey and ascension.

Approximately ten years after Prophet Muhammad received the first revelations of the Quran, he suffered two grave losses.  One was the death of his uncle Abu Talib, the man who had supported and loved him from the time he was a young orphan, and then only two months later, Muhammad’s beloved wife, Khadijah, died.  This year became known as the Year of Sorrow.

In the years leading up to these sad events, the new Muslims, especially Prophet Muhammad, were persecuted, ridiculed and abused.  The strength and loyalty of his uncle combined with the love and compassion shown to him by Khadijah helped him to remain strong and continue spreading the message in the face of grave adversity.  However, he now felt alone and extremely overwhelmed by his sadness.

When one has truly surrendered to God, the pains and sorrows of this life form part of a test of faith, and these tests are always followed by relief.  In chapter 94 of the Quran, called Solace, God assures Prophet Muhammad that with every hardship comes relief, and He repeats it a second time with emphasis - with every hardship comes relief.  After this extremely difficult year, Prophet Muhammad felt his relief in the form of a major blessing, the Night Journey and Ascension.

Even though it was dangerous and he risked attack by the Pagans of Mecca, Prophet Muhammad often spent the night in prayer at the Holy Masjid in Mecca.  On this particular night, he was lying close to the Ka’ba (the black cube in the middle of the Masjid) in a state between wakefulness and sleep.  An angel came and cut open his chest from the throat to the below the stomach.  The angel removed Prophet Muhammad’s heart and placed it in a golden bowl filled with faith, the heart was purified, filled and returned to its place.[5]

This was not the first time that an angel had come down and extracted Muhammad’s heart.  As a small child, Muhammad lived in the deserts of Arabia with a foster family according to custom, for the desert environment was known to be much healthier and more suitable for proper cultivation than the cities.  When he was four or five years old and playing in this wilderness with his young friends, the Angel Gabriel appeared, removed Muhammad’s heart and extracted from it a portion, referring to it as “a part of Satan”.  The Angel Gabriel washed the heart with the water of zamzam (the well of Mecca which sprung to quench the thirst of Ishmael) and returned it to its place.  The other children ran away screaming, thinking Muhammad was being murdered, but by the time they returned with help, he was alone, scared and white, but with only a small mark from the ordeal.[6]

Prophet Muhammad’s mission was to guide all of humanity to the worship of the One True God, thus every aspect of his life formed part of God’s plan to prepare him for this great responsibility.  As a child, the part of Satan was removed from his heart, and as an adult, about to undertake the building of the Muslim nation, his heart was purified and filled with pure faith.  The next part of this miraculous night then commenced.

Prophet Muhammad was presented with a white animal he described as being smaller than a horse but larger than a donkey, it was known as al-Buraq.  This animal, he said, could take a stride as far as it could see.  With one leap, al Buraq could cover an incredibly vast distance.[7]  The Angel Gabriel told Prophet Muhammad to mount the animal, and together they travelled more than 1200 km. to the furthest masjid – Masjid al-Aqsa.

Prophet Muhammad was on the back of al-Buraq while the animal’s stride reached towards the horizon, and the stars glittered in the night sky over the deserts of Arabia and beyond.  He must have felt the wind on his face and been aware of his newly filled heart thumping in his chest.  Imagine what signs and wonders of God Prophet Muhammad must have seen on that miraculous journey by night!

[1] The holy mosque in the sanctuary of Mecca

[2] The furthest mosque in Jerusalem

Next: The Night Journey and the Ascension (part 2 of 6): Masjid Al-Aqsa

I like so so much in your website about phophet Mohammed the nigth Journey and Ascension about mosque of of Islam. thanks so much. The Evidence of Islam. Salamanikum salam