The Authorship of the Quran (part 3 of 3): Was it the Words of Satan or God?

Description: The theory that the Quran was a Satanic inspiration, and a conclusion to the subject of authorship.

Quranic Teachings about Satan and about Morality 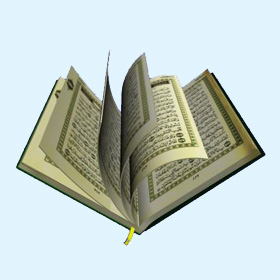 Some claim that the Quran was the work of the devil.[1]  Let us examine how much sense (or non-sense) this allegation makes.

How could Satan so vehemently condemn himself?  Is it really acceptable to common sense to hold the view that Satan would ask people to do good, to be moral and virtuous, to worship none but God, to not follow Satan or his whispers, and to avoid and struggle against evil?

To hold such a view is clearly repugnant to reason, as Satan has only undermined himself through this means if he is the author.  Even the Bible attests:

This argument applies to any “Satanic forces”, be they “evil spirits”, “deceitful aliens”, etc.

Within the Quran are recorded facts about ancient times that were unknown to Muhammad’s contemporaries and even to historians in the first half of the 20th century.  In scores of verses, we also find references to scientific wonders, some only recently discovered or confirmed, regarding the universe, biology, embryology, astronomy, physics, geography, meteorology, medicine, history, oceanography, etc.  Below are some examples of modern scientific discoveries mentioned in the Quran.

Readers who are interested in further examples, are referred to “The Bible, the Quran and Science” by Maurice Bucaille[3], “Struggling to Surrender” p.33-38, by Jeffery Lang[4], “The Quranic Phenomenon” by Malik Bennabi[5], “The Developing Human”, 3rd edition, by Keith L. Moore[6], “A Brief Illustrated Guide to Understanding Islam”, by I. A. Ibrahim[7], “The Sources of the Quran” by Hamza Mustapha Njozi[8], “The Basis of Muslim Beliefs”[9]  and “The Amazing Quran” by Gary Miller[10], etc.

How many well trained modern scientists and geniuses with the aid of hi-tech equipment, satellites, telescopes, microscopes and computers were required to discover the scientific facts mentioned in the Quran, and over what time span?  Is it even conceivable that any human being over 1,400 years ago could have produced a scripture with such information in it, let alone a person who had never been educated?

Although the inability of man to encompass all the mysteries and complexity of creation is mentioned in the Quran (67:3-4), the revelation nevertheless seems to point to various natural phenomena as if urging human beings to enquire and verify what is said – again, with such an attitude of confidence that one can only assume the author is indeed challenging our disbelief.  To be generous to the skeptic, perhaps one or two of the scientific revelations were the result of nothing more than a good guess or coincidence, but how probable could it have been that they all were?

Comparing Quranic statements that deal with the physical universe with certain scientific notions leads us to discover profound similarities.  But, more notably, as Dr. Maurice Bucaille observes, the Quran is distinguished from all other works of antiquity that describe or attempt to explain the workings of nature in that it avoids mistaken concepts.  For in the Quran, many subjects are referred to that have a bearing on modern knowledge without a single statement contradicting what has been established by present-day science.[11]

Dr. Bucaille goes as far as to conclude his study with the following remark:

“In view of the level of knowledge in Muhammad’s day, it is inconceivable that many statements in the Quran which are connected with science could have been the work of a man.  It is, moreover, perfectly legitimate, not only to regard the Quran as an expression of Revelation, but also to award it a very special place, on account of the guarantee of authenticity it provides and the presence in it of scientific statements which, when studied today, appear as a challenge to explanation in human terms.”[12]

In examining the possible source of the Quran we have covered the following points:

·        Discrepancies between the Quran and the Bible

·        Quranic teachings about Satan and about morality, and

These points were presented to aid us in our “elimination process” of unacceptable sources or authors of the Quran, as follows:

Muhammad : We might start by eliminating Muhammad  from the list of possible authors of the Quran.  There is just no way that he could have authored the Quran in view of points 1, 2, 3, 5 and 6 presented above.

Other Arab Poet(s), Scholar(s), etc.: We can also eliminate any other Arab from the list of possible authors in view of points 2, 3 and 6 (at least).

Some non-Arab: The reasons for the elimination of any Arab from the list also eliminate any non-Arab scholar, poet or religious personality.

Christian Monks or Jewish Rabbis (i.e. Judeo-Christian sources): This alternative source of the Quran is unreasonable in view of points 1, 2, 3, 4 and 6.

Satan (or other deceitful spirits or aliens, or anyone on his side, etc.): This option is also unacceptable in view of the points discussed, especially under 5.

God: In the absence of any more acceptable alternative as source and author of the Quran, one is more or less forced by reason to accept the Quran for what it claims to be – revelation from God through His Prophet Muhammad.  This position seems reasonable not just because it is the only option that cannot be objectively eliminated, but because it is only reasonable to expect that a book with such qualities and contents would come from man’s Creator and Guide.  Of all the possible sources of the Quran, it is only the last alternative – God – who even claims in the Quran itself to be the author of the scripture, for the Quran is truly the spoken word of God.

The position, therefore, which holds that God is the author and source of the Quran still stands, and the challenge (or falsification test, Q.4:82) remains open to anyone to disprove the Quran’s claim to being revelation from God.  Having undertaken this task ourselves, the Muslim’s contention that the Quran is the Word of God appears not just a product of blind faith but, in fact, a product of very sound and reasoned judgment in light of all the available evidence.  Indeed, after having assessed the evidence, it would be blind faith to contend otherwise!

[2] Cited in H.M. Njozi, The Sources of the Quran: A Critical Review of the Authorship Theories, Saudi Arabia: WAMY Publications, 1991, p.96

[8] H.M. Njozi, The Sources of the Quran: A Critical Review of the Authorship Theories, Saudi Arabia: WAMY Publications, 1991

Previous: The Authorship of the Quran (part 2 of 3): The Words of a Poet or a Teacher?