Description: The Ark comes to rest and Noah’s people are utterly destroyed. 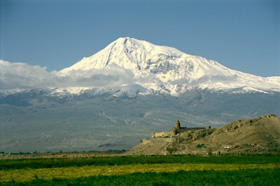 “Embark therein; in the Name of God will be its course and its anchorage.  Surely, my Lord is Oft Forgiving, most Merciful.  So it sailed with them amidst waves like mountains...” (Quran 11:41)

Noah had built the ark according to God’s instructions, from planks and nails, and it kept the believers safe from the deluge of rain and from the water gushing out of the earth.  Then the earth’s interior moved in unusual ways, and the bottom of the oceans rose in sudden bursts causing waves to flood the earth.  These waves, as big as mountains, submerged everything; they lifted up the ark, making it appear as fragile as a matchbox tossed in the ocean.  This construction, made of wood, became a ship of safety and security, for its passengers had true belief and trust in God.

From his secure place on the ark, Noah could see one of his sons overwhelmed by the water.  Noah cried out to his son, imploring him to come aboard the ark and to leave the non-believers to their fate.  The son, however, was thinking in terms of this world, and not with heartfelt trust in God.  He replied that he would take himself to a mountain, never imagining that waves could swallow a mountain.  Noah pleaded with his son saying “nothing can save you on this day except the mercy of God”.  The son refused, and  he drowned.

“And Noah called out to his son, who had separated himself (apart), ‘O my son!  Embark with us and be not with the disbelievers.’  The son replied, ‘I will betake myself to a mountain; it will save me from the water.’  Noah said: ‘This day there is no saviour from the Decree of God except him on whom He has mercy.’  And a wave came in between them so he (the son) was among the drowned.” (Quran 11:42-43)

“‘O Earth!  Swallow up your water, and O sky!  Withhold (your rain).’  The water was diminished (made to subside) and the Decree (of God) was fulfilled (the destruction of the people of Noah).  And it (the ship) rested on Mount Judi, and it was said: ‘Away with the people who are wrongdoing.’” (Quran 11:44)

Unlike Christian and Jewish traditions Islam, does not mention Noah sending a bird (neither a dove nor raven) to search for dry land. Rather, at God’s command, the rain stopped and the water ceased to gush from all the cracks in the earth.  Calm returned and the sun began to shine.  The flood had cleansed the earth of idolatry and disbelievers.  Not a single person who had disbelieved in God remained on the earth.  The earth swallowed up the water and the ark rested upon Mt. Judi (what is believed to be in present day Turkey).

Noah was a Prophet and leader of men, but he was also a father.  He turned to God with sadness and cried,

“O my Lord!  Verily my son is of my family!  And certainly your promise is true and you are the Most Just of the judges.” (Quran 11:45)

Noah remembered that God had promised to save his family.  Noah did not doubt the word or promises of God, but he wanted to understand.  Thus God taught Noah a lesson.

As human beings we use words to mean certain things, but God can often give them new, more comprehensive meanings.  For instance, the word prayer originally meant making supplication to God, but Islam came and gave it new meaning – it became the ritual prayer preformed five times a day.  When we use the word family, we think of blood ties and relationships, and Noah was imploring God that his son was of his family.  God told Noah that his son was definitely not part of his family because he was unrighteous.  True family are the righteous believers in God.

“He said: ‘Oh Noah!  Surely, he is not of your family; verily, his work is unrighteous, so ask not of Me that of which you have no knowledge!  I admonish you, lest you be one of the ignorants.’” (Quran 11:46)

“O my Lord!  I seek refuge with You from asking from You that of which I have no knowledge.  And unless You forgive me and have Mercy on me, I would indeed be one of the losers.” (Quran 11:47)

Noah released the animals, the birds and the insects and they scattered over the earth.  Noah and his family (the believers) disembarked, whereupon Noah touched his head to the ground in prostration.  At this point the Quran and the narrations of Prophet Muhammad leave the story of Noah.  We do not know how his affairs with his people continued, nor do we know what happened to his family.  All we can ascertain is that on his death bed Noah drew his sons close to him and called on them to worship One God: The Creator and Sustianer of the Universe.

“When the death of the Messenger of God, Noah, approached, he admonished his sons: ‘Indeed I would give you far reaching advice, commanding you to do two things, and warning you against doing two things as well.  I charge you to believe that there is no god but God and that if the seven heavens and the seven earths were put on one side of a scale and the words “there is no god but God” were put on the other, the latter would outweigh the former.  I warn you against associating partners with God and against pride.” (Sahih al Bukhari)

Most of Noah's people rejected his message, but the message survives in the hearts and minds of Muslims to this day. The comforting words, and the hopes of salvation Noah conveyed to his sons while on his death bed, remain part of a Muslim's belief and confirm his attitude towards God.  For the Prophet Muhammad, may the mercy and blessings of God be upon him, also told us that God undertakes a covenant with the believers: If we do not worship other gods beside God, then He will not refuse us heaven.

Previous: The Story of Noah (part 2 of 3): Noah Builds the Ark

You and your Organization are doing a wonderful job by enhancing knowledge of people at large through your website.

May Allah reward you for this keep up the good work i really enjoyed it!

Absolutely fascinating. I love the way you tell your stories. Keep up the amazing work. Jazakum allah