Description: Satan’s deception of Adam and Eve in Heaven and some lessons we can learn from it. 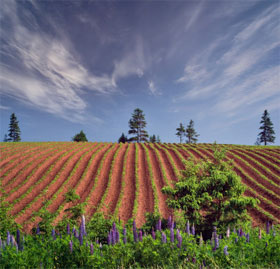 Islam rejects the Christian concept of original sin and the notion that all humans are born sinners due to the actions of Adam.  God says in the Quran:

Every human being is responsible for his or her actions and is born pure and free from sin.  Adam and Eve committed a mistake, they repented sincerely and God in His infinite wisdom forgave them.

“Then they both ate of that tree, and so their private parts appeared to them, and they began to stick on themselves the leaves from Paradise for their covering.  Thus did Adam disobey his Lord, so he went astray.  Then his Lord chose him, and turned to him with forgiveness and gave him guidance.” (Quran 20:121-122)

Mankind has a long history of committing mistakes and forgetting.  Even so, how was it possible for Adam to have committed such a mistake?  The reality was that Adam did not have any experience with the whisperings and ploys of Satan.  Adam had seen the arrogance of Satan when he refused to follow the commands of God; he knew that Satan was his enemy but had no familiarity with how to resist Satan’s tricks and schemes.  The Prophet Muhammad told us:

“Knowing something is not the same as seeing it.” (Saheeh Muslim)

God tested Adam so that he could learn and gain experience.  In this way God prepared Adam for his role on earth as a caretaker and a Prophet of God.  From this experience, Adam learned the great lesson that Satan is cunning, ungrateful and the avowed enemy of mankind.  Adam, Eve and their descendants learned that Satan caused their expulsion from heaven.  Obedience to God and enmity towards Satan is the only path back to Heaven.

“Get you down (upon the earth), all of you together, from Paradise, some of you are an enemy to some others.  Then, if there comes to you guidance from Me, whoever follows My Guidance shall neither go astray, nor fall into distress and misery.” (Quran 20:123)

The Quran tells us that Adam subsequently received from his Lord some words; a supplication to pray, which invoked God’s forgiveness.  This supplication is very beautiful and can be used when asking for God’s pardon of your sins.

“Our Lord!  We have wronged ourselves.  If you forgive us not and bestow not upon us Your Mercy, we shall certainly be of the losers.” (Quran 7:23)

Mankind continues to commit mistakes and wrong doing, and through them  we only harm ourselves.  Our sins and mistakes have not harmed, nor will it harm God.  If God does not forgive us and have mercy on us, it is we who will surely be among the losers.  We need God!

“‘On earth will be a dwelling place for you and an enjoyment, for a time.’  He said: ‘Therein you shall live and therein you shall die, and from it you shall be brought out (resurrected).’” (Quran 7:24–25)

Adam and Eve left heaven and descended upon earth.  Their descent was not one of degradation; rather it was dignified.  In the English language we are familiar with things being either singular or plural; this is not the case for Arabic.  In the Arabic language there is singular, then an extra grammatical number category denoting two.  Plural is used for three and more.

When God said: “Get you down, all of you” He used the word for plural indicating that he was not speaking to Adam and Eve alone but that He was referring to Adam, his wife  and his descendants – mankind.  We, the descendants of Adam, do not belong to this earth; we are here for a temporary time, as is indicated by the words: “for a time.”  We belong to the hereafter and are destined to take our place in either Heaven or Hell.

The Freedom to Choose

This experience was an essential lesson and demonstrated free will.  If Adam and Eve were to live on earth, they needed to be aware of the tricks and schemes of Satan, they also needed to understand the dire consequences of sin, and the infinite Mercy and Forgiveness of God.  God knew that Adam and Eve would eat from the tree.  He knew that Satan would strip away their innocence.

It is important to understand that, although God knows the outcome of events before they happen and allows them, he does not force things to happen.  Adam had free will and bore the consequences of his deeds.  Mankind has free will and thus is free to disobey God; but there are consequences.  God praises those who obey his commands and promises them great reward, and He condemns those who disobey him and warns them against doing so.[1]

Where Adam and Eve descended

There are many reports on the subject of where on earth Adam and Eve descended, although none of them come from the Quran or Sunnah.  We thus understand that the location of their descent is something that is of no importance, and there is no benefit in this knowledge were we to have it.

We do know however that Adam and Eve descended to earth on a Friday.  In a tradition narrated to inform us of the importance of Fridays, the Prophet Muhammad, may the mercy and blessings of God be upon him, said:

“The best of days on which the sun has risen is Friday.  One this day Adam was created, and on this day he was descended to earth.” (Saheeh Al-Bukhari)

Mashallah Great article! I enjoy reading about the prophets (peace be upon them)