Description: The relationship between inner faith and good works in Islam. Part Three: The false notion that one “earns” Heaven merely through inner belief and good deeds. 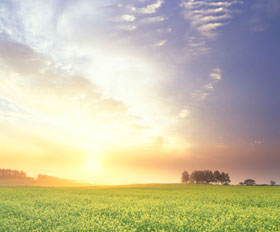 Some people may think that Islam teaches that Paradise can be earned by one’s own deeds.  This is not true; the Islamic belief is that neither faith nor works are what enter us into Heaven.  Rather, it is only God’s Grace and His Mercy which allows us to enter Paradise.  To believe otherwise is to question God’s Power and Absolute Sovereignty.  God is The Forgiver, and to claim that man can grant himself forgiveness is to take away from God’s Names and Attributes; this would be exalting the creation (i.e. oneself) to the status of the Creator, making oneself a partner in God’s Glory and Power, which is the heinous sin of shirk, i.e. associating partners in worship to God.

A house in this worldly life costs a certain price; the better and larger it is, the more its price.  A mansion costs more than a regular sized house, and a palace costs more than a mansion.  One can only imagine how much a palace in Paradise costs!  If deeds were our currency, then the truth is that none of us could save up enough good deeds to ever be able to afford even one square inch of property in Paradise.  One of the reasons that we human beings could never save up enough good deeds is that we are so heavily in debt already.  No amount of good deeds could repay God Almighty back for what He has given us, such as our eyesight, our hearing, and the like.  Therefore, the conclusion is that no human being can earn Paradise on his own merit or deeds.

Nobody will attain eternal Salvation due to his own level of faith or deeds, but rather, it is only attained through God’s Grace.  Prophet Muhammad, may God raise his name, said:

“…Be aware that none among you can attain Salvation only by virtue of his own deeds.”

The people asked him: “O God’s Messenger, not even you?”

To which, the Prophet replied: “Not even me, unless God encompasses me with His Mercy and Grace.”

It is known that the most righteous from humanity was Prophet Muhammad, yet we find that even he would only enter Paradise due to God’s Grace.  This becomes even clearer in another Prophetic Saying (hadeeth) in which we are told of the man who did good deeds his entire life and then thinks he will enter into Paradise on this basis, without the Grace of God.  Such a person—who is arrogant enough to think that his own deeds will earn him Paradise—will be thrown into Hell, because He disbelieved in God’s Grace.

Yet, this is not to diminish the importance of faith and works.  Muslims believe that God Almighty grants His Grace and Mercy to those who have faith and who do good works.  God Almighty says:

“And He (God) answers those who believe and do good works, and gives them more out of His Grace.” (Quran 42:26)

God Almighty tells us that His Grace, Mercy, and Love are for those who “believe” and do “good works”:

“Upon those who believed and did good works shall The Most Gracious [God] bestow [His] Love.” (Quran 19:96)

Muslims believe that God loves the good doers and that He hates the wicked.  This is in contrast to what some Christians say, i.e. that God loves everyone, including the evil, the wicked, and the sinners.  Yet, this idea is rejected even in the Bible:

“How oft is the candle of the wicked put out?  And how often comes their destruction on them?  God distributes sorrows [to the wicked] in His anger.” (Job 21:17)

The idea that God loves every human being might be a nice fluffy neo-hippy ideal, but it is nonsensical and it is not supported by God’s Message.  Christians, too, believe that God created Hell, and that some humans will be sent there.  Does God love those whom He Himself damns to Hell?  If this is the case, then what sort of love is this?  If God truly hates the sin and not the sinner, then why is it that it is the sinner—not the sin—who is thrown into Hell?

Surely, God does not love the wicked.  What kind of a God would love Adolf Hitler, Stalin, the Pharaoh, and so many other evil oppressors?  Nay, God does not love murderers, rapists, and criminals.  To believe that God would love the wicked is to question the Justice of God.  Rather, we say that God only loves the good, and He hates the wicked.  Yet, God’s Attribute is that He is Most Merciful, so if the wicked turn to Him in sincere repentance, then God is quick to accept.

To conclude the matter, whoever is loved by God will enter the Abode of Heaven, and God bestows His Love and Grace upon the good doers, those who believe with true sincerity and who do works of righteousness.  God bestows His Grace only upon those who strive to attain it.  How can anyone hope to attain God’s Grace without working with one’s own two hands to obey God’s Commandments?