Description: The relationship between inner faith and good works in Islam. Part Two: The role of speech and works in relation to faith and love.

The Statement of the Tongue 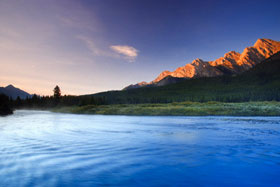 One must publicly declare faith to God.  Even Satan had belief in his heart, but he did not declare his pledge of loyalty to God, but rather he declared himself in rebellion and opposition.  Therefore, a Muslim must declare that “there is none worthy of worship except God” and must believe in all of the Prophets of God who taught this message.

Ibn Taimiyyah stated in The Book of Faith:

“Therefore, the outward speech is an essential aspect of Faith, and according to the earlier and later scholars, one will not be saved unless he verbally testifies… he, who does not make the confession of faith although he has the ability to do so, is a disbeliever.  He is a disbeliever both inwardly and outwardly.” (Kitab al-Iman)

The Importance of Deeds

Belief in the heart results in good works.  How could it be that a person would say he believes in the heart but never does good works?  The great scholar Ibn Taimiyyah said:

“And that is because Faith’s root is what is in the heart and the outer deeds are inevitable due to that.  It is inconceivable that there would exist Faith in the heart yet there be no [good] works from the limbs [as a consequence].  Rather, when the outer deeds diminish it is due to the diminishing of the belief which is in the heart… Since works are correlated to the heart, then surely it is desired that a man is not contented by the heart’s belief; rather, the righteous works are definitely with it.” (al-Fatâwâ, 7/198)

Islam teaches that there is no dichotomy between belief and works.  Rather, belief and works compliment each other and are intertwined.  The person who claims to believe—and does not show it with works—is a hypocrite.

If a man loves his wife in his heart, then he will treat her well with his actions.  If a man neglects and abuses his wife, then surely he does not truly love her.  Love manifests itself in works.  If a man loves his wife, then he will do what pleases her.  If a man truly loves God, he would show it in his obedience to God’s Commandments.  Such a person would know to do good deeds to earn God’s Pleasure.  He would strive through his works to seek the Pleasure of God, and that is the Path to Salvation.

True faith means having hope in and dependence on God’s Promise.  God Almighty says in the Quran:

“Have total dependence on the Living One, Who will never die, and glorify His praises.” (Quran 25:58)

There is a difference between true hope in God and mere wishful thinking.  Ibn al-Qayyim (2/27-28) explained:

“The difference between mere wishful thinking and true hope is that mere wishful thinking involves laziness wherein the person neither exerts himself, nor strives [to achieve what he wishes for].  Hope and trust in God, however, entails striving, exertion, and beautiful reliance [on God].  The first [mere wishful thinking] is like the one who wishes that the earth would plant and sow its own seeds for him. The second [hope in God] is like the one who [actually] tills the soil, plants the seeds and then hopes that crops will grow… Hope is not correct, except if accompanied by action.”

“And Hope is of three types; two are praiseworthy and one type is blameworthy and mere delusion. The first two are:  (1) the hope of a person who does an act of obedience for God, upon guidance from God, hoping in its reward; (2) someone who commits a sin, then repents from it, hoping for God’s forgiveness, pardon, kindness, magnanimity, clemency and generosity. (3)  The third [type] is like a person who persists in sinning and transgressing the limits, yet hopes for God’s mercy without doing any action [to warrant it]. This is delusion, mere wishful thinking and false hope.”

We must love God.  But we must not only love God with our hearts, but love God with our actions.  If we pray throughout the night, then this will instill in our hearts the remembrance of God; from this, we see that an action (such as prayer) can reinforce our inner belief.  On the other hand, sinful actions decrease faith.  If a man spends the night in illegal fornication, this will affect his heart and decrease him in faith.  Good action fortifies the heart’s belief, whereas evil action corrupts the heart.

The truth of the matter is that those who claim to love God—yet have no works to prove this—neither have belief in their hearts, nor have conviction in their tongues, nor do their actions reflect anything but the emptiness of their hearts.  We find that many people of some faiths make ostentatious claims about their supposed love for God, yet they do not back it up with their deeds.  A Muslim must recite the Declaration of Faith, or shahadah, as it is known in Arabic.  The word literally means “to witness”, and it means to be a witness that there is nothing worthy of worship except God.  Yet, witnessing with one’s tongue is an easy matter; it is a much greater sign of belief to witness God’s Glory with one’s body, actions, and even life.  This is why the word shaheed (the one who physically gives his life to God) comes from the same root as shahadah (Declaration of Faith), because the most excellent way to declare God’s Glory is with one’s actions and not just by one’s tongue.

It is a matter of common sense: a son telling his father that he loves him is one thing, but if he offers him his own kidney, then this is a higher level of love.  A man may say he loves his country, but it is a higher level for a man to risk his life in the army defending his country.  It may sound cliché, but it is a truism that actions speak louder than words.  Oftentimes we find that some adherents to certain faiths are busy telling us how much they love God, but they do not know that we Muslims are too occupied showing how we love God!  We show our love to God five times a day, when we bow to Him in prayer, and when we adhere to God’s Commands.  Moreover, Muslims are too humble and shy to claim that our love for God is so strong that we are promised Paradise!  Who is superior: the person who continually boasts his love for God, or the one who humbly manifests it in his works, toiling away to please His Lord Most High?

In the Quran, God Almighty commanded the Prophet to tell those who claim to love God to back it up with their works in obedience:

“Say: If you indeed love Allah, then follow me!  Then God will love you and forgive you for your sins, for God is Oft-Forgiving, Most Merciful.” (Quran 3:31)

This is a challenge from God Almighty, whereby He tells us that if we truly love God, then we should obey God’s commandments to prove it.  If, however, we defy God’s laws, then  we do not really love God, and this is insincerity and mere hypocrisy .