Description: The five republics of Central Asia, and their historical connection to Islam. 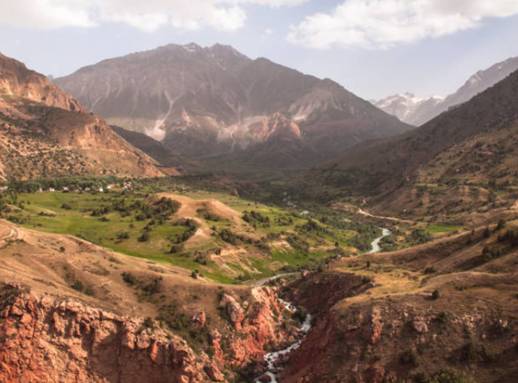 In modern terms, Central Asia comprises of five republics, Kazakhstan, Uzbekistan, Turkmenistan, Tajikistan, and Kyrgyzstan. It is bordered by the Caspian Sea to the west, China to the east, Iran, Afghanistan, and Pakistan to the south, and Russia to the north. Sometimes the Chinese autonomous region of Xinjiang and Afghanistan are included in definitions of Central Asia, but their inclusion fails to take into account the shared history and culture of the five republics. This region is historically connected to the nomadic people who lived and thrived in the area where goods and people crisscrossed across EurasiaHowever, today little is known or understood about this unique region of the world for a number of reasons including the demise of the Silk Road and the waxing and waning of their connection to Islam.

Geographically these republics can be divided into three zones. The oasis belt, sometimes called Transoxiana, mainly in Uzbekistan, but also encompassing areas of all the other states; the steppe-desert zone in Kazakhstan and Turkmenistan; and the high mountain zone in the southeast of Tajikistan. Islam entered these three regions at different times and in different waysThe ethnic heritage of the three areas was diverse, and it influenced the way they responded to Islam.

At the time of Prophet Muhammad, may the mercy and blessings of God be upon him, around 600 CE, the population of the oasis belt were of Iranian and Turkic origin. The well-traveled Silk Road meant that there were flourishing urban areas such as Merv, Samarkand, and Bukhara. Several different religions thrived there, including Zoroastrianism, Buddhism, and Manichaeism. Other religions in smaller numbers included Nestorian Christians and Jews, and in the area now known as Turkmenistan, there were Hellenistic cults.

The area was no stranger to new religions, and Islam entered Central Asia in the 8th century CE as part of the Muslim expansion and conquest of the region. In 651–652 CE, Muslims conquered the area known as Khorasan, a vast territory that now spans north-eastern Iran, southern Turkmenistan, and northern Afghanistan. The Muslims retained the name Khorasan, and in 705 CE Qutaybah ibn Muslim, the Abbasid governor, established his principal seat at Merv from where he repeatedly undertook campaigns into the Ferghana Valley

The Battle of Talas, near the border of present-day Kazakhstan and Kyrgyzstan took place in July 751 CE between the Abbasid Caliphate and the Tibetan Empire, against the Chinese Tang dynasty. This encounter resulted in Muslim control over the area for the next 400 years. After the Karluks, a Turkish tribal confederacy originally fighting with the Tang dynasty, defected to the Abbasids, the balance of power was tipped in the Muslim’s favor. Thus, by the beginning of the 9th century CE, the oasis belt had been completely integrated into the Muslim world, and Caliph Ma’mun made Merv, rather than Baghdad, his capital from 813 to 817 CE.

The cities of Samarkand, Bukhara, and Urgench, located still in what is now known as Uzbekistan, and Merv, an oasis city that no longer exists but was located near the city of Mary in Turkmenistan, flourished as centres of Islamic learning, culture, and art until the Mongol invasion of the 13th Century CE. Scholars from Central Asia traveled throughout the Muslim world and made significant contributions to medicine and science, and Islamic jurisprudence and studies. Many are still known and respected today. They include the astronomer al-Farghani, the notable mathematician al-Khwarizmi (latinized to Algorithmi), and Ibn Sina (Avicenna)Ibn Sina is regarded as a most significant physician, astronomer, thinker, and writer, and the father of modern medicine Also, from Central Asia were hadith collectors, Imam Bukhari, who compiled the most well-known book of hadith, and Imam Tirmidhi, whose family was from the city of Merv.

In the 12th and 13th centuries CE, Merv became one of the largest cities of the world, with a population of up to 500,000 people. However, in 1221 the Mongol horde swept into the city totally destroying it. Historical accounts suggest that the entire population of one million people, including refugees seeking protection, were killed. When Genghis Khan died six years later, he left an empire that extended from northeast China to the Caspian Sea measuring 28 million square kilometers. While Merv never fully recovered, Islam not only survived the savage conquest but recovered and spread throughout the empire.

The first Mongol Khan to embrace is Islam was Baraka (Berke) Khan, the grandson of Genghis Khan. He is said to have met a caravan coming from Bukhara, question the travelers about their religion and subsequently accept Islam. From there Islam spread once again claiming the territory previously lost to the Mongol hordes. His descendant Tamerlane consolidated Islam in the area. Those who had tried to destroy Islam, through the grace of God, became its protectors.

However, by the 16th century CE, Central Asia was becoming increasingly isolated from the rest of the Muslim world. Although the area had no distinct borders, it contained several main routes of the Silk Road, allowing the transfer of good and ideas. However, when alternate trade routes were established, including faster sea routes between India, China, and Europe, the region became unstable; many clan-based tribes rose and fell across the region until the 19th Century CE.

The Russian Tsarist Empire turned its attention to Central Asia in the 17th century CE, and in the 19th century CE, London and St. Petersburg hustled each other over Central Asia in what was known as the Great Game. Russian expansion continued until the last independent Uzbek regions were annexed or became protectorates in the 1870s. What is now Northern Kazakhstan was the first area brought under Russian control, and by the middle of the century, the Russians were poised to take control of the oasis belt; there the subjugation was completed within a decade.

In the steppe region, Tsarist Russia showed support and goodwill towards Islam and Muslims. They allocated funds for printing Muslim literature and building mosques. The nomads of the steppes had previously possessed few mosques. The Muslims from the oasis belt were encouraged to train and instruct the nomads in more orthodox Islam. The Kazakh nomads perceived this ‘new’ form of Islam to be narrowly dogmatic and unfamiliar in Kazakh traditional Islam that had been modified by local customs and beliefs. By the mid-19th century CE, Tsarist policies were changing. They started sending Christian missionaries into the steppe region, and in the oasis belt measures were introduced to curb Islamic activities.

Following the Russian revolution of 1917–1922 CE, Central Asia became part of the Union of Soviet Socialist Republics (USSR), and was organized into the five republics we know today, Kazakhstan, Uzbekistan, Turkmenistan, Tajikistan, and Kyrgyzstan. Islam was not treated kindly by the USSR despite an appeal to Russia’s Muslims in 1917 that promised, "…your beliefs and usages, your national and cultural institutions are forever free and inviolate."

In part 2 we will discuss the suppression of Islam and its post-Soviet revival.

Next: Islam in Central Asia (part 2 of 2): From revolution to Islamic revival