Description: A chapter that begins and ends by focusing on the certainty of the Day of Judgment, while the middle verses discuss Prophet Muhammad and the revelation of the Quran. 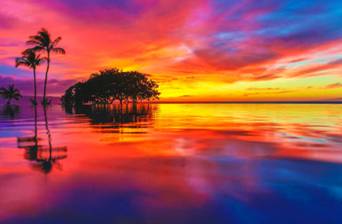 The Resurrection is a forty-verse chapter revealed in Mecca.  Most Meccan chapters deal exclusively with the fundamentals of faith, and this one concentrates particularly on the Day of Resurrection and humankind’s habit of denying its inevitability.   The name of the chapter is taken from the first verse, and it also describes the theme and subject matter.  It is believed to be one of the earliest chapters revealed, and its style indicates that the concepts and teachings were presented to the people of Mecca in brief yet forceful sentences.  This chapter predominantly addresses those who deny the Hereafter and replies to their doubts and objections.

Verses 1 – 15 The inevitability of the Day of Resurrection

The chapter begins with two short introductory sentences.  God swears by the Day of Resurrection and by the self-reproaching soul.  The Day of Resurrection is something that is inevitable; everything in this world will come to an end it is neither eternal nor everlasting.  The self-reproaching soul is what we today call the conscience.  Humankind is always questioning their actions, for example, in our minds we ask ourselves, should I have done this or that or perhaps something else.   Thus God swears by two inescapable things.  There will be a resurrection and people will always question themselves.

Do people think that God will not be able to reassemble their bones? Because He can do that easily, in fact, He can even reshape the very tips of a person’s fingers.  But alas, people want to deny what is ahead of them, a day of certainty, the Day of Resurrection and mockingly asks when this day will occur? God answers that it will come when the eyes are dazzled, and the moon darkens.  On that day the sun and the moon will be joined together, and people will ask where to find a place of refuge.  On that day there is no refuge except with God.  That is the only answer to that question.  On that fateful and inevitable day, people will be informed about their deeds, good or bad, big or small; and even bear witness against themselves.

Verses 16 – 19 Prophet Muhammad and the Quran

These next four verses give Prophet Muhammad, may the mercy and blessings of God be upon him, instructions regarding the revelation of the verses of the Quran.  He is told not to rush when trying to memorize the recitation being revealed to him.  God will most assuredly make sure you remember it.   And when it is recited to you (Prophet Muhammad) repeat it, and God will make it clear and understandable for you.  God takes total responsibility for the Quran, its revelation, its recitation, its collection, and its preservation.

People love this fleeting life and are heedless of the Hereafter.  On the Day of Judgment, some faces will be radiant and beaming, turned towards their Lord, looking at indescribable beauty.   Others, however, will look dreadful and despairing, anticipating something devastating to befall them.  Their sins and misdeeds cast a dark shadow over them.

When a person is on the verge of death, someone cries out, "Who will cure him?" The person will then understand that he is dying.  The road ahead becomes clear.  It is the final parting, from his family, friends, and all worldly possessions.  Shortly thereafter he is wrapped in his shroud and prepared for burial.   He will then be led towards his Lord, as if in a procession, along a road that every living being will eventually have to take.  Death separates a person from their loved ones and does not respond to pleading or an outpouring of grief.  It takes the most powerful as easily as it takes the weakest, and the tyrant succumbs in exactly the same manner as the one who was oppressed.   The chapter moves on from this distressing death scene, but its image remains in our consciousness.

Verses 31 – 40 Arrogant rejection and the power of God

In this life the disbeliever denies the truth, fails to pray, and then turns away, walking back to his people with arrogance and conceit.  Some people refuse to do anything other than deny the truth.  They do not fear God or prepare for the inevitable; instead, they indulge in sinful behavior not even bothering to conceal their arrogance.  Here the Quran issues a clear warning to these people.  Woe to you.  Woe is repeated four times in two short verses.  The day comes closer and closer; nearer and nearer.  It is a strong threat, more than a warning.  Keep in mind that when the time of death arrives, it cannot be altered, it cannot be moved forward or backward even by a nanosecond.

Do some people really think that they will not be returned to the Creator for judgment? Humankind will not be left to wander about without purpose.  Each person began as a drop of sperm, changed into a clinging clot (mass of cells) that God proportioned and shaped and made into one or other of the two sexes, male or female.   Just as the reader recognizes the truth of this, the chapter concludes by asking a simple question.  Knowing all this do people still think that God does not have the power to bring the dead back to life?