Description: God guides whom He wills, however, this blessing is not given arbitrarily, rather imbued with a free will there are factors that make one worthy or unworthy of it. 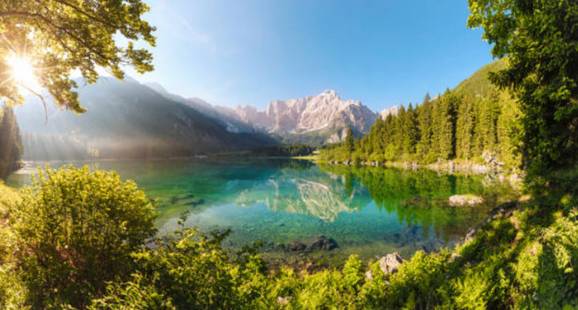 God, through His grace, mercy and generosity guides whom He wills and through His fairness doesn’t guide whom He wills. God’s guidance, as many converts to Islam will know, is brighter than the sun. One who is guided will truly get to know God, know that He is One, be at peace of mind, be connected to Him through prayer, know what the real purpose of life is and know for certain that there is a Hereafter that one must prepare for by doing good deeds. "God is the Guardian (ally) of those who believe. He brings them out from darkness into the light." (Quran 2:257)

God Has Not Left Humankind Without Guidance

God has not abandoned humankind after creating them, rather He has always shown the path that leads to Him. It is then up to the people if they want to seek and benefit from that guidance or not. "Then if there comes to you (Adam and your offspring) guidance from Me (in the form of a Prophet or Holy Book), then whoever follows My guidance he shall neither go astray, nor shall be distressed." (Quran 20:123)

"We (God) will show them Our signs in the horizons and within themselves until it becomes clear to them that it (Islamic Monotheism) is the truth." (Quran 41:53)

Acts That Make One Worthy of Guidance

There are certain acts that when performed are reasons for God to guide one to Him.

"Do you not see that the ships sail through the sea by God's grace so that He may show you some of His signs? Surely in this are signs for whoever is patient, grateful ." (Quran 31:31)

"If you are grateful, I will surely increase you [in favor]; but if you deny, indeed, My punishment is severe." (Quran 14:7)

God’s blessings cannot be counted. He created us after we were nothing and blessed us with life, sight, hearing, speech and intellect so that we may reflect and show gratitude to Him.

God appreciates truthfulness, not only with others but with one’s self too. When the Straight Path becomes apparent, one should be truthful with oneself and embrace it.

"God will say, ‘This is the Day (the Day of Judgement) when the truthful will benefit from their truthfulness.’" (Quran 5:119)

"That God may reward the truthful for their truth and punish the hypocrites if He wills or accept their repentance. Indeed, God is ever Forgiving and Merciful." (Quran 33:24)

"Wherewith God guides all those who seek His pleasure to the ways of peace, and He brings them out from darkness into the light by His Will and guides them to the Straight Way (Islamic Monotheism)." (Quran 5:16) Meaning God will guide to Him whoever truly seeks Him and His acceptance.

Acts That Make One Unworthy of Guidance

Likewise, there are characteristics and acts that do not please God and which are reasons for one not to be guided.

1. Not Believing in Him and His signs

Being obstinate in accepting the Straight Path. "Indeed, God does not guide the disbelieving people." (Quran 5:67)

Those who knowingly and willfully commit transgression and injustice. "And God does not guide the wrongdoing people." (Quran 2:258)

"And God does not guide the defiantly disobedient people." (Quran 5:108)

"God certainly does not guide whoever persists in lying and disbelief." (Quran 39:3)

"Indeed, God does not guide one who is a ‘Musrif’ (someone who is wasteful, transgresses and exceeds in the rights of others), a liar."  (Quran 40:28)

"I (God) will turn away from My signs those who are arrogant upon the earth without right; and even if they were to see every sign, they still will not believe in them. If they see the Right Path, they will not take it. But if they see a crooked path, they will follow it. This is because they denied Our signs and were heedless of them." (Quran 7:146)

"And the Day those who disbelieved are exposed to the Fire [it will be said], ‘You exhausted your pleasures during your worldly life and enjoyed them, so this Day you will be awarded the punishment of [extreme] humiliation and pain because you were arrogant upon the earth without right and because you were defiantly disobedient.’" (Quran 46:20)

Man was once nothing but a tiny embryo and has no right to be arrogant. It was arrogance and envy that lead to Satan’s downfall.

Repentance Is Open for Everybody

All people commit faults, sins and mistakes, and as long as one is still alive, it is never too late to repent sincerely to God and turn to Him. The Prophet Muhammad, may the mercy and blessings of God be upon him, said, "God is more pleased with the repentance of His slave than anyone of you is pleased with finding his camel which he had lost in the desert."[1]

"Say, [O Prophet, that God says,] ‘O My servants who have transgressed against themselves [by sinning]! Do not lose hope in God’s mercy, for God certainly forgives all sins. He is indeed the All-Forgiving, Most Merciful.’" (Quran 39:53)

“As for those who struggle in our reason, we will guide them to our paths. For God is with those who do well.”

Islam give us perfect guidense in our life.