Description: God explains one of the innate qualities of humankind, the ability to choose between right and wrong.  The fact that there are consequences for all of our choices is demonstrated through the story of the people of Thamud. 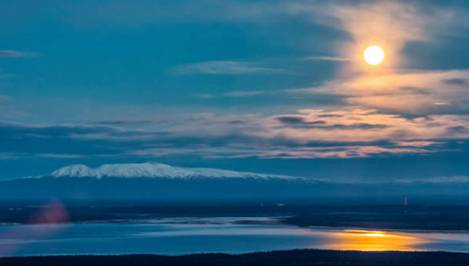 The Sun (Ash-Shams) is the ninety-first chapter in the one hundred and fourteen chapters of Quran.  Thus it is amongst the short chapters at the end of the Quran.  Here almost all the verses and chapters were revealed in Mecca, at the beginning of the prophethood of Muhammad, may the mercy and blessings of God be upon him.  In this early era the revelations were primarily concerned with the establishment of faith and laid down the foundation beliefs of Islam.  The central theme of this chapter is the choice between purifying or corrupting the soul, and the nation of Thamud is used as an example of corruption.

The title, The Sun, comes from the description of the sun in the first verse.  When this chapter is recited in the Arabic language it keeps up a rhyming musical beat throughout its fifteen verses.  These few short verses encompass a great truth, the nature of humankind and their inherent abilities to choose between right and wrong and decide their own fate.

God swears by a number of celestial phenomena.  The bright and radiant sun, the moon, the day when the sun’s splendor is revealed, and the night that descends to shroud the earth.  God swearing by these objects gives them an added significance and draws our attention to their extraordinary nature and the magnificence of the One who created them.

The oath specifies the beauty of the sun when it rises but also its effect on the earth when the day is revealed.  Our familiarity with the sun sometimes allows us to overlook this magnificent phenomenon and its beauty and function, but this oath reminds us of the daily spectacle.  The human heart has long felt a fascination with the moon and on clear moonlit nights one can feel the majesty of God in the space around us.  When night descends it is able to cover and conceal everything, the earth is quietly waiting for the splendor of the sun to reawaken it.

The Quran frequently urges humankind to ponder and reflect upon the universe.  And God continues to swear by the sky and how He constructed it and by the earth and how He spread it out.  When God swears by the construction of the sky we immediately think of the heavens above us, but we really know very little about the sky and how it was built.  Even in this scientifically advanced century we continue to wonder what keeps it together, high above us, ethereal yet somehow solid.  When God refers to the earth it reminds us that life on this planet would not have been possible if God had not incorporated the characteristics and natural laws that make all life possible.

God then swears by the soul and how He balanced and refined it giving it the knowledge of what is right for it and what is wrong for it.  Humankind is one of the most remarkable wonders because God molded and inspired each person with the knowledge of wickedness and piety, and the ability to choose one over the other.  Humankind has the innate ability to determine his or her own course of action and is thus responsible for each choice.  Those who make the right choices will be successful and those who choose to corrupt their pure soul will fail.  God, for His part, does not leave the person or soul alone wandering blindly and trying to decide what is right; He has made the message clear for anyone who seeks to benefit from it.

In these verses God uses a historical event to further explain the previous verses.  With arrogant cruelty the people of Thamud called Prophet Saleh (who was chosen by God to deliver His message) a liar and denied him.  When the most wretched person among them was sent out to hamstring the she-camel, that had been sent by God as a sign, Prophet Saleh told them not to harm her (the she-camel).  He also told them to let the she-camel drink on the days that had been assigned to her.  The people of Thamud ignored him, hamstrung the she-camel and then killed her without thinking about the consequences of their actions.  As a result of their outrageous insolence a terrible calamity befell the people of Thamud.  God destroyed them by levelling them to the ground.

God does not fear consequences for anything He does.  God is not like the kings and rulers of the world, who, when they want to take some action against a people, are compelled to consider what the consequences of their actions will be.  God’s power is supreme.  Humankind, however, should fear the consequences because the Day of Judgement is coming, and every person will answer to God for the choices he or she made.  God is not asked about what He does, but His servants will surely be asked to explain their actions.

This chapter links the human soul to the celestial phenomena we experience on a regular basis.  The sun rises, the moon comes out, the day reveals the earth in all its splendor and night time is able to cover and conceal.  It is constant and repetitive.  God’s laws that determine failure or success are also constant.  He plans wisely and sets a time for everything and a purpose for every action.