Description: The Poets discusses stories about the earlier Prophets and concludes by confirming the divine origin of the Quran.

This chapter of 227 short verses was revealed in Mecca.  Like all Meccan chapters it is primarily concerned with the Oneness of God. 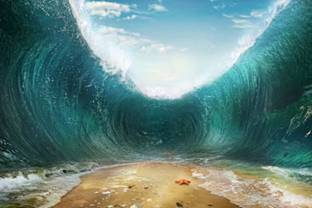 The Poets is one of twenty-nine chapters that begin with a combination of Arabic letters.  This combination is Ta Sin Mim.   God did not reveal any meaning for these letters; however, over the course of Islamic scholarship many theories have been suggested.

These verses make things clear, yet Prophet Muhammad, may the mercy and blessings of God be upon him, is worrying himself to death over people who refuse to believe.  God could have sent them a sign that was undeniable, but they turn away from every revelation.  Now the Quran has come, they will soon experience the reality of what they mock.  They need only to look around to see God’s creation; a sign that God is Mighty and Merciful.

Moses was sent to the people of Pharaoh but feared he would be rejected because of his speech.  God reassured him by making Aaron his helper.   Moses asked that the Israelites be released from bondage.  Pharaoh reminded Moses of his time in Egypt and called him ungrateful.   Moses spoke about the glory of God, and Pharaoh threatened him with prison while mocking him and God.  Moses demonstrated the miracles God allowed him to perform.  He threw his staff which became a snake and from his robes he drew his hand, shining and white.  He was called a sorcerer and Pharaoh and his advisers arranged a competition with their sorcerers.

At the assembly the sorcerers threw their ropes, but Moses’ staff devoured their illusions.  The sorcerers prostrated to God and Pharaoh had them crucified.  God inspired Moses to flee at night with all the Israelites.  Pharaoh sent an army to prevent their emigration.  By sunrise Pharaoh’s people had the Israelites trapped at the edge of the Red Sea.  Moses struck the sea with his staff and the waves parted allowing them to escape.  The pursuers were drowned.  This is a sign for those who believe.  God is Mighty and Merciful.

Abraham asked his father and his people about their idol worship.  He pointed out that idols could not benefit or harm them, but his people replied that they followed the practice of their ancestors.  Abraham denounced them all and pledged his allegiance to God, the one who guides him, sustains him, cures him and will resurrect him.  Abraham supplicated that God join him with the righteous, give him honor amongst later generations and grant him repose in the Gardens of Paradise; he also asked that his father be forgiven.  Children and wealth will not avail on that Day.  Only those who come before God with a pure heart will benefit.

Paradise will be brought close to the righteous and Hell will be visible to those who have gone astray.  They will be asked about what they worshipped apart from God and will be flung into Hell with their idols including all the armies of Iblees (Satan).  They will argue with one another and wish longingly to return to their worldly life for another chance.  This story reveals a great lesson.  God is Mighty and Merciful.

The people of Noah also rejected their Messenger.  He was gentle and mild, and asked for no payment, but they considered him and those who followed him to be poor and worthless.  Noah said he would never drive away a believer; he was nothing but a warner.  They asked him to desist or he would be stoned.  Noah called out to God asking for a decisive judgement.   God saved Noah and the believers in a ship, the others were drowned.  This is a great lesson, but most do not believe.  God is Mighty and Merciful.

The people of Ad disbelieved in their Messenger Hud.  He asked them to fear God and requested no payment.  They built strong, tall buildings as if they expected to live forever and were cruel tyrants.  Hud reminded them that God provided them with their sustenance.  Hud’s people replied that they had no fear of torment and such talk was nothing but an ancient myth.  God utterly destroyed them.  He is Mighty as well as Merciful.

The people of Thamud denied their Messenger.  When Saleh asked them to fear God they accused him of being affected by magic.  He asked for no reward and reminded them of their provisions from God, and told them to stay away from transgressors, but it was not enough, they wanted a sign.   Saleh brought forth a she-camel who was to share their water; each drinking on alternate days.  The people were warned not to hurt her, but they hamstrung her.  In the morning they were full of regret because the punishment fell upon them.  God is Mighty and Merciful.

The people of Lot also disbelieved.  He asked them for no reward and warned them to fear God.  Lot admonished them and cautioned them not to partake in unnatural acts.  They responded by threatening Lot with expulsion.  Lot asked God to save him and his family and He did; all except his wife who was destroyed with the rest.  A rain of destruction poured down on those who had been forewarned.  Another lesson the people failed to learn.  God is Mighty and Merciful.

Shuaib’s people disbelieved even though he was a trustworthy Messenger who asked for no reward.  He warned his people to weigh with correct scales, to give full measure, and not spread corruption, but they accused him of being bewitched.  They called him a liar and asked him to cause fragments of the sky to fall upon them if he was truthful.  Due to their stubborn denial the torment seized them, a scourge from the dark clouds.  Most do not learn the lesson and become believers.  God is Mighty and Merciful.

This Quran comes from God, brought down to Prophet Muhammad through the Angel Gabriel, as a warning to the people in plain Arabic language.  The former scriptures foretold this, why is that not sufficient proof? If it was revealed to a non-Arab who recited to them in Arabic they would still not believe.  God puts unbelief in the hearts of the guilty.  They will not believe until they see the torment, and at that time they will ask for respite.   Past enjoyment is no protection from the torment.  God never destroyed a population without a warner.  He is never unjust.  The jinn did not bring down the Quran.  Do not worship anything other than God.  Warn your close kin (oh Muhammad) and show kindness to the believers.  If they disobey then you are not accountable for their actions.  Put your trust in God.  The devils descend upon the liars and only the lost follow the poets; except the poets who believe and are righteous.  And the oppressors will know to what they will return.