Description: How Islam spread from Arabia, along the Silk Routes into China and Far East Asia. 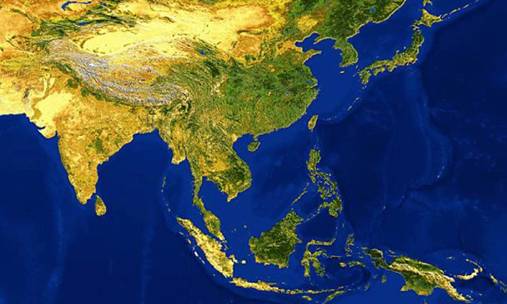 While conflict was an integral part in the spread of Islam in the Middle East this was not the case in China or Southeast Asia.  In this part of the world Islam meandered along following well-established trade routes.  It is said that the first Muslim to visit China was Sa’d ibn Abi Waqqas, who was the uncle of Prophet Muhammad, may the mercy and blessings of God be upon him.  It is thought that he arrived in Canton (Guangzhou) in 627 CE.  In 651 CE Sa’d visited China for the third time to set up an embassy.  The Tang Emperor, Gaozong, received the envoy and ordered the construction of the Memorial mosque in Canton.  Thus Canton (Guangzhou) became one of the first Muslim settlements in China.

The first Arab traders to reach China had travelled along the Southern Silk Road, a maritime route that brought an intense exchange in ideas, goods and people.  Although western academia debates when Islam arrived in China, Prophet Muhammad and his companions certainly would have been aware of China and the Chinese aware of the events taking place outside their area.

Further north, along the Central Asian Silk Road, that went from the Middle East through Central Asia to China via Samarqand, Kashgar and Xi’an, a similar exchange took place.  It brought an increasing number of Turkic and Persian populations eager to convert others to the new religion coming out of the Middle East.  Many of the Muslims who visited China settled and married local women which helped to foster closer ties.  And then hundreds of years later countless Muslims migrated to China during the Yuan Dynasty (1271–1368), when whole populations shifted across the vast Mongol Empire.

A detailed account of the arrival of Islam and settlement of Muslims in China can be found here: https://www.islamreligion.com/articles/486/viewall/islam-in-china/

Today, although Muslims make up less than two percent of the population, there are more than 20 million Muslims in China. Ten of China’s 55 officially recognized ethnic minorities are Muslim. According to government figures, there are 35 thousand Islamic places of worship and 45 thousand imams in China.[1]  However even after 1400 years Muslims who are culturally Chinese must justify their devotion to One God to their skeptical non-Muslim neighbors and do so in an increasingly intrusive state.

Southeast Asia is a subregion of Asia, consisting of the countries that are geographically south of China, east of India, west of New Guinea and north of Australia. Islam is the most widely practiced religion with more than 240 million adherents. Just how did Islam spread into Indonesia and Malaysia?  It travelled on the monsoon winds, and with the Arab traders who carried God’s message.  Indonesia now has a Muslim population of 88% and Malaysia has a Muslim population of 61.3%.[2]

Spread across a chain of 17 to 18 thousand islands Indonesia lies between Asia and Australia.  It has the world's largest Muslim population and Southeast Asia's biggest economy.  Indonesia stretches along the equator and 922 of its islands are permanently inhabited.  The country's strategic position fostered inter-island and international trade which in turn fundamentally shaped Indonesian history.

According to early accounts from the Abbasid caliphate, the Indonesian archipelago was famous among Muslim sailors due to its abundance of precious spice trade commodities such as nutmeg, cloves and galangal.  Arab traders had settled there by the 13th century CE and the gravestone of Sultan Malik Al-Saleh, dated 1297 CE, is one of the oldest Islamic inscriptions to be found in Indonesia.[3]  This indicates that the first ruler of Samudra, a Sumatran state, was Muslim.  Furthermore, and supplying more verifiable evidence for early Islam in Indonesia, famous Venetian traveler Marco Polo stopped in northern Sumatra on his way back to Europe from China in 1292.[4] He visited an Islamic town named Perlak.  Arab traveler Ibn Battuta visited the same town in 1345-46 and wrote that its monarch was a Sunni Muslim.[5]

Islam spread into the Indonesian islands slowly via one of two routes.  The native people came into contact with Islam and converted, or foreign Muslims, from India, China and the Middle East, visited Indonesia and settled there mixing in with the local communities.  It seems that the new comers did not force their own customs and culture on the local populations but instead adopted their local culture while introducing the Oneness of God and the requirements of the Shariah.  Islam was carried from island to island. Each time the inhabitants of an island accepted Islam; they then worked hard to convert others.

Particular consideration should be given to Aceh and Sultan Iskandar Muda (1607–1636) the twelfth Sultan of Aceh who took the kingdom to its most powerful level and instigated interaction with the Ottoman Empire.[6]  In the first half of the seventeenth century Aceh was the dominant economic and political power of the region. It captured and controlled the northern half of the Malay Peninsula and northern and parts of central Sumatra.[7]

The entire Malay Archipelago was at one time known as Malaysia; however, a geographically reduced Malaysia emerged out of the territories colonized by Britain in the late nineteenth and early twentieth centuries.  In 1963 parts of Malaysia, to the east and the west united into one country. Western Malaysia stretches from the Thai border to the island of Singapore and is on the southern tip of the Malay Peninsula.  The territories of Sabah and Sarawak separated by the country of Brunei, on the north end of Borneo, make up the area known as Eastern Malaysia.[8]

Bountiful natural resources such as tin, camphor, brazilwood, ebony and gold can be found in Malaysia’s interior.[9] Thus through the ages, ships have used the coast of the peninsula to dock and transact business.  Trade on the Strait of Malacca helped to create economic links between China, India and the Middle East, and thus Islam slipped effortlessly down the archipelago with Arab, Persian and Indian traders who controlled business in the area. It was a peaceful conquest.

The name Malacca comes from the Arabic word Malakut. An Arab trading post had been established in the 8th Century CE and Islam spread throughout the Malay Peninsula in the same way it spread in Indonesia; either the local inhabitants were attracted to and embraced Islam, or traders decided to settle in the area.

By the time the Spanish and Portuguese arrived in the early 16th century, Islam was firmly established in Southeast Asia. It continued to develop in the 17th century, when Arab traders and scholars purposefully migrated to the area. European powers, or trading companies representing them, began to encroach on the region, establishing themselves as participants in its economic and political life. Despite colonialism by the 19th century Southeast Asia had established itself as an important part of the Muslim world.

[6] Architecture and the Politics of Identity in Indonesia.  Izziah Hasan 2009
https://digital.library.adelaide.edu.au/dspace/bitstream/2440/65554/8/02whole.pdf

[8] Countries and their Cultures. http://www.everyculture.com/Ja-Ma/Malaysia.html