Description: God describes scenes from the Day of Judgement. 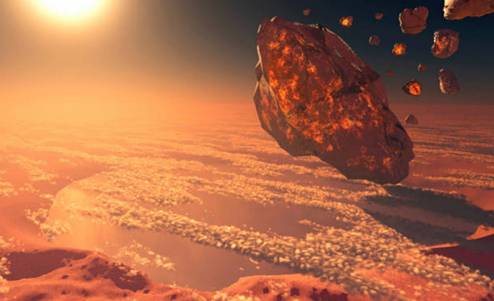 The Striking Hour is a short Meccan chapter of eleven verses.  As is the case with most Meccan chapters, this chapter also focuses on the fundamental beliefs of Islam.  In this chapter we are presented with scenes from the Day of Judgment and confronted by the possibility of a shocking outcome in the Hereafter.  It deals with what takes place on that momentous Day and what it will lead too.

The Striking Hour is one of the names God uses for the Day of Judgement.  Throughout the Quran, He uses many different names each one designed to convey a particular aspect of the earth-shattering event.  Other names used include the Overwhelming One, the Deafening Shout and the Great Catastrophe.

Al-Qariah is most often translated to The Striking Hour, but it is also known in English as The Striking Calamity, or the Crashing Blow.  The word Qariah describes all of these things.  Originally the word Qariah meant the knocking one, a strike or a blow, the act of hitting, and a single blow.  However, in the wider sense it can mean a major misfortune or calamity.  With either definition it conveys a sense of alarm and a startling noise.  It is something that shakes you to the core and fills you with fear.

Thus God is warning us that there will be a striking hour, and it will chill us to the bone.  It will startle us out of our complacency.  Do you know what it is God asks, do you know what it means?  What will make you understand that this Day and this Hour will be a reality?

The reality of this event however is that it is too great to be fully understood.  God’s question is a rhetorical question because the truth is that we will never ever fully comprehend it until we experience it.  God follows His question with some scenes that describe that Day.

This is the Day when people will be like scattered moths and the mountains will be like tufts of wool.  In order to help us understand God mentions two things that people are familiar with.  People (humankind) pride themselves on their intelligence and their abilities.  We consider ourselves to be clever and able to organise into workable societies and communities.  However, on this inevitable Day this will mean nothing.  All people will be so startled and shocked we will be like scattered moths, running in all directions not sure of what to do or how to behave.  We have all observed moths, flying in all directions and often times flying straight into danger.

Mountains too are an object that we are familiar with.  They stand like guardians on the earth, strong and impenetrable.  Mountains are parts of creation that are imposing and insurmountable but on this Day they will no longer be fixed to earth like pegs; they will instead be like tufts of wool, or as in some translations, like carded wool.  In either case it is wool that is no longer stable, instead it is broken away from the whole.  The present order of the world will be overthrown.  People will be confused, running about like moths drawn to a flame and the mountains will be flying about or crumbling.

Next God shifts the narrative to a different aspect of the Day of Judgment, the Judgment itself.  The person whose scale is heavy with good deeds will learn that they will have a good life in the Hereafter.  The first scenes leave our minds in a panic, everything we know about the world will change.  But now God lightens the blow.  Those with scales heavy with good deeds have nothing to fear; they will now have a life where the necessities of life will not be a concern, everything will be provided, and they will be satisfied.  In other words, it is a life full of contentment and joy.

On the other hand, there will be people who stand before God with scales that are light.  Their bad deeds far outweigh their good deeds.  These people will have no home in the Hereafter apart from the abyss.  They will be cast into a deep pit.  The Arabic word used is Hawiyah, and it usually used to describe a deep canyon that goes down, down, endlessly down.  Hawiyah is a deep canyon in Hell.  The person will be completely surrounded and held firmly in the abyss.

Again God asks what is it that will make you aware of just what this punishment is.  How can you really know the depth of the abyss or what it entails? It is beyond comprehension and imagination;  you can only hope for a glimpse or a hint of what it will be.  God answers his own question and knowing does not put your mind at ease.  The answer comes as a swift blow to the senses.  The abyss is a raging fire, a deep canyon of raging, spitting flames, and fire.

Alhamdulillah, this article makes Chapter101 very clear; I am going to read it.

very simple to understand and ponder over and a reminder that we should prepare ourselves all the time in the remembrance of Allah swt and not just busy ourselves in the worldly gains.