The Concept of Ummah in Islam

Description: The definition of Ummah and its role in the advancement of humankind. 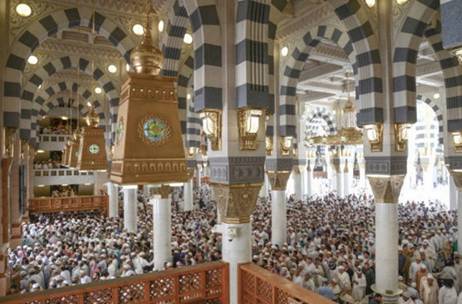 Ummah (sometimes spelled Umma) is an Arabic word that is usually translated into English as nation. Thus, when someone from an English-speaking background hears the word Ummah defined, they immediately think of the nation state whose members live between a set of predefined borders. This however is not technically correct because Sha’b is the Arabic word that means nation. However, Ummah does not only define a group of people with common ancestry or in the same geographical region; it means this plus much more.  Dictionary.com defines Ummah as the Islamic community, which is a somewhat better definition.

As is the case with many Arabic words, the common translation of Ummah as nation fails to identify the layers of meaning and the nuances of Arabic grammar. The root of the Arabic word Ummah is amma, meaning to go or to go and see. The word Imama means to lead, for example, the one who leads the prayer is the Imam. Also derived from this root is the word Umm which means mother, source or origin. The definition of Ummah is a community of believers bound together with a common purpose, to worship God and with a common goal to advance the cause of Islam.

The Ummah, or Muslim community, is a group of people from diverse backgrounds, ancestry, locations and nationalities. They are a community without borders yet united in a very real way. Though separated by distance and often constrained by borders they are united. They are one nation or community united under the guidance of the One God.

"And verily this Ummah of yours is one Ummah and I am your Lord and Cherisher, therefore fear Me and no other." (Quran 23:52)

In various translations of this verse the word Ummah is replaced by religion and in this context religion means a collective way of life or course of conduct followed by a community; in other words, an Ummah or nation of believers.

In the Quran God does not use the word Ummah exclusively to refer to the Ummah of Muhammad, may the mercy and blessings of God be upon him. He often uses Ummah to refer to a group of people who share common religious beliefs. God tells us that in the beginning humankind was one Ummah but circumstances divided the people. Ummah is also mentioned in the Quran in relation to communities with their own messengers. For example, the Quran uses the word Ummah to refer to the communities of the past such as the Ummah of Prophet Moses or the Ummah of Prophet Jesus.

"Humankind was one single Ummah. And God sent messengers with glad tidings and warnings; and with them He sent the Scriptures in truth, to judge between people in matters wherein they differed…" (Quran 2:213)

Prophet Muhammad was sent to nurture an Ummah for the benefit of humanity, one designed to include all of humankind. He was commanded by God to transmit a divine message; both a guidance and a warning to all. And in the Quran God refers to the Ummah of Muhammad as the best community.

"You are the best community (Ummah) raised up for (the benefit of) humanity; enjoining what is right and forbidding what is wrong and believing in God…" (Quran 3:110)

The Ummah of Muhammad is known throughout Islamic history and throughout the world as community of believers united in their devotion to One God. Anybody who embraces Islam becomes a member of the Muslim Ummah. All members, the believers, are united by a very special bond that resembles the ties that bind a close family. Muslims are brothers and sisters to one another. They should be incapable of being indifferent towards one another but instead should operate as one body or one community with a spirit of cooperation, good will, empathy and unity.

The example of the believers in their love, mercy and sympathy for one another can be compared to one body; when any part of the body aches the whole body responds with sleeplessness and fever.[1]

Prophet Muhammad was constantly concerned for the well-being of the Ummah. He worried not so much about their life in this world but fretted over their place in the Hereafter. He is known to have been distressed over the welfare of his Ummah to the point that he would cry until his beard was soaked with tears. My Ummah, my Ummah were the words he spoke in his supplications to God.[2]

Every member of the Ummah is regarded as equal before God. There is no distinction between black and white and any colour in between. Islam brings everyone together into one community; all are equal members regardless of gender or status. It commands us to follow the guidance and heed the warnings contained in the Quran and the traditions of Prophet Muhammad. And it is only through piety can one person be raised above another.