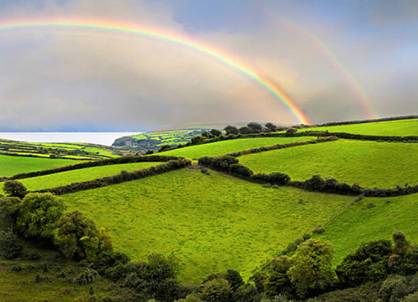 Humankind was one nation with one religion but soon people invented their own religions. Thus God sent prophets and messengers with good news, warnings, and guidance with which to settle disputes. They started more disputes because of rivalry. God guided those who believed; He guides whoever He wants.

Do you think you will enter Paradise without trials, even though you have seen what happened in the past?  They were afflicted with poverty and hardship until even their messengers cried out to God. God’s help is close at hand.

When they ask what they should spend in charity tell them to spend on their parents and relatives, and orphans, the needy and the traveler. God knows the good you do. Fighting is obligatory even though you might dislike it. Perhaps you dislike things that are good for you and love things that are bad for you. God knows, you do not.

Fighting in the sacred month and creating mischief in the sacred mosque are offences greater than killing.[1]  When they ask about charity tell them to spend whatever they can. God makes His revelations clear so that you may reflect. Deal justly with orphans. Do not marry a polytheistic person until they believe. A believing slave is better than a polytheist free person. The polytheists invite you to the Hellfire while God invites you to Paradise and forgiveness.

Do not have sexual intercourse when your wife is menstruating; wait until she becomes pure. God loves those who are clean. Have sexual intercourse in any way that is pleasing to you but do not contravene God’s commandments. Take care of your future. Do not use God’s name in oaths or as an excuse. You are not blamed for what is unintentional.

Those who renounce sexual relations with their wives have a limitation of four months. After that is reconciliation or divorce. Divorced women must wait three menstrual periods before remarrying and must not conceal a pregnancy. In that period they can reconcile. Wives have rights similar to their obligations but husbands have a degree of responsibility above them. There are only two revocable divorces. The third is irrevocable. Do not take back any gifts unless you make a mutual arrangement. After the third divorce a couple cannot marry unless the wife marries and is divorced by another man. During the divorce act with dignity and honour and do not cause trouble; God sees everything.

Breastfeeding is for two years if it is desirable; maintenance is the responsibility of the father. No person should suffer on account of their child. Treat wet nurses in an honourable manner. A widow must wait four months and ten days before she remarries. It is permissible to propose marriage during the waiting period, however, do not confirm the marriage until after. A divorce is acceptable before consummation or the dowry is settled but pay them something; and if the dowry is settled then pay half, unless the woman waives it, full is more honourable. Guard your regular prayers especially the middle one.  If you fear danger, pray while walking or riding. Maintain widows for one year and do not expel them from their homes.[2]  Treat divorced women in a fair manner.

Reflect upon the people who fled their homes fearing death. God caused them to die and then return to life. Fight in God’s cause. Give God a good loan and He will increase it many times. Reflect on what happened after the death of Moses. The Jews were ordered to fight in God’s cause yet most refused. Saul was chosen by God to be king but many questioned his worthiness. Their Prophet said that the Ark of the Covenant will come to you as a sign of his kingship. At the river most of them failed God’s test. But the believers among them knew that often God supported small groups. By God’s will David killed Goliath and was given Saul’s kingdom. God repelled one set of people by the might of another.

Muhammad, may the mercy and blessings of God be upon him, is one of the messengers, and some messengers are exalted above others. God spoke directly to some.  Jesus was given clear proofs and was supported by the Holy Spirit. If God had willed it some groups of people would not have fought each other. Give charity from what God has provided before the Day comes when there will be no bargaining or intercession.

God, there is no deity except Him. He does not sleep, and everything belongs to Him. There is no intercession without His permission, and His knowledge includes every aspect of the past, present and future. His knowledge is incomprehensible except for what He reveals. His throne is vaster than the heavens and the earth and guarding them does not exert Him. He is the Most High.

There is no compulsion in religion. Whoever rejects the forces of Satan has a firm handhold that will not break. God leads from darkness to light but Satan leads from light to darkness. Reflect upon Nimrod and Abraham. Nimrod considered himself a god but Abraham pointed out his error. And think about Prophet Ezra who died for 100 years. Ezra saw God’s power over life and death. And consider when God showed Abraham how to bring four birds back to life.

Those who spend to please God will be rewarded many times. Those who do not remind people of their benevolence or follow their charitable deeds with hurtful words will see their reward. God reminds of this fact with parables and cautions us not to make our charity worthless. Give from the best things that you have not things that are no longer useful to you.

Satan threatens you with poverty and tries to make you commit sin, while God offers His forgiveness and bounties. God gives wisdom to whom He wills, and whoever is given wisdom is certainly blessed with a lot of good. God knows your charity and your vows. Public charity is good but private charity is better. This will quash some of your sins. Prophet Muhammad is not responsible for guidance, God guides whom He wills. Charity to please God will be to your advantage. It will be paid back in full. Give to those who are in need while engaged in God’s work. You can recognize them by their appearance, and God knows what you spend. Those who give charity openly and secretly have nothing to fear. Trading is lawful but interest is forbidden, it leads to the Hellfire. Interest is cursed, charity is blessed. Write contracts when lending to each other, and let there be witnesses. This is more just but unnecessary for small business transactions. On a journey pledges can replace contracts. Do not conceal testimony.

Everything belongs to God. You will be asked to account for everything you do. God will pardon or punish as He pleases. He has complete control. Prophet Muhammad and the believers believe what has been revealed by Him. They believe in God, His angels, His books, and all of His prophets, equally. They hear and obey. God does not burden anyone with more than they can bear. Each person will bear the consequences of their actions. The believers ask God to forgive their forgetfulness and mistakes, to not burden them like those who came before them, and to not lay on them a burden they are unable to bear. They ask for forgiveness, mercy, and help against the unbelievers.