Description: The Jews continue to break covenants and prove their faithlessness.  Abraham’s religion and the direction of the prayer are discussed. 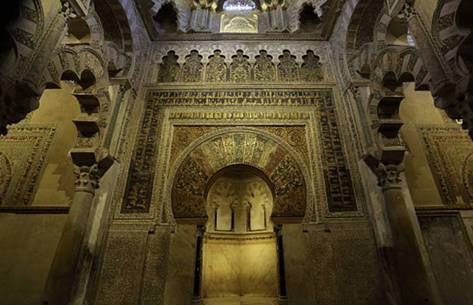 If you (Jews) really believe that Paradise is for you alone why don’t you wish for death? They will not because they are well aware of the consequences of their behavior.  God understands how the disbelievers’ minds work.  They are greedy for life, wishing for a thousand years, but not even that will save them from the promised punishment.

The enemies of angel Gabriel should know that he brought the Quran to Prophet Muhammad, may the mercy and blessings of God be upon him.  Whoever is an enemy to God, His angels, and His messengers should know that God is the enemy of such unbelievers.  Those who refuse to believe the clear messages defy God.  Every covenant was thrown aside.

When the Messenger confirmed their scriptures, they hid their books as if they were nothing.  They accepted what the followers of Satan falsely attributed to Solomon.  In Babylon the angels Harut and Marut taught the people witchcraft after warning them not to disbelieve.  They learned from them how to cause discord between a man and his wife although they could harm no one except with God’s permission.   What they learned was harmful and of no benefit in the Hereafter.  Being mindful of God would have been a better choice.

When speaking to Prophet Muhammad do no use ambiguous words in order to abuse him.  The disbelievers do not want you receive any good from God, but God chooses whoever He pleases.  God does not abrogate a verse or cause one to be forgotten except that He sends one better or similar.  God has dominion over the heavens and the earth and He is the only Protector or Helper.  Do you intend to persistently question Prophet Muhammad the way Prophet Moses was questioned? Whoever exchanges belief for unbelief is lost.  Many Jews and Christians wish they could turn you back from your belief; forgive them and put up with their behavior until God gives His command.[1]  Establish the prayer and pay your obligatory charity.   Whatever good deeds you send forth for yourselves, you will certainly find its reward with God.  God has power over all things and sees everything.

Saying no one will enter Paradise unless they are a Christian or a Jew is just wishful thinking without evidence.  Any good person who submits to God (i.e.  follows Islam) will have nothing to fear.  The Jews, the Christians, and the pagan Arabs all accuse each other but God will decide between them.

The most unjust are those who prevent the mention of God’s name and try to destroy the mosques. They will have disgrace in this world and punishment in the Hereafter.  Both the east and the west belong to God so no matter where you turn you will find His Face.  They say that God has a son! Exalted is He above all they falsely attribute to Him.  Everything belongs to Him, He only has to say "Be," and it is.  They ask why God does not speak to them, but there are clear signs for those who have faith.  Prophet Muhammad was sent with the truth to convey the message, and he is not responsible for the inhabitants of the Fire.

The Jews and Christians will never be satisfied until you follow them, but if you turn from the truth you will lose.  Those who disbelieve are losers, but some who follow the previous scriptures recognize the truth.

Remember, Children of Israel, how God favoured you over others, and fear the Day when there will be no help of any kind.  When Abraham was tested and fulfilled God’s commands, He made him a leader.  Abraham asked about his descendants and God said only those who did not do evil would be leaders.

Remember also when the Kabah was a sanctuary and God instructed Abraham and Ishmael to cleanse it for those going around it in circles.  Abraham asked God to secure and provide for those who believed in God.  God answered that He would provide for the disbelievers also but that their enjoyment would be short and then they would be subjected to the torment of the Fire.

Abraham and Ishmael renewed the foundations of the Kabah and asked God to accept it from them.  They asked God to make them and their descendants Muslims.  And Muhammad was appointed from among them.  Only a fool would not accept the religion of Abraham.  God chose Abraham to be a Muslim and he left this legacy to his sons.  And Jacob commanded his sons to devote themselves to God, warning them not to die unless they are Muslims.

The Jews were not there when Jacob was dying.  He asked his sons what they intended to worship after he was gone.  The sons answered that they would worship his God and the God of Abraham, Isaac and Ishmael.  That community passed away and they will be answerable for their own deeds.  When they ask you to be Jews or Christians, answer that you follow the religion of Abraham.  The believers should answer that they believe in God and what was sent down to all the prophets without making a distinction between them.  Believers should say God ordained our religion.

Muhammad is told to tell the disbelievers not dispute about God and that all will be held accountable to Him.  Are you saying that Abraham and his descendants were Jews or Christians? Who would know better, you or God? Who could be more wicked than the person who hides the truth from the previous scriptures attesting to the nature of God’s religion and the coming of Prophet Muhammad.  This nation has passed on and only they will be questioned about their deeds.

Foolish people will ask what caused the change in the prayer direction.  All directions belong to God, and He changed the direction only to determine who the true followers of Prophet Muhammad were.  It was a hard test.  Many times God watched Prophet Muhammad turn his face towards heaven; now the faces will turn in a direction that will please him, towards the Kabah.  The Jews and Christians will not accept your direction.  Do not yield to their desires or you will be among the wrong doers.

Those who received the scriptures before you conceal their knowledge.  The truth is from God, do not doubt it.  Each religious community has its own direction (to face), so compete with each other to do good deeds, and God will bring you all together on the Day of Judgment.  When you pray, turn towards the Holy Kabah in Mecca.  Prophet Muhammad recites the Quran and teaches you wisdom.  Remember Me (God), be grateful and do not deny Me, and I will remember you.  Seek help through patience and prayer because God is with the patient.  Do not say that those who die in God’s cause are dead; they are alive, but you are unable to perceive it.