Description: An explanation of what the word Shariah means and the details of the place it holds in the life of a Muslim. 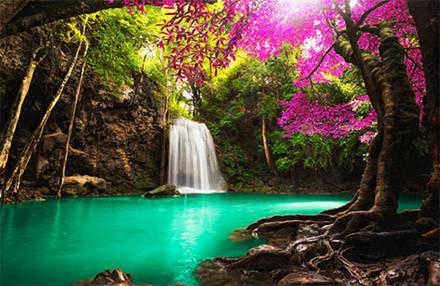 Recently the word Shariah has become very familiar.  Across the globe people are fond of using it even when they are not familiar with what it actually means.  Sections of the media and hate groups give the impression that Shariah is a set of draconian laws intent on amputating hands and lopping off heads.  This explanation is far from the truth.  Shariah literally means a well-worn path to a water source, and Islamically, it is a term that is used to describe Islam as a complete way of life.  Water is essential to human life and the religion of Islam is essential to complete spiritual wellbeing.  Thus Shariah is a set of laws that provide a clear and straight path to fulfillment in this life and success in the Hereafter.

The Shariah is made up of commandments, rules and regulations that are designed by God to protect and benefit all of humankind.  It is true that the Shariah does encompass a penal code and system of law but that is only one aspect of it.  It also provides the framework for a functioning society with specific moral, ethical, social and political codes of conduct.  The Shariah allows each individual to form an ongoing relationship with God.  Its laws provide the guidance humankind requires so that good will triumph over evil.

The Shariah covers two main areas, worship and worldly matters.  In both, the scholars of Islam generally agree that mercy is its overriding principle.  God says in the Quran that Prophet Muhammad, may the mercy and blessings of God be upon him, was not sent except as a mercy to humankind.  (Quran 21:107) Prophet Muhammad reiterated this concept when he told his followers that "God shows mercy to those who have mercy on others.  Show mercy to those on earth, and the One above the heaven will show mercy to you."[1]

The Shariah is derived from the primary sources of Islam, the Quran and the authentic Sunnah, or teachings, of Prophet Muhammad.  The Quran gives us the main principles while the Sunnah provides the details of their application.  For example, when the Quran tells us to establish the prayer we must turn to the Sunnah in order to understand the details of how to pray.   The Shariah also includes scholarly consensus, legal analogy and interpretive reasoning.  This allows the Shariah to remain relevant in changing social and cultural circumstances.

Family law is one of the worldly matters in the Shariah and it includes marriage, divorce, matters pertaining to children and inheritance.  Common law covers, buying and selling, contracts and other financial matters.  The penal code or criminal law includes robbery, murder, adultery, rape and slander.

It is almost universally accepted that there are five objectives or goals with which the Shariah preserves basic human rights.  These rights are faith, life, the family, intellect and wealth.   Fourteenth century legal scholar, Ibn al Qayyim stated that, the foundation of Shariah is wisdom and the safeguarding of people’s rights…"

1.     Faith (religion).  God has made religion and worship obligatory.  He has made the religion of Islam, and all that it entails, obligatory.  Thus the first objective of the Shariah is to uphold the right to worship God in the way that He has commanded.  The Shariah also contains rules and regulations pertaining to learning and propagating the religion.

3.     The Family.  Marriage is legislated in the Shariah and sex outside of marriage is forbidden.  Every child has the right to grow up in a family and in safety, thus taking care of the family and the needs of orphans is an essential part of the Shariah.

4.     Intellect.  Sound intellect and knowledge is promoted and anything that corrupts or weakens it, such as alcohol and drugs, are forbidden.  A strong intellect is a benefit to humankind, thus the Shariah encourages the education of both sexes.

5.     Wealth.  People have the right to own and protect their wealth and property.  Theft is forbidden, transactions are regulated and usury is forbidden.   Laws that promote justice and fair dealing have been provided to govern commerce and transactions.  Via obligatory charity the wealth of the community reaches those in need.

The Shariah is a straight way and a set of God given guidelines that when followed correctly will assure that every believer attains the ultimate success; a blissful life in the Hereafter.  God said of the Shariah, "Then We put you, [O Muhammad], on a straight way concerning the matter [of religion]; so follow it and do not follow the inclinations of those who do not know." (Quran 45:18) Thus we find that the Shariah is all about justice, mercy, wisdom, and righteousness.  Any opinion or Islamic ruling that replaces justice with injustice, mercy with its opposite, good with mischief, or wisdom with nonsense, is an opinion that is not Shariah, even if it is claimed to be so.[2]

In the last few years it seems that anybody who is literate can claim to be qualified to make Islamic rulings.  Because of this, it is important to remember that the behavior of a Muslim may not be from the Shariah, and the opinion of a scholar may also not be from the Shariah.  Similarly the actions of a group of people, or a state that calls itself Islamic, may not be in accordance with the Shariah no matter how many times they proclaim themselves to be Muslim. The Shariah is defined by the moral purposes and the ethical principles set in the Quran and the authentic Sunnah of Prophet Muhammad.  Any interpretations that defy those doctrines are wrong and not from Islam.

Very interesting article. It cleared up some questions about Sharia law.

May Allah SWT. Reward you all for the kwonledge that you impacting to us.

shariah is the best