Description: Humankind is reminded of God’s majesty and power.  He also reminds us to reflect on our abundant blessings and not to be deluded by worldly matters. 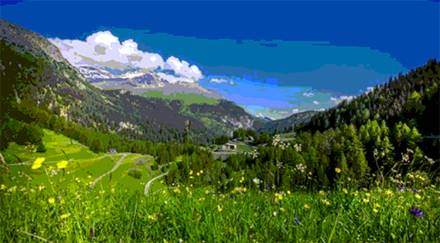 The Originator is a forty-five verse chapter.  It was revealed during the period in which the small fledgling band of Muslims was suffering from persecution and oppression at the hands of the Meccan elite.  The title comes from the first verse in which God’s power of creation is affirmed.  This chapter is alternatively known as The Angels, also from the first verse where God mentions the wings of the angels.  God’s power is confirmed and contrasted with the powerlessness of idols.  The idolaters receive a warning and the Prophet is comforted.

All praises belong to God.  He is the one who created the heaven and the earth.  He also created angels, with two, four, or six pairs of wings, to be His messengers.  God creates whatever He pleases.  When He wants to give blessings no one can withhold them but if He wants to withhold His blessings no one is able to release them.  Remember God’s graces because there is no god who is able to provide the sustenance you require.  Why are you deluded about this matter?

God addresses Prophet Muhammad, may the mercy and blessings of God be upon him, saying, do not be upset if the people call you a liar and deny you.  Many messengers before you were treated in this way.  Then God address the people saying that His promise is true and warning them not to be deceived by Satan who is the great Deceiver.  Satan is your enemy so treat him as an enemy.  He only wants you to follow him into the Fire.  Those who disbelieve will be punished but those who do good deeds will find forgiveness and rewards.

Oh Muhammad, are you able to guide the people whose evil deeds are made alluring to them? The truth is that God chooses who will be guided and who will be left to wander in the dark so do not feel regret.  God is aware of everything they do.  He is the one who revives the earth with winds and clouds after it has been dead; in much the same way the Resurrection will take place.  All power belongs to God and a severe torment belongs to those who plot and plan.  Their plans will come to nothing.

It is God who created humankind; first from dust and then from a drop of fluid.  He made you into pairs, and no female conceives or gives birth without His knowledge.  And no person grows old or has his life cut short except that it is in accordance with what is written in God’s record.  There are two bodies of water but they are not alike.  One is sweet and pleasant to drink but the other is salty and bitter.  From each you can extract food and ornaments.  And the ships move through them.  God makes the night and the day and they merge into each other, and the sun and the moon rise and fall at appointed times.   The things you worship other than God cannot even control something as small as the skin on a date stone.  If you invoked them they would not hear and if they heard they would not respond.  And on the Day of Judgement they will deny you.

Humankind, you need God but He does not need you.  He is free of all wants or needs.  If He so desired he could destroy you and replace you with a new creation.  No one can carry another person’s burden.  Prophet Muhammad is only able to warn those who already fear their Lord and establish the prayer.  Those who purify themselves do so for their own benefit, not to benefit God.

The seeing and the blind are not the same, nor are darkness and light, or heat and shade.  The living and the dead are not equal.  There is a difference between those who are guided and those who refuse.  Prophet Muhammad is a warner who has been sent with the truth.  Every community was sent a warner, and many of them were called liars even though they came with clear signs, scriptures and enlightening revelations.  In the end God seized the disbelievers and His disapproval was terrible.

God sends down rain from the sky and from it the earth brings forth fruits and vegetables and plant life.  The mountains are made up of streaks and tracts of various hues and colors.  Humankind and animals are also made up of different colors, shades and hues.  Those who have knowledge stand in awe of God.  Those who recite from the Book, establish the prayer and give generously from what God has provided them with should expect a reward that does not perish.

The Quran is the truth and it confirms the scriptures that came before it.  God has given the Quran as an inheritance for those He has chosen.  The believers will enter Paradise and they will praise God.  However, those who reject the truth will be in the Hellfire where they will never find relief.  They will cry out to be given another chance but they have already had many chances.

Verses 38 – 45 God knows the unseen and sees everything

God knows the unseen and all your secrets.  You forget that He made you vicegerent on this planet.  You are a representative of God and should act accordingly.  Those who deny the truth will bear the consequences.  Have you thought about those you invoke others besides God? What have they created? Do they have a Book? No, they do not; their promises are delusions.  It is God who holds the heavens and the earth together.   If they should slip no one could hold them in place except God.

They swore that if a warner came to them they would have believed.  The warner did come but they treated him with hostility.  Evil plots only entrap the plotters.  Are they waiting for the same end as the end that came to previous more superior nations? God’s methods have not changed.  If God were to punish the people for their sins, there would not be a single person left on the planet.  But He gives them respite, and on the Day of Resurrection mankind will be brought to account.  Each person will be rewarded or punished according to what they did.