Description: The revelation of the Quran is joyful news and rejecting God’s gift will result in severe punishment. 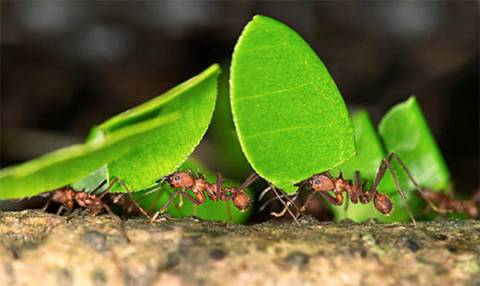 The Ants, a ninety-three verse chapter, was revealed in Mecca.  It opens with a description of the Quran as joyful news for the believers and a severe warning for the non-believers.  We then encounter several short narratives concerning prophets and the communities that did not believe their warnings.  These narratives are illustrated with examples of God’s power and the contrasting lack of power possessed by the things they worship other than God.  There are descriptions of the Day of Judgement and the chapter closes by reiterating the beginning verses—the Quran is good news for the believers but a warning to others.

Verse 1 is a combination of the letters ta and seen.  They are two letters from amongst various combinations of fourteen letters that open twenty-nine chapters of Quran.  God did not reveal any specific meaning attached to them.  Immediately following the letters, God says that this scripture is a guide for the believers.  It is joyful news for those who pray, give charity, and believe in the Hereafter.  One the other hand those that do not believe wander blindly believing that their lives will have no lasting consequences.  They are wrong.  Their punishment will be severe, and this scripture is a warning.  Prophet Muhammad, may the mercy and blessings of God be upon him, receives this Quran from the one who is All Knowing.

While travelling with his family Moses sees a fire.  He walks towards the light telling his family that he will return with either news or burning sticks with which to make their own warming fire.  When He reaches the fire, God calls out to him and introduces Himself.  God orders Moses to throw down his staff; he complies but runs away in fright when the staff begins to move like a snake.  God tells him  to stop and that the messengers should not be afraid when in God’s presence because He, God, is merciful and forgiving.  God then tells Moses to put his hand inside his cloak and when he withdraws it, it will be shinning white.  God explains that these are two from the nine signs that will be given to Pharaoh to convince him to submit to the One God.  Pharaoh and his advisers call the signs sorcery.   They knew the signs were miracles yet denied them and thus came to a very bad end.

When God gave knowledge to David and Solomon they praised Him.  They understood the language of the birds and Solomon inherited the Kingdom of David.  Solomon’s soldiers marched in rows, jinn, humans and birds.  When the armies marched through the valley of the ants, one ant directed the others so that they would not be crushed.  Solomon understood and smiled widely, and beseeched God to give him the strength and ability to be grateful, the ability to perform good deeds that He loves, and to be with the righteous.

Solomon inspected the birds but could not find the hoopoe.  The hoopoe returned saying that he had been in Sheba where he found a woman leading the people.  She had a magnificent throne but they all worshipped the sun instead of God.  Solomon sent the hoopoe with a letter for the Queen of Sheba.  She read the letter to her counsellors.  It was an invitation to submit to the will of God.  Solomon and his army had not invaded the city so she decided to send a gift.  When the gift arrived, Solomon said that they could not give him anything that God had not already provided for him.  Solomon sent them away with a threat to invade their city.

Sheba decided to come in person, and whilst waiting Solomon asked his own counsellors if someone was able to bring him Sheba’s magnificent throne.  One of the jinn was able to produce the throne within the blink of an eye.  When Sheba arrived, she was asked if what she saw was her throne and although it was disguised she said it looked as if it was.  When Sheba was asked to enter the palace, she thought she was about to wade through water and lifted her skirt, however the floor was made of shinning smooth glass.  When she saw for herself what God had given Solomon and how majestic his position was, she submitted to the command of God and acknowledged that he was a noble Prophet.

Saleh called the people of Thamud to worship One God, but they split into rival factions.  One group said that Saleh and his followers were an evil omen.  The leaders of some families took an oath that they would together kill Saleh and his family.  They planned a deceitful plan, but God also planned a plan.  The outcome was that their plan came to nothing and they were destroyed, and their desolate houses are a sign for those who think.  The true believers were saved.

Lot was sent to his people to ask them why they openly committed homosexual acts even though they knew it to be wrong.  They had no answer except to try to expel Lot and his followers from the town.  So God saved Lot and all his family; except his wife who was destined to be one of those who stayed behind.  An evil rain of stones pelted down on those who chose to ignore the warning.

Prophet Muhammad is asked to praise God, send peace upon the messengers.  He is also instructed to ask who is better, God, who created the heavens and the earth and all that is in them, or another deity? Clearly it is God who made rivers flow and firmly fixed the mountains and other wondrous things.  Why then do they worship something other than God? Who answers the calls of the distressed and removes the burdens of the suffering? God, He the One who is above all that they associate with Him.  There is no one with knowledge of the unseen except God.  It is He who knows when the dead will be raised.

This perturbs the unbelievers who say they have heard ancient tales about the dead being raised and do not believe it.  They must therefore travel throughout the land see for themselves what has happened to those who did not heed the warnings of a Hereafter.  God is bountiful even though most people are ungrateful.  Nothing is concealed from God; it is all kept in a clear record.  The Quran is guidance and a mercy.  God will be the judge and Prophet Muhammad should not grieve over the people who will not heed his warning.  Instead he should put his trust in God because he is on the straight path.  He cannot make the deaf or dead hear; he cannot lead the blind.

A day will come when the disbelievers will be led before God in groups.  The verdict will be given but they will not speak.  God sent signs for those who believe and those who think.  When the trumpet sounds many will be terrified; the firm mountains will pass away like clouds.  On that Day, a good deed will keep a person safe, but an evil deed will see them flung into the Fire.  Muhammad says that he has been commanded to submit to God, to worship Him and recite the Quran.  Mohammad is only a warner; all praise belongs only to God, and God is never unaware.

AoA, Nice summary. The creature who brought Saba's throne was not a Jinn, as mentioned in Quraan that "...another person who was given the knowledge of the book..." Before that, Jinn is clearly mentioned who offered to bring the throne. May Allah forgive us for any mistakes. AAMEEN.