Description: Three verses that warn against those who twist and change the words of God.

There are some among them who twist their tongues when quoting from the Book so that you might think that what they say is from the Book when it is not. They say that it is from God when it is not from God. Thus they deliberately lie about God. It is inconceivable that any person to whom God had given the Book and wisdom and prophethood would ask the people to be their servants rather than God’s. On the contrary they would say, "Be devoted worshippers of God in accordance to what is in the Book you have been teaching and reading." They would never ask you to take angels or prophets as lords (gods) and they would never ask you to be disbelievers after you had devoted yourself to God. (Quran 3:78-80) 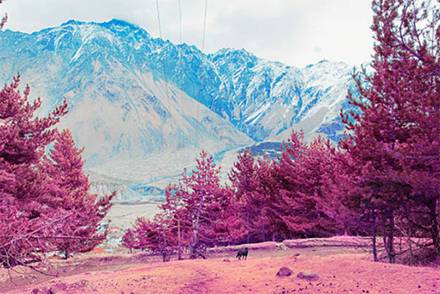 The three essential verses under discussion are taken from chapter 3 of the Quran, The family of Imran. Members of this blessed family include Prophet Zachariah, Mary and her son Prophet Jesus, and the prophet Christians refer to as John the Baptist. The chapter was revealed in Medina after the Battle of Badr. While the previous chapter was primarily addressed to the Children of Israel inviting them to Islam, this chapter extends the invitation to the Christians. It calls upon the People of the Book (Jews and Christians) to forsake their erroneous beliefs; whilst simultaneously warning the Muslims to be on their guard against malicious intentions and learn from the religious degeneration that plagued the followers of the previous revelations.

Verse 78 come shortly after the verse where God asks the People of the Book why they mix the truth with lies and knowingly conceal the truth. Some followers of the previous Scriptures twist their words and bend their tongues when reading from their books. They mispronounce words by deliberately putting their tongues in the wrong position. Anyone who has ever tried to learn another language understands that the position of the tongue makes a great deal of difference in pronunciation.

Corrupt religious men literally twist their tongues to mispronounce words, and give distorted meanings to religious texts. One example of such distortion and deliberate misinterpretation relates to their invented beliefs about Jesus, son of Mary.  Religious men deliberately changed God’s words in order to lead others astray. They said it is the word of God when it was not, and it did not concern them at all that they contradicted the basic principles of faith.

Elaborate lies were designed to prove the divine nature of Jesus and declare the Trinity, "the Father, the Son and the Holy Spirit." Throughout parts of the pagan world the Christian hierarchy added to and distorted the Christian faith in order to make it more palatable to those being asked to give up their previous beliefs. Nowadays we are blessed with high rates of literacy and access to knowledge and that makes it possible to discern the difference between the truth and a lie. In the past people would take the word of their religious leaders. If the chief rabbi or Pope said something was a fact it would trickle down to the masses without being questioned.

In verse 79, God refutes the false allegations about Him. It is not possible He says, that someone who has been granted prophethood would order the people to worship him as God. This verse, and the verses before it, were revealed after some of the Jews of Medina, and later a delegation of Christians from Najran, approached Prophet Muhammad, may the mercy and blessings of God be upon him, asking him questions about faith. The visit by the Najran Christians could be thought of as the first interfaith dialogue between Christians and Muslims.  It would set the tone for all the treaties the Muslim nation made with Christian communities.

A prophet would never demand that the people worship him.  It goes against his mission, which is to call people to worship One God, without partners or associates. A person who has been given wisdom and prophethood would do just the opposite; they would call others to be devout worshippers of God. Part of the mission is to teach and instruct in such a way that a prophet’s followers would be encouraged to worship in the most perfect way possible.

A prophet is a link that connects people to God. They do not force others to worship rather they educate and train people to recognize the Oneness of God. In addition to this, they are devoted to their revelation and teach only what it advocates. Any teaching that encourages the worship of anything or anyone other than God, or raises a servant of God to the position of a god, cannot be anything but a lie. If this distortion of a prophet’s character is found in one of God’s revealed Scriptures, it must be taken as evidence that the Scripture was interfered with.

Verse 80 makes it clear that a prophet would never even call to the worship of angels. Angels are beings that are incapable of doing anything other than worship God. Part of every prophet’s mission is to call the people to goodness and they would never call to a source of harm. Worshipping other than God is harmful to people, in this world and in the Hereafter. The prophets came to provide guidance and set an example to follow so that people would be devout servants of God.

When these verses were revealed there was a small band of hypocrites among the companions who tried to create mischief and chaos in the ranks of the believers. These three verses warn the believers not to allow the religious and moral degeneration of the former communities to take root in their own communities. In addition to this they advise them to be on their guard for malicious intentions and absurd objections.