Description: This chapter refers to an uncle of the Prophet who opposed him fiercely, as did his wife.  He insulted the Prophet with ‘Tabban Lak’ (‘may you perish!’).  This Meccan chapter was the response. 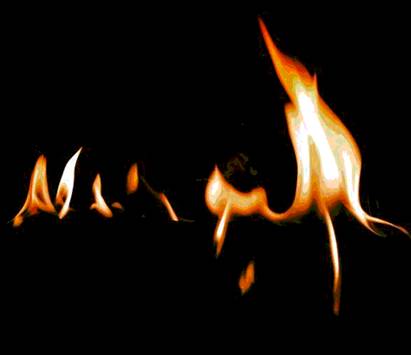 Abu Lahab was the uncle of Prophet Muhammad, may the mercy and blessings of God be upon him.  Lahab means flames and hence he was nicknamed so because of the radiant look on his face.  Together with his wife, Abu Lahab was one of the most hostile opponents of God’s Messenger and the ideas he propagated.

Rabi`ah, son of `Abbad, recalls, "When I was young, I once watched, with my father, God’s Messenger preaching Islam to the Arab tribes, saying ‘O sons of...  (calling their respective tribal names), I am God’s Messenger sent to order you to submit to, and worship Him alone, invoking nothing else beside Him, and to believe in me and protect me until I carry out what God has entrusted to me.’ A cross-eyed, bright-faced man was behind him, who used to say, after he had finished, ‘O sons of...  this man wants you to forsake al-Laat and al-`Uzza (two idols worshipped by the pagan Arabs) and your allies of the jinn, the children of Malik ibn Aqmas, and to substitute for them these innovations and nonsense he has come up with.  Do not listen to him, nor follow what he preaches.’ I asked my father who that man was and he told me that it was Abu Lahab, the Prophet’s uncle."

One day the Prophet went out to a large square in Mecca, climbed a hill and summoned the people of the Quraysh.  When they came to him, he addressed them, saying, ‘Were I to tell you that an enemy is drawing near and will attack you tomorrow morning or evening, would you believe me?’ ‘Yes,’ they replied.  ‘O listen to me,’ he went on, ‘I am warning you of (God’s) gruesome torment.’ Abu Lahab was there and snapped at him, ‘Damn you! For this have you called us?’ Then this chapter was revealed.

Another instance was when the clan of Hashim, Prophet Muhammad’s own clan, under Abu Ţalib’s leadership, decided on grounds of tribal loyalty to protect the Prophet despite their rejection of the religion he preached.  Abu Lahab was the only one to take a different stand.  Even though he belonged to the same clan, he joined with the opposing Quraysh instead, and was with them in signing the document imposing a complete social and business boycott on the clan of Hashim to starve them out unless they delivered the Prophet to them.

Abu Lahab also ordered his two sons to renounce Muhammad’s two daughters to whom they had been engaged before Muhammad’s prophetic assignment.  His aim was to burden the Prophet with their living and welfare expenses.

Thus, Abu Lahab and his wife, Arwa, who was also called Umm Jameel, continued with their persistent onslaught against the Prophet and his message.  The fact that they were close neighbors of the Prophet made the situation worse.  We are told that Umm Jameel used to carry thorns and sharp wood and place them along the Prophet’s path.

This chapter was revealed as a counterattack against Abu Lahab’s and his wife’s hostile campaign.  God took it upon Himself to say the final word on behalf of His Messenger.

Verses 1-3 The punishment of Abu Lahab

The Arabic term, tabba, rendered as ‘doomed’ also signifies failure and cutting off.  The term is used twice in two different senses.  It is used first as a prayer, while in the second instance it implies that the prayer has been already answered.  So, in one short verse, an action is realized which draws the curtains upon a battle scene.  What later follows is merely a description of what took place with the remark that "his wealth and his gains shall avail him nothing." (Verse 2) He can have no escape.  He is defeated, vanquished and damned.  This was his fate in this world, but in the Hereafter "he shall have to endure a flaming fire." (Verse 3) The fire is described as having flames in order to emphasize that it is raging.

Verses 4-5 The punishment of his wife

"And his wife, the carrier of firewood," will reside there with him having "a rope of palm-fiber round her neck," with which, as it were, she is being dragged into Hell, or which she used for fastening wood bundles together, according to whether a literal or metaphorical interpretation of the text is adopted.

The language of this chapter achieves remarkable harmony between the subject matter and the atmosphere built around it.  Hell, with its fiercely burning lahab, or flames, will be inhabited by Abu Lahab.  At the same time his wife, who collects thorns and sharp woods, materials which can significantly increase the blaze, will be met with the same fire with a rope tied round her neck, bundled like firewood.  How perfectly matched are the words and the pictures portrayed: the punishment is presented as being of the same nature as the deed: wood, rope, fire and lahab!