Description: Those who doubt are warned, God teaches a lesson via the stories of the prophets, and we hear an unearthly conversation. 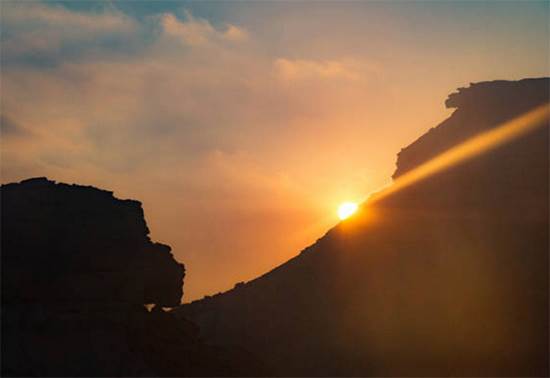 The thirty-eighth chapter of the Quran was revealed in Mecca and like all Meccan chapters it emphasizes the fundamentals and basic concepts of Islam.  Sad’s eighty-eight short verses discuss the Oneness of God, the Day of Judgment, and the previous prophets.  It compares the arrogance of the unbelievers of Mecca to the arrogance found in previously destroyed nations, and with the arrogance of Satan.

This chapter begins with the Arabic letter sad.  The use of one or more Arabic letters at the beginning of a chapter is a narrative device used in this and 28 other chapters of Quran.  The reason and the meaning of this is the subject of much speculation, however the answer is known only to God.  God swears an oath by the Quran, the book that serves a reminder to all of humankind.  Those who disbelieve are occupied with nothing but arrogance and defiance.  God has destroyed many generations before them for such arrogance and every one of them cried out in despair but it was too late.  A warner has come to them (Meccan disbelievers) from among themselves but they do not accept this, and call him a liar or a magician.  Why would the message be sent to him (Prophet Muhammad, may the mercy and blessings of God be upon him) they think to themselves and say, did he turn all the gods into One God? Don’t believe him, hold fast to your religion, the religion of our forefathers.

They doubt because they have not yet tasted the punishment.  Do the disbelievers possess God’s treasures or have control over the heavens and the earth?  If so let them ascend and dictate to God.  They are just an armed alliance that will be crushed.  The people of Noah, and Aad and Pharaoh denied their messengers.   The people of Thamud, and Lot and Midian formed alliances against their messengers.  They all called their messengers liars; God’s punishment was justified.  They wait for nothing but a single blast heralding the Day of Judgement and they will wish that they could have their punishment in this life.  Prophet Muhammad is advised to bear their words and be patient.

Remember God’s servant David, who sang the praises of God.  He was joined by both the mountains and the birds.  God strengthened his kingdom and gave him wisdom, sound judgment and discerning speech.  There is a story of two litigants who climbed over a wall alarming David in his prayer chamber.  They asked him to judge between them.  David passed judgment and realized that he had been put into this position as a test from God.  He sought forgiveness for any errors, such as fear and suspicion of the two men at the outset, and any mistakes in judgement he might have made, such as not being impartial in his judgement. God forgave David and reminded that he was a vicegerent on earth, who should rule with justice and not follow his own desires.  Those who stray will face a severe punishment.  The heavens and earth and all that is in between were not created without a purpose.  Those who do well are not treated the same as the ones who do mischief.  The blessed Quran has been sent down so that humankind can ponder its verses and learn a lesson from it.

God gave David a son, Solomon; he was an excellent servant to God.   He became obsessed with his beautiful racehorses and became distracted from remembering God.  He realized his mistake and sent the horses from his sight.  (Some scholars say that he slaughtered them).   Solomon was tested and he became so ill that he was like a walking skeleton.  Solomon repented and turned back to God.  Solomon asked for forgiveness and more power than anyone else would ever have.  God gave him power over the wind and the jinn.

And remember God’s servant Job when he called out in distress because Satan had afflicted him with suffering.  God gave him cool water and restored and multiplied the family members that had deserted him.  God relieved Job of the oath he made to beat his wife by instructing him to strike her with blades of grass.[1] God’s servants, Abraham, Isaac and Jacob were men of vision; Ishmael, Elisha and Dhul Khifl were outstanding among men.

This is a reminder, the gates of Paradise will open to the righteous and their provision will never end.  In contrast, the rebellious and wrongdoers will burn in Hell with other punishments of various kinds.  The followers will be thrown in after their leaders.  Some will pray that their leaders be doubly punished and they will all wonder why the ones they used to ridicule were not there with them.  The people of the Hellfire will continue to argue and blame one another.

Prophet Muhammad must tell them that he is only a warner and that there is no deity but God.  He delivers a mighty message which they choose to ignore, and he has no knowledge of what is discussed in the heavens.  Prophet Muhammad knows only what is revealed to him.  The discussion was between God, the angels, and Satan.  God told the angels that He was going to make a human being out of clay and that when he was done they should bow down before it.  They did, all of them except Satan (sometimes called Iblees), because he was arrogant.  Satan thought himself better than Adam (the human being) because he was made from fire rather than clay, so God banished and cursed him until the Day of Judgment.  Satan asked for respite until that Day and he was granted.   He swore to God that he would use the time to mislead all human beings except the ones that are sincerely devoted to Him.  God told Satan to listen to the truth; He intended to fill Hell with Satan and all of his followers.

Prophet Muhammad must tell the people that the Quran is a reminder and that he does not ask for any payment, nor does he pretend to be something other than a man with a message and a warning.  In time, everyone will know that he speaks the truth.

[1] Scholars say that when Job’s wife blasphemed, he swore that when he was recovered he would beat her with one hundred lashes.  Later he regretted his hasty oath.