Description: The first five verses of the 96th chapter of the Quran are the first verses revealed to Prophet Muhammad. 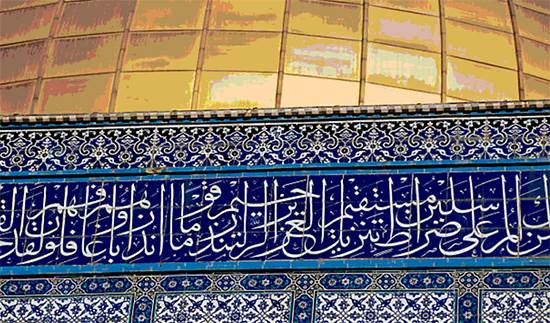 "Al-ʿAlaq" is an early Meccan chapter.  The first five verses are considered by most to be the first verses of the Quran to be revealed; the remaining verses were revealed later in the Meccan period when opposition to the revelation arose among the leaders of the Quraysh.  This initial revelation is said to have taken place during the last third of the month of Ramadan, in 610 of the Christian era, twelve years before the migration to Madina (hijrah) in 622, which marks the beginning of the Islamic calendar.

Verses 1-5 An injunction to read, seek knowledge, and learn how to write

The event of the beginning of revelation has immense significance.  With reference to God, it signifies that He is the source of all great bounties and unfailing compassion.  He is the Benevolent, the Loving, who bestows His mercy and benefactions for no reason except that benevolence is one of His divine attributes.  As for man, this event signifies that God has bestowed on him an honor the greatness of which he can hardly ever appreciate and for which he can never show enough gratitude, not even if he spends all his life in devotion and prostration.  This honor is that God has taken notice and care of him, established contact with him and chosen one of humans as His Messenger to reveal to him His words; that the earth, man’s abode, has become the recipient of these divine words, which the whole universe echoes with submission and devotion.  The great event specified the source man should look up to in order to derive his ideals, values and criteria.

The chapter instructs God’s Messenger, Muhammad, may the mercy and blessings of God be upon him, right at the very first moment of his blessed contact with the Lord and before taking his very first step in delivering the message, to read in the name of God.  The chapter then states the source of learning, which is God.  From Him man receives all his knowledge, past, present and future.  From Him man learns any secret revealed to him about this universe, life and himself.

It is God who creates, teaches and bestows His abundant bounties on man.  This implies that man should acknowledge God’s benevolence and be grateful for it.  But what actually happens is something different.

It is God who gives to man in abundance and makes him independent.  He also creates and teaches him and extends to him His generous treatment.  But men in general — except for those guarded by faith — are not thankful for their independence which is made possible by what they are given.  They do not recognize the source of this grace, which is the same as the source of their creation, knowledge and livelihood.  They behave arrogantly and transgress all limits instead of being dutiful and thankful.  All must refer to God in every matter, thought or action.  He is the only resort and refuge.  The good and the bad, the obedient and the sinner, the righteous and the wrongdoer, the rich and the poor, will all return to Him.  Even the man who tyrannizes when he thinks himself independent will come to Him eventually.

The chapter lays down the essential components of the Islamic ideological concept: creation, education and honor come from God alone, and to Him all will return.

This section of this short chapter tackles a particularly appalling form of tyranny of the person who prevents a servant of God from praying! Its description in the inimitable Quranic style fills us with wonder and dismay that it should take place at all.  Our dismay is enhanced by the manner of expression which takes the form of address and conversation, using short sentences that follow in rapid succession.  The effect can hardly ever be produced by ordinary written language.

The transgressor outdoes himself by taking a still more abhorrent stand by denying the truth and turning his back.  Thus, we have a scene of tyranny trying to suppress the call of faith and obedience to God.  This is followed immediately by a stern warning stated explicitly this time.  The dragging is by the forelock, the part of the head raised high by every conceited tyrant.  It undoubtedly deserves to be hit violently.

In light of this frightening destiny for the unbelievers, the chapter concludes with an instruction to God’s obedient servants to persevere and follow the path of faith.  Do not obey this tyrant who tries to stop you from offering your devotion and conveying your message.  Prostrate yourself before your Lord and bring yourself closer to Him through worship and obedience.  As for the tyrant, leave him to the guards of Hell who are sure to mete out to him what he deserves.