Description: A brief commentary of Chapter 5 of the Quran.  It discusses food, hunting, the pledges made by the Jews and Christians, the afterlife, and the feast of Jesus.

Verses 87-108 Good things which God has made lawful, ruling on oaths, wine, gambling, and some other prohibited practices, hunting, directions to the believers, testimony at the time of bequest 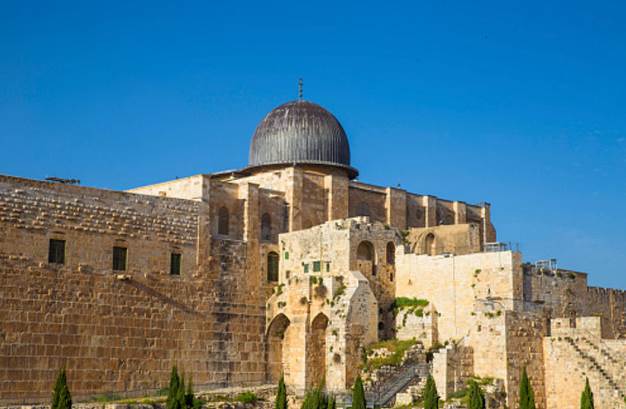 Forbidding good things that God has made lawful is not a sign of piety.  Being excessive is displeasing to God, but consuming good food in moderation is perfectly fine.  God does not take us to account for breaking thoughtless oaths.

God asks to obey Him and His messenger and to be on guard, but if people chose not to pay heed, then the messenger is only supposed to deliver the message clearly.  Those who believe and do good deeds cannot be blamed for what they consumed in the past as long as they are mindful of God, have proper belief, and follow it with good works.  After all, God loves those who do good.

No one is allowed to hunt while performing pilgrimage to Mecca.  Anyone who kills a game intentionally must atone for it.  Catching and eating seafood is nevertheless allowed.  God is merciful and at the same time severe in punishment.

The duty of Prophet Muhammad, may the mercy and blessings of God be upon him, is to deliver the message, not to force people to accept it.  Good and bad are not the same.  Too much questioning of matters might make things difficult; God’s silence sometimes is because He is forgiving and forbearing.

When asked to surrender to God’s revelation, people are said to use their reason, but they tend to follow the path of their ancestors.  You are responsible for yourself if you believe.

Leave a will before death.

As such, this passage aims to establish the truth about God and servitude to Him as conceived by Islam.  This truth is presented through a great scene portrayed here in which Jesus speaks in front of all of God’s messengers and rest of humanity.  The chapter presents this truth in a vivid scene taken from the Day of Judgement in the same way as the Quran presents various scenes of that great Day.  In all such presentations, the picture is portrayed in such an inspiring, vivid and effective way that we almost see it before our very eyes.  We hear what is being said and feel every reaction and response.

God will ask the prophets he sent to people as to what response they got.  Jesus will be reminded of God’s favors and miracles he performed with God’s permission: speaking to people from the cradle, knowledge of the Scripture, the Torah, and the Gospel, and wisdom, making birds out of clay that would turn alive when Jesus breathed into them, healing the blind and the leper, bringing the dead back to life, protection when people tried to harm him when he showed them signs, and the disciplines believing in him and devoting themselves to God.

The disciples requested Jesus to ask God to send down a feast for them from heaven.  Jesus warned them, to which they responded that they simply wish to eat and to have their hearts reassured and that he has told them the truth and be witnesses to it.  Jesus then prayed to the Lord to send down a feast from the heaven.  God accepted the prayer of Jesus, but cautioned that anyone who disbelieves after seeing the sign will be given an exemplary punishment.

On the Final Day, God will ask Jesus if he demanded people to worship him and his mother, Mary, in his earthly ministry.  God knows very well what Jesus said to people.  But this worrying interrogation on that fearful Day is intended for people other than the one to whom it is addressed.

Jesus will plead innocence and will state that he never did and had no business asking people to worship him.  Had he done so, God would have known as He knows everything unseen.  Jesus’ answer is tinged with awe and fear.  He starts by glorifying God and follows this immediately with an absolute denial of any such thoughts or of any such claims.  Jesus will declare that he said nothing to his community other than calling on them to worship God alone, and stating that, like them, he is no more than God’s servant.  He will then disclaim any responsibility for what they did after the end of his time on earth.  Jesus will conclude with leaving the fate of his people absolutely to God, stating at the same time that they are His servants and at His disposal.  God can forgive them or punish them.  Whether He decides on one course or the other, that decision is based on His wisdom.

"This is the Day when the truthful will benefit from their truthfulness." This is God’s word at the end of that interrogation beheld by all creatures.  It is the final and decisive word.  It is coupled with the reward that befits truthfulness and those who are truthful.