Description: A brief commentary of Chapter 5 of the Quran.  It discusses food, hunting, the pledges made by the Jews and Christians, the afterlife, and the feast of Jesus. 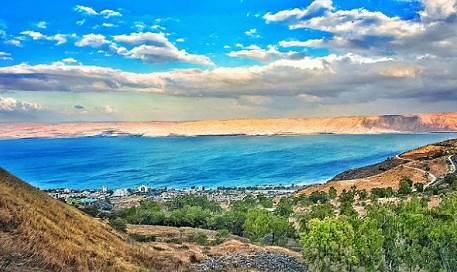 The chapter relates to food, and a central theme is the regulation of lawful and unlawful food, obedience to which is considered as part of the pledge between God and the believers.  It also talks about hunting for food during the pilgrimage.  God had also taken pledges from the Jews and Christians and the chapter deals with what they did to their pledges.  Some passages deal with the afterlife and the verdict of the messengers on the behavior of their communities.  Jesus is mentioned when his disciples asked him to pray to God and of his renouncing any claim to divinity.

You are forbidden to hunt while you are on pilgrimage, but when you have completed the rites of pilgrimage you may hunt.  Do not let your hatred for some people make you to break the law.  Help one another to do what is right and do not help one another towards sin.

You are forbidden to eat carrion, blood, pig’s meat, any animal over which any name other than God’s has been taken, and anything sacrificed on altars.  Also, any permissible animal that is strangled, or is a victim of a violent blow or fall, or is gored or savaged by a beast of prey, is also forbidden unless you are able to slaughter it before its death.

Today I have perfected your religion for you, completed My blessing upon you, and chosen for you Islam as your religion.  If any of you is forced by hunger to eat forbidden food, with no intention of doing wrong, then God is most forgiving!

God does not wish to place any burden on you: He only wishes to cleanse you and perfect His blessing on you, so that you may be thankful.

Verses 7 – 32 God’s covenant, favors, and command of doing justice, some conditions of the People of the Book, Moses’ experience with the Jews, Adam’s two sons, and inviolability of the human soul

Faith is the vow that binds God and His subjects.  The subject vows that he will remain aware of God in his life and God guarantees that He will be His subject’s guardian in this world and in the life to come.  God’s subject must prove his fulfillment of vows in two ways.

First, he stays steadfast on the path of God.  On every occasion, he should give the response expected of a subject to his Lord.  When he observes the universe, his mind should be filled with the realization of God’s glory and power.  When he looks at himself, he should realize that his existence is entirely due to God’s grace and His mercy.  If his emotions erupt, they should erupt for the sake of God.  If his attention is focused on anybody, it should be on God.  His fears should be linked with God.  The remembrance of God should be uppermost in his mind.  He should be given to prayer and obedience to God and should spend his assets for the cause of God.

Second, for the fulfillment of the vow of God’s subject is that his dealings with his fellow-beings should be based on justice and fair play.  Justice means meting out to a person that treatment which he deserves – no more and no less.  In his dealings, he should follow the dictates of justice and not his desires.  He should be bound by this principle to the extent that he should adhere to justice even when dealing with his enemies; even when grievances and bitter memories are apt to divert him from the path of justice.

A pledge was taken from the Children of Israel by their prophet that they would lead a godly life, and twelve chiefs from their twelve tribes were appointed to keep a watch over them.  The pledge taken from the Children of Israel was they would make themselves godly by offering salat (prayers), that they would discharge the rights of others in the shape of zakat (obligatory charity), align themselves on the side of God by supporting His prophets, and spend their assets in support of the struggle for the religion of God.  It was only after undertaking all this and after establishing a collective system among themselves for ensuring the continued fulfillment of these duties that they were entitled to God’s company and support.  One attains Paradise by performing good deeds and not due to any racial relationship.

The People of the Book went astray by omitted some teachings from their religion by means of deliberate misinterpretation or distortion.  They also imposed upon themselves restrictions which had not been ordained by God.

Considering any community as God’s favorite is a meaningless thought.  Everybody will get his reward before God according to his deeds.  Every man’s future will be decided based on his performance in this world of test and trial.  Neither Paradise nor Hell is the native place of any community.

Cain was instructed by means of a crow how to bury the dead body under the ground.  This points to the fact that man was less knowledgeable than the animals about the ways of nature.